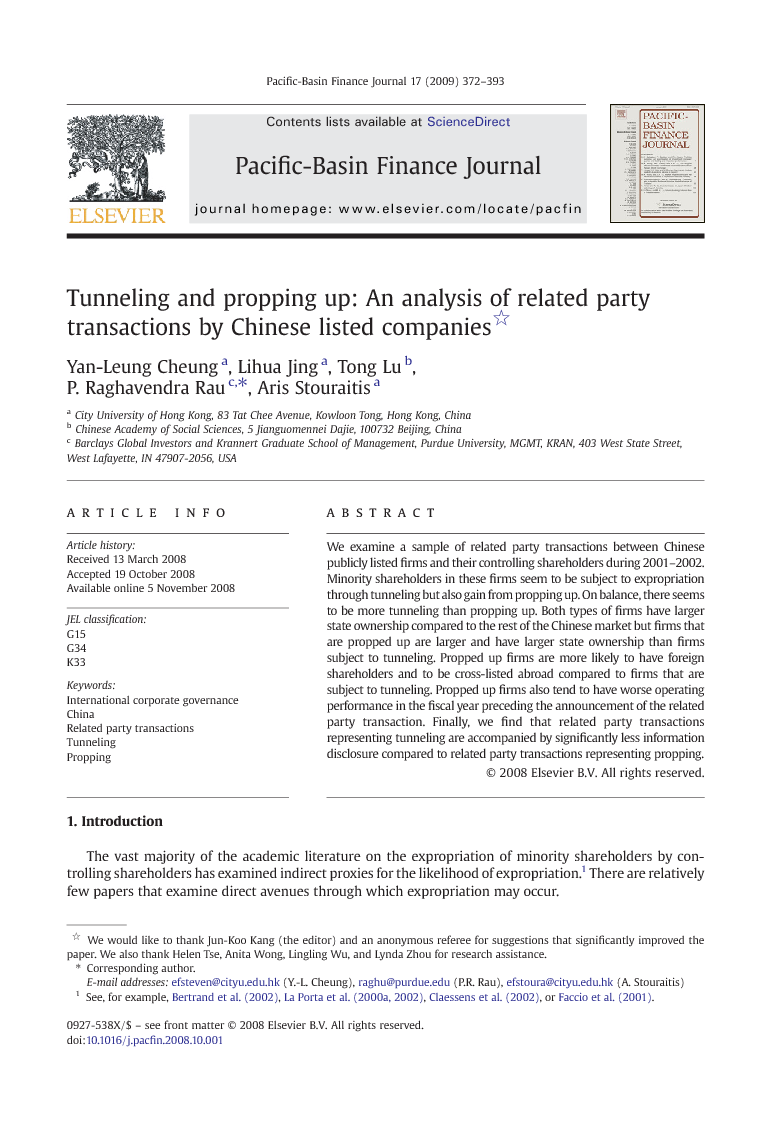 We conclude that minority shareholders in Chinese publicly listed firms that conduct related party transactions with their controlling shareholders are subject to both expropriation through tunneling and gain from propping up from these transactions. On balance, there seems to be more tunneling than propping up in our sample. Both types of firms have larger state ownership compared to the rest of the Chinese market but firms that are being propped up are larger compared to firms that are subject to tunneling. Propped up firms are more likely to have foreign shareholders (B-shares available to foreign investors in the Chinese stock markets), and to be cross-listed abroad (H-shares available to Hong Kong investors, and ADRs available to U.S. investors) compared to firms that are subject to tunneling. Not surprisingly, propped up firms also tend to have worse operating performance in the fiscal year preceding the announcement of the related party transaction. Finally, we find that related party transactions representing tunneling are accompanied by significantly less information disclosure compared to related party transactions representing propping up. Our results are accompanied by two caveats. First, our study is conducted during a period when the Chinese economy has been expanding rapidly. We cannot test whether the Chinese firms which are subject to potential expropriation during periods of growth, are also more likely to be bailed out during periods of economic distress that accompanies economic downturns. Therefore, our results may understate the incidence of propping. Second, we examine large related party transactions, for which stock exchange notification is required. We cannot establish the impact of transactions that are below the thresholds that require stock exchange notification or illegal transactions that companies do not disclose. Our results contribute to the literature in three ways. First, we add China to the small list of countries where tunneling has been examined in studies that use direct proxies for expropriation. Second, we provide a more detailed analysis of propping compared to other studies. As a phenomenon, propping has received considerably less attention compared to tunneling, although it has been argued that essentially they are the opposite sides of the same coin (Friedman et al., 2003). Finally, we highlight the impact of corporate governance, information disclosure, and firm performance proxies both on the likelihood of tunneling or propping and on the value gains or losses that publicly listed firms experience in these transactions. Our results have two regulatory implications for emerging markets. First, we highlight the importance of foreign investors and cross-listing in mitigating the expropriation of minority shareholders. This suggests that the sophistication of the firm's shareholder base may be very significant in preventing expropriation. It also suggests that higher listing and accounting standards provide additional protection from expropriation. These have important implications for allowing foreign investors to participate in emerging markets and in strengthening accounting standards in these markets. Second, our results suggest that higher standards of disclosure with respect to the transaction itself also help mitigate the expropriation of minority shareholders through related party transactions.