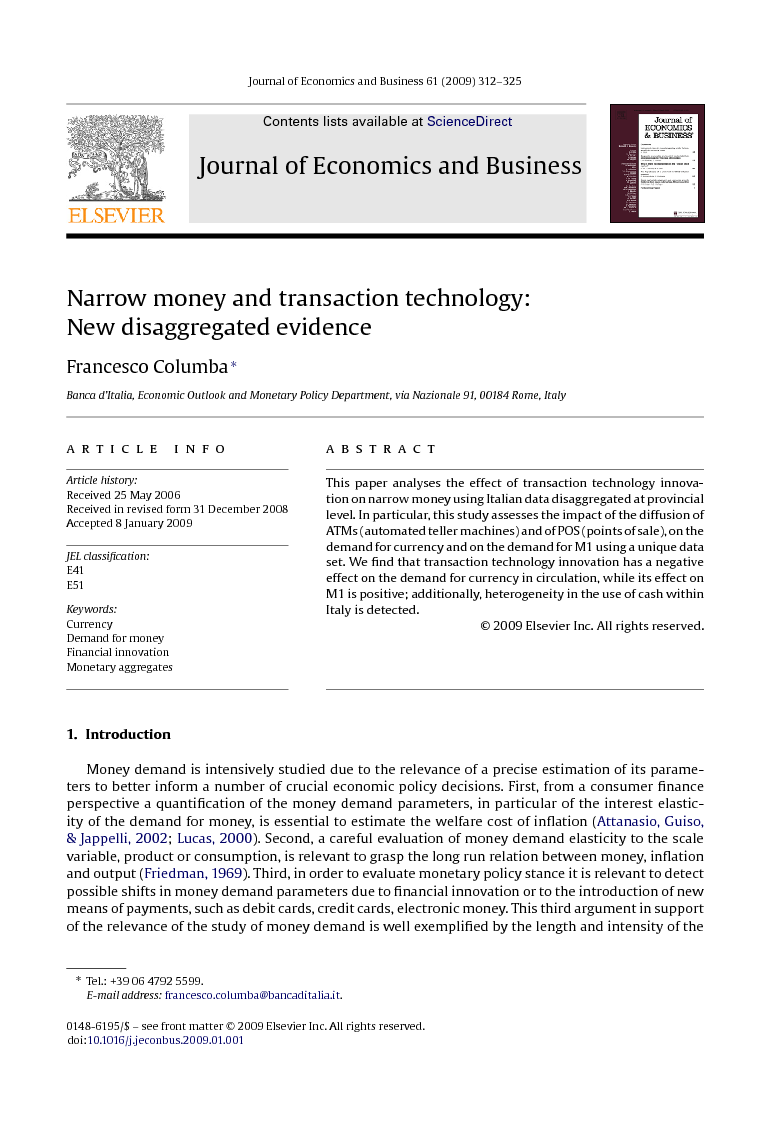 This paper analyses the effect of transaction technology innovation on narrow money using Italian data disaggregated at provincial level. In particular, this study assesses the impact of the diffusion of ATMs (automated teller machines) and of POS (points of sale), on the demand for currency and on the demand for M1 using a unique data set. We find that transaction technology innovation has a negative effect on the demand for currency in circulation, while its effect on M1 is positive; additionally, heterogeneity in the use of cash within Italy is detected.

Money demand is intensively studied due to the relevance of a precise estimation of its parameters to better inform a number of crucial economic policy decisions. First, from a consumer finance perspective a quantification of the money demand parameters, in particular of the interest elasticity of the demand for money, is essential to estimate the welfare cost of inflation (Attanasio, Guiso, & Jappelli, 2002; Lucas, 2000). Second, a careful evaluation of money demand elasticity to the scale variable, product or consumption, is relevant to grasp the long run relation between money, inflation and output (Friedman, 1969). Third, in order to evaluate monetary policy stance it is relevant to detect possible shifts in money demand parameters due to financial innovation or to the introduction of new means of payments, such as debit cards, credit cards, electronic money. This third argument in support of the relevance of the study of money demand is well exemplified by the length and intensity of the debate on the stability of US money demand (Duca, 2000; Duca & Van Hoose, 2004; Teles & Zhou, 2005). This paper studies the effect of the deployment of two types of terminal that innovated transaction technology, ATMs (automated teller machines) and POS (points of sale, the terminals where debit cards are used to settle transactions), on the demand for currency and on the demand for narrow monetary aggregate M1.1 The analysis takes advantage of a unique data set that tracks heterogeneity in the distribution of cash across provinces. We attempt at attenuating the problems stemming from a possible instability of money demand parameters or from an endogeneity of the parameters to the monetary policy with the exploitation of the cross-section variability.2 Estimates at the regional level of an area identified by a single currency and monetary policy are more precise than time-series estimates, since changes in the monetary policy reaction function can lead to changes in both money and nominal income over time, but not across regions. The first goal of this paper is to ascertain the effect of the diffusion of ATMs and of POS on the demand for currency. It is worthwhile pursuing this objective, not only because of the need of understanding movements in money demand for the economic policy reasons above mentioned, but also because of the unsettled empirical evidence on the effect of lower transaction costs stemming from the adoption of new technologies on currency demand. The decrease in transaction costs that we exploit empirically is represented by the diffusion of ATMs and POS that leads to a reduction in the shoe-leather cost of withdrawing currency. Moreover, while the effects of the diffusion of ATMs was widely investigated, the effects of the diffusion of POS, that enhances the use of debit card as alternative to cash to settle transactions, to our best knowledge, was not analyzed thoroughly in theoretical models. Intuitively, however the increase in the spread of POS, analogously to that of ATMs, should lead to lower transaction costs, inducing a decrease in the average holding of cash. The second objective is to evaluate the overall effect of ATM and POS diffusion on the demand for a more ample monetary aggregate, M1 (i.e. currency and demand deposits), to assess how the negative effect of transaction technology innovation on currency in circulation compares with the positive effect on demand deposits that arises from a decrease in the opportunity cost of holding a positive balance on the account.3 Partly due to a lack of disaggregated data for currency in circulation, the effect of the spread of new transaction technologies on M1 was not studied before. To achieve the two objectives above enunciated, we take advantage of the natural experiment represented by the introduction of the euro that let us build a unique measure of the currency in circulation at the provincial level. The data set comprises data on the daily inflows and outflows of lira and euro banknotes in Italy through the branches of the Bank of Italy, that acted as cash offices. We cumulated all the euro banknotes put in circulation in all the working days since January 2 to March 29, 2002 (subtracting the notes that during the period were withdrawn from circulation), province by province, and we obtained stocks of euro increasing through the period observed. To derive the euro stocks we therefore exploited 5985 observations, each constituted of the net flow of euro banknotes for the province i (ranging between 1 and 95) and for the date t (ranging between 1 and 63). Our assumption is that in the first 3 months of 2002 the flows of euro banknotes between the different provinces were negligible so that the stocks built are reliable enough. This data set enables us to assess the impact of the diffusion of ATMs and POS on currency with actual cross-section data allowing us to address heterogeneity in financial development that is relevant to Italy, especially regarding currency and payments (Fig. 1 displays the euro per capita stock in Italian provinces). To our knowledge, data on currency with such a degree of disaggregation were not used before. In Italy the remarkable differences between the areas of the country with regard to two of the traditional determinants in the use of cash, the alleged “greyness” of economy and the degree of financial sophistication,4 provides a strong motivation for analyzing cash with provincial data. Moreover census data on currency disaggregated by province were not available until now. Only data derived from sample surveys were available and they may suffer from not being representative of the stock of currency in all the provinces we consider. The data set we build is derived from first-hand data used to construct the monetary aggregates that we are interested in. Nevertheless to avoid relying only on one cross-section of data at the point in time when the euro was introduced, and to check for the robustness of our results to heterogeneity in the degree of financial development across Italy we also estimate panel regressions with fixed provincial effects, assuming that the distribution of currency observed in 2002 was similar in nearby years.5

This study makes two contributions to the literature on money demand. First, it provides an unprecedented estimate of currency at a very disaggregate level taking advantage of the natural experiment represented by the introduction of the euro in Italian provinces. Second, using disaggregated data the study estimates the effect of transaction technology innovation on currency and M1 demand. One major finding for currency demand, on the basis of cross-section results, is that ATM technology has significantly negative effects, with a 1% rise in ATM reducing currency by 0.28%. Another result is that estimates of the income elasticity decrease in magnitude when ATM and POS are accounted for. Lastly, the effect of the opportunity cost is generally not statistically significant while the effects of an increase of 1% of the number of POS on currency is negative by 0.20%, but loses its significance when estimated jointly with the ATM term. The analysis of M1 yields the following results; the estimated effect on M1 of increasing the number of ATM is positive, at 0.14%, when considered jointly with POS; that of an increase of the number of POS is positive, at 0.18%; income elasticity estimates are smaller in size and decreases when ATM and POS are accounted for, while the effect of the opportunity cost is negative and significant. These findings suggest that ATM and POS diffusion has overall a negative effect on currency in circulation. The total effect on M1 of the two forms of transaction technology innovation considered is positive. The overall effect on M1 may have to be considered with caution due to the particular period examined, the cash changeover, and to a not clear support of theory due to the difficulty of finding an empirical counterpart of the theoretical aggregate “transaction money”; nevertheless, support for the positive effect on M1 could be provided, in a portfolio demand approach, where alternatives to M1 may be found in the larger aggregate M3. The payment innovations induce shifts in the composition of M1 away from cash towards demand deposits. The empirical evidence is consistent with the hypothesis that not accounting for transaction technology innovation may result in a serious omitted variables bias for traditional money demand elasticity estimates as well as in a poorer model fit when estimating money holdings. The results provide insights into the effects of new payment technologies on the monetary aggregates of concern to central banks. Moreover the possible offsetting effects of the payment technology innovation on the currency and demand deposit components of narrow monetary aggregates are relevant to assess the velocity of money. The findings imply that estimating the trend of money velocity should take account of the diffusion of new payment technologies. Consistently with money demand theory, the spread of transaction technology innovations has the anticipated effects on the currency and demand deposits components of M1. The total net effect on M1 is positive, with the negative effects of POS and ATMs terminals on currency more than offset by positive effects on demand deposits. Further research on this topic may be relevant for the analysis of money demand in the euro area. First, the introduction of the euro likely affected the attractiveness of cash and reduced the need to hold several European currencies. Second, the ongoing process of financial innovation is likely to continue altering the empirical behavior of money demand not only in the euro area, but also elsewhere. Given the generally more advanced state of transactions technology in Europe and the heterogeneity of technology adoption within the single currency euro area, findings in Europe may provide insights on the impact of technology on money demand outside of Europe.