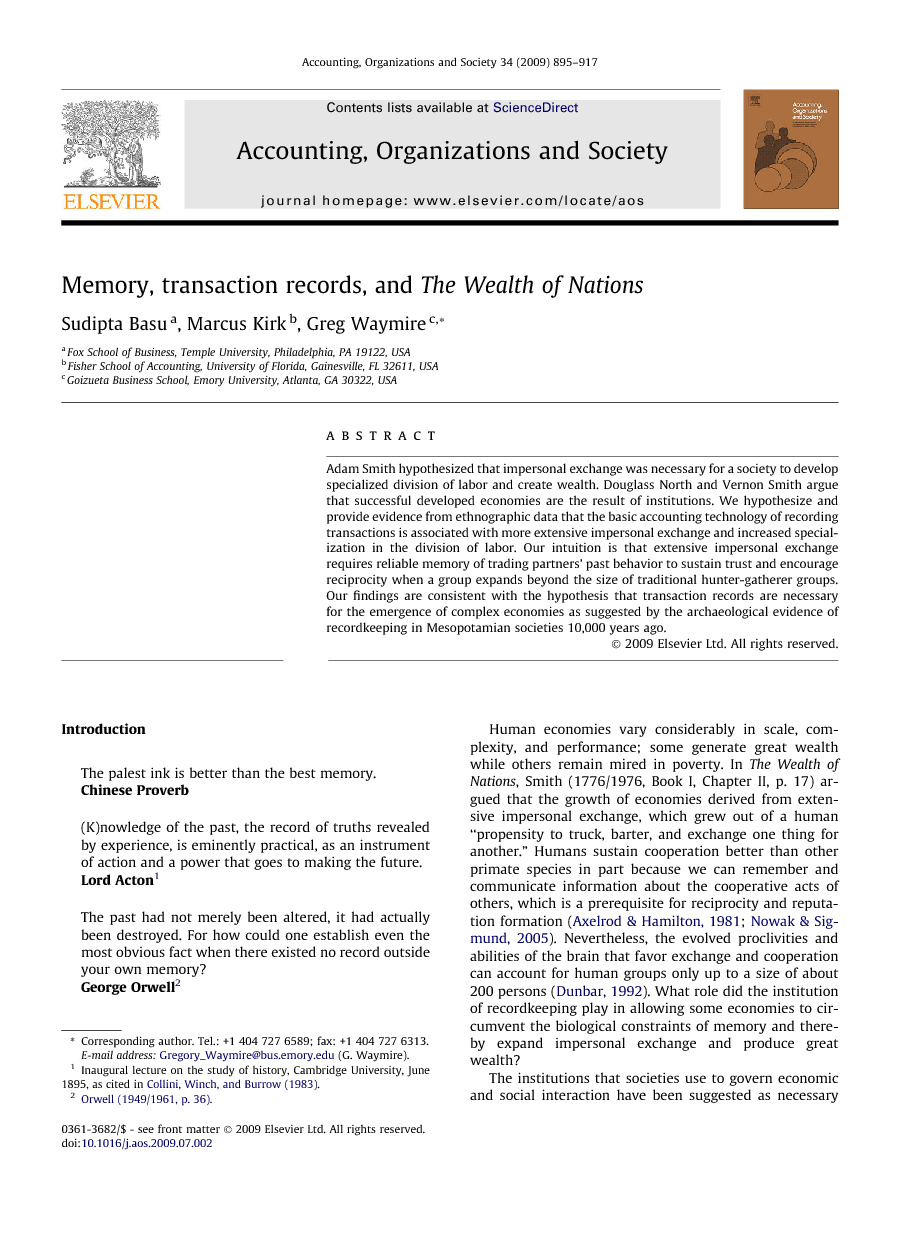 Adam Smith hypothesized that impersonal exchange was necessary for a society to develop specialized division of labor and create wealth. Douglass North and Vernon Smith argue that successful developed economies are the result of institutions. We hypothesize and provide evidence from ethnographic data that the basic accounting technology of recording transactions is associated with more extensive impersonal exchange and increased specialization in the division of labor. Our intuition is that extensive impersonal exchange requires reliable memory of trading partners’ past behavior to sustain trust and encourage reciprocity when a group expands beyond the size of traditional hunter-gatherer groups. Our findings are consistent with the hypothesis that transaction records are necessary for the emergence of complex economies as suggested by the archaeological evidence of recordkeeping in Mesopotamian societies 10,000 years ago.

Our evidence suggests that recordkeeping is more likely in large groups that cannot sustain cooperative interaction based solely on mental memory, and that recordkeeping, like money and inheritance of land, emerges at relatively early stages of an economy’s development. The emergence of recordkeeping precedes the appearance of a judiciary, administrative hierarchies and the extension of credit, suggesting that recordkeeping is a foundational institution. Our evidence also suggests that economies where recordkeeping is possible are characterized by more extensive impersonal exchange. Consistent with hypotheses by Smith (1776/1976) and Stigler (1951), we also find that the level of specialization in division of labor and accumulated capital are strongly influenced by the extent of the market. These findings suggest that the basic accounting function of recordkeeping is a precursor to economic development through impersonal exchange and division of labor. More broadly, our evidence is consistent with the hypothesis that transaction records external to the human brain are necessary to extend the scale of human cooperation from small primitive groups to large-scale modern societies characterized by extensive market exchange and complex division of labor (Basu & Waymire, 2006). Our analysis also broadly accords with conjectures offered by an earlier generation of scholars (i.e., Sombart, Weber, Schumpeter, and von Mises) that capitalist economic development would be impossible without accounting institutions like double-entry bookkeeping (Carruthers & Espeland, 1991; Most, 1972). Thus, considerably more research on how recordkeeping and more advanced analysis of accounting’s transactional data promote economic development is warranted. Economic development varies considerably across continents and countries (e.g. World Bank, 2006), as well as within countries among different ethnic and sociolinguistic groups. Our evidence is consistent with De Soto’s (2000) argument that accurate property records are a prerequisite for the success of capitalistic societies. The crucial role of verifiable transaction records for legal enforcement of property rights is explicitly indicated in legal codes ranging from the ancient Code of Hammurabi (circa 1750 BCE) through Athenian, Roman and French legal codes to the recent Sarbanes-Oxley Act of 2002 (Basu & Waymire, 2006). Thus, verifiable transaction records are a necessary part of the foundations that lie beneath the exchange-supporting institutions upon which capitalist economies have been built. Accounting is likely an ecologically rational institution that coordinates economic interaction through market exchange (Waymire, 2009; Waymire & Basu, 2007). To adapt a metaphor from Simon (1990), historical cost accounting records and today’s exchange agreements are like two blades of scissors that have become increasingly effective together over time through co-evolution. Institutional changes such as ‘fair value’ accounting that overwrites historical records of consummated transactions and erodes the quality of memory inherent in records may make the scissors less effective unless a matching blade is produced.19 Contracts and regulations rely on a set of common expectations about how performance is measured, and wholesale changes to this performance measure may entail “unintended consequences.” One ultimate consequence of less effective recordkeeping may be the decay of economic institutions responsible for wealth generation in modern developed societies.