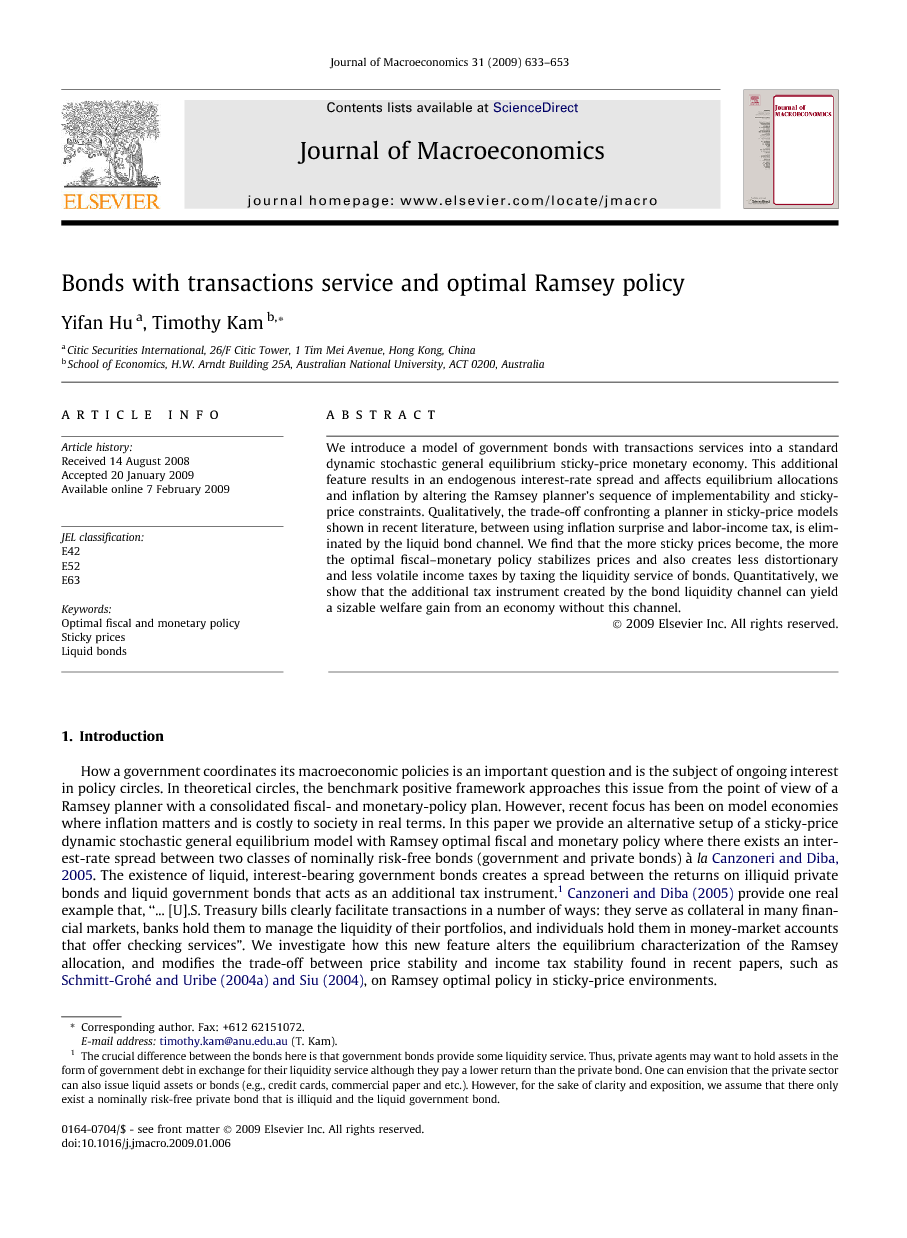 We introduce a model of government bonds with transactions services into a standard dynamic stochastic general equilibrium sticky-price monetary economy. This additional feature results in an endogenous interest-rate spread and affects equilibrium allocations and inflation by altering the Ramsey planner’s sequence of implementability and sticky-price constraints. Qualitatively, the trade-off confronting a planner in sticky-price models shown in recent literature, between using inflation surprise and labor-income tax, is eliminated by the liquid bond channel. We find that the more sticky prices become, the more the optimal fiscal–monetary policy stabilizes prices and also creates less distortionary and less volatile income taxes by taxing the liquidity service of bonds. Quantitatively, we show that the additional tax instrument created by the bond liquidity channel can yield a sizable welfare gain from an economy without this channel.

We constructed a model where government bonds provide liquidity service, an idea that goes back to the work of Tobin, 1965 and Patinkin, 1965 and supported by the observation that US Treasury bills have a role in facilitating transactions. We showed in the paper that when a government bond plays a dual role of providing liquidity as well as a traditional function as a financial asset, it alters the Ramsey optimal fiscal and monetary policy equilibrium allocations. We found that in environments of increasing price stickiness inflation becomes less volatile and less persistent and labor income tax is less volatile. However, both the quantity of government debt and its return to the debt holder become more volatile and more persistent. Further, the labor income tax rate remains very persistent, reflecting a tax smoothing outcome. Also, the interest-rate spread is increasing with the degree of price stickiness, reflecting the increasing tax on bond liquidity. Thus, with increasing price stickiness the Ramsey optimal monetary policy is to stabilize inflation, foregoing the shock absorbing role of inflation in creating an ex-post state-contingent government debt. The corresponding optimal fiscal policy is to minimize labor income tax distortions, over time (tax smoothing) and across states (lower volatility). In return for the gain in low inflation volatility and low intertemporal income tax distortions, the optimal policy uses liquid government bonds as a means of shock absorption. We show that this result is robust across feasible parameterizations of bond liquidity and also in the face of government spending shocks and technology shocks. Quantitatively, we show that the additional tax instrument created by the bond liquidity channel can yield a sizable welfare gain from an economy without this channel.