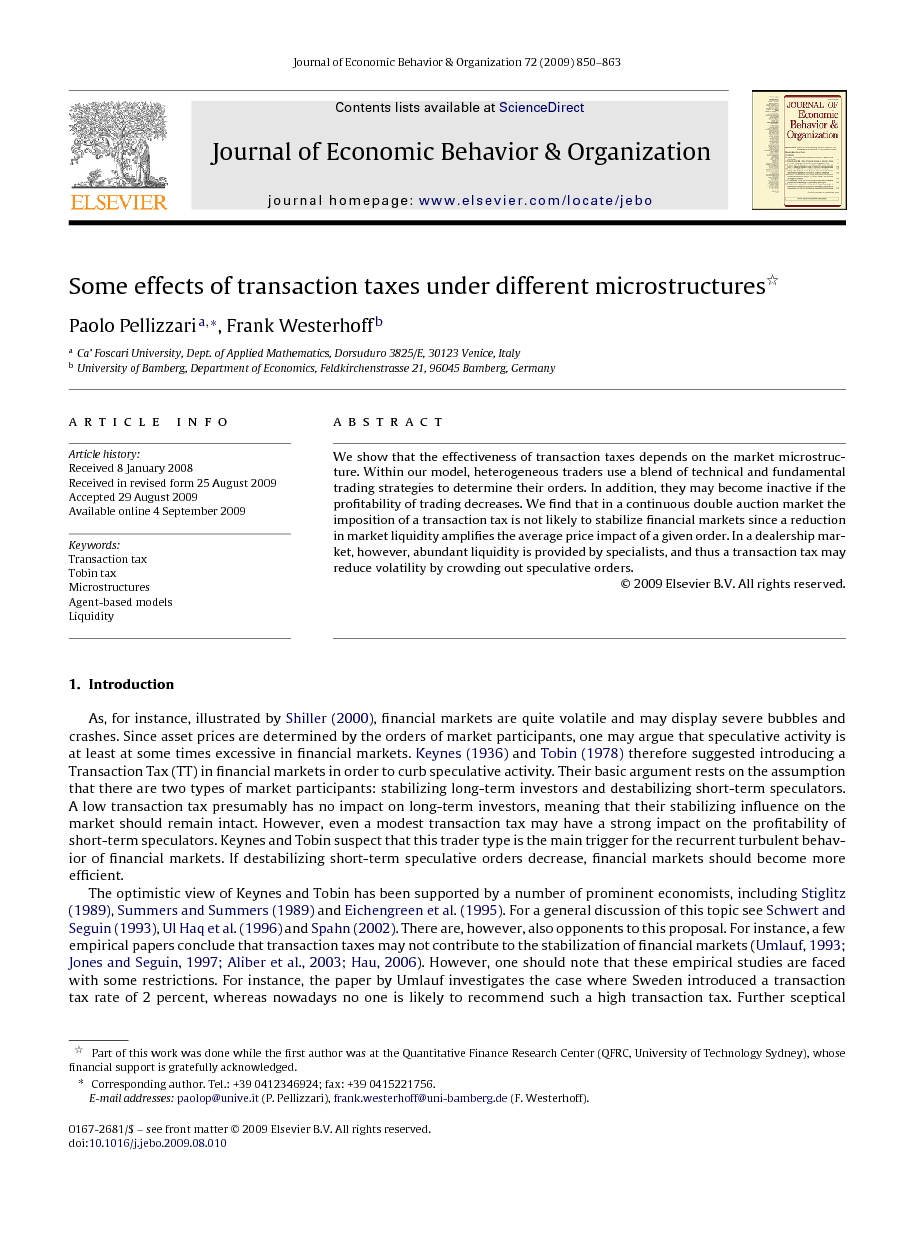 We show that the effectiveness of transaction taxes depends on the market microstructure. Within our model, heterogeneous traders use a blend of technical and fundamental trading strategies to determine their orders. In addition, they may become inactive if the profitability of trading decreases. We find that in a continuous double auction market the imposition of a transaction tax is not likely to stabilize financial markets since a reduction in market liquidity amplifies the average price impact of a given order. In a dealership market, however, abundant liquidity is provided by specialists, and thus a transaction tax may reduce volatility by crowding out speculative orders.

In this paper, we explore the effectiveness of transaction taxes in different institutional market microstructure settings. Within our model, asset prices are driven by the orders of market participants. These agents rely on technical, fundamental and random trading strategies to determine their investment positions. However, they are not forced to trade. Their decision to be active or inactive depends on the past profitability of the agents' trades. Should a trader encounter losses, he or she may decide to stop trading (and vice versa). In one of our scenarios, the orders of market participants enter a continuous double auction market. In another scenario, the orders of market participants are filled by a specialist. Both settings are generally able to mimic some stylized facts of financial markets, and thus allow a comparison of the impact of transaction taxes on the market dynamics. Our key findings can be summarized as follows: • In a continuous double auction market, the imposition of a transaction tax presumably has little stabilizing impact on the market dynamics. We observe that traders retreat from the market if a levy has to be paid, leading to a decrease in volume. However, liquidity also decreases so that, on average, a given order obtains a larger price impact. This, in turn, counters or even eliminates the otherwise stabilizing effect of the transaction tax. The distortion in the market remains unaltered. • Our model predicts that in a dealership market, a transaction tax has the power to stabilize market dynamics. Also in this environment, traders retreat from the market, and volume declines. However, since liquidity is exogenously provided by a specialist, the price impact of a given order remains constant, and thus volatility declines significantly. Again, the distortion is not significantly reduced. Concluding, we find that market microstructure details matter for the effectiveness of transaction taxes. We hope that our paper resolves some of the confusion frequently observed in the debate on the outcomes of transaction taxes.