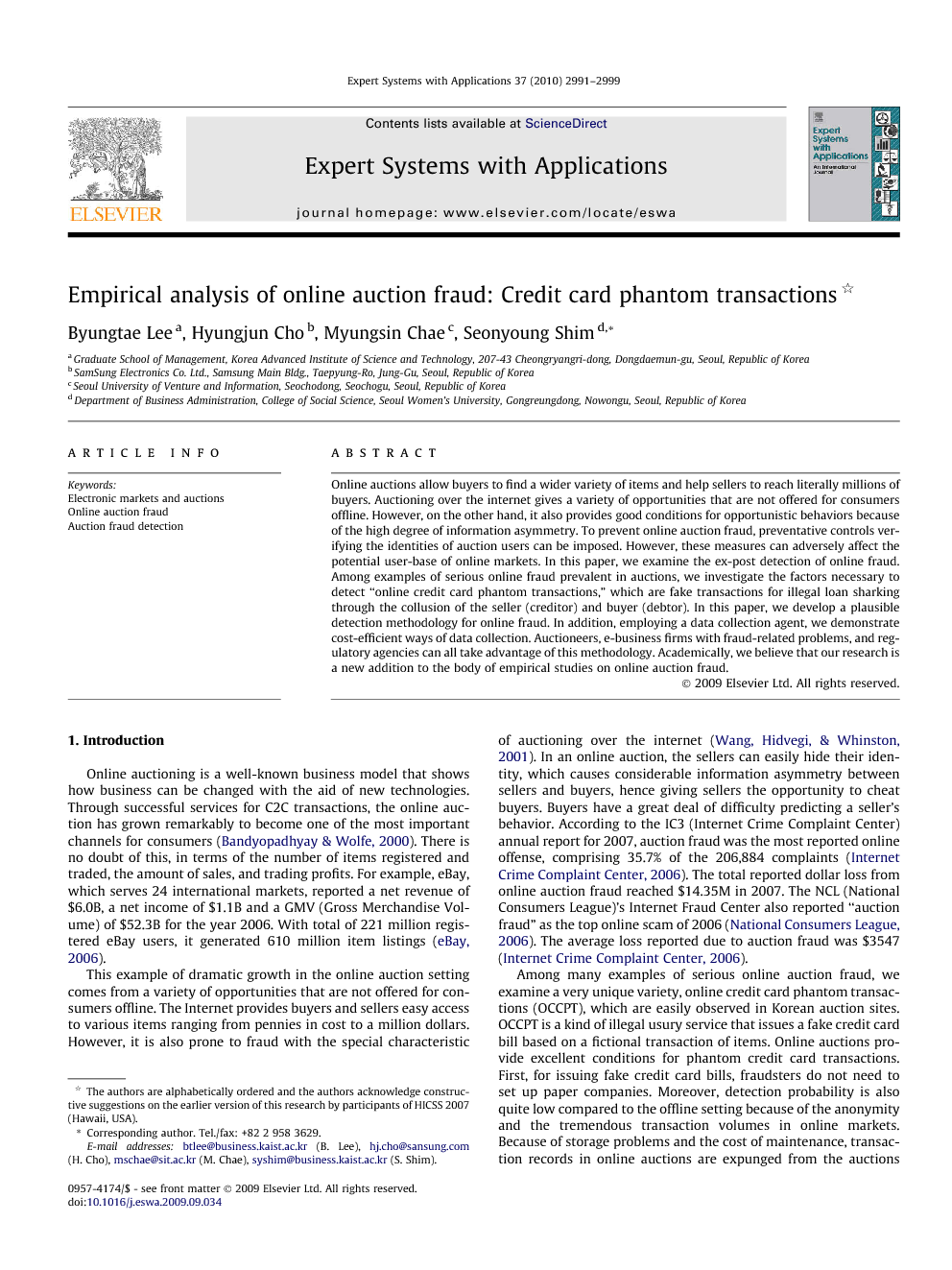 Online auctions allow buyers to find a wider variety of items and help sellers to reach literally millions of buyers. Auctioning over the internet gives a variety of opportunities that are not offered for consumers offline. However, on the other hand, it also provides good conditions for opportunistic behaviors because of the high degree of information asymmetry. To prevent online auction fraud, preventative controls verifying the identities of auction users can be imposed. However, these measures can adversely affect the potential user-base of online markets. In this paper, we examine the ex-post detection of online fraud. Among examples of serious online fraud prevalent in auctions, we investigate the factors necessary to detect “online credit card phantom transactions,” which are fake transactions for illegal loan sharking through the collusion of the seller (creditor) and buyer (debtor). In this paper, we develop a plausible detection methodology for online fraud. In addition, employing a data collection agent, we demonstrate cost-efficient ways of data collection. Auctioneers, e-business firms with fraud-related problems, and regulatory agencies can all take advantage of this methodology. Academically, we believe that our research is a new addition to the body of empirical studies on online auction fraud.

Online auctioning is a well-known business model that shows how business can be changed with the aid of new technologies. Through successful services for C2C transactions, the online auction has grown remarkably to become one of the most important channels for consumers (Bandyopadhyay & Wolfe, 2000). There is no doubt of this, in terms of the number of items registered and traded, the amount of sales, and trading profits. For example, eBay, which serves 24 international markets, reported a net revenue of $6.0B, a net income of $1.1B and a GMV (Gross Merchandise Volume) of $52.3B for the year 2006. With total of 221 million registered eBay users, it generated 610 million item listings (eBay, 2006). This example of dramatic growth in the online auction setting comes from a variety of opportunities that are not offered for consumers offline. The Internet provides buyers and sellers easy access to various items ranging from pennies in cost to a million dollars. However, it is also prone to fraud with the special characteristic of auctioning over the internet (Wang, Hidvegi, & Whinston, 2001). In an online auction, the sellers can easily hide their identity, which causes considerable information asymmetry between sellers and buyers, hence giving sellers the opportunity to cheat buyers. Buyers have a great deal of difficulty predicting a seller’s behavior. According to the IC3 (Internet Crime Complaint Center) annual report for 2007, auction fraud was the most reported online offense, comprising 35.7% of the 206,884 complaints (Internet Crime Complaint Center, 2006). The total reported dollar loss from online auction fraud reached $14.35M in 2007. The NCL (National Consumers League)’s Internet Fraud Center also reported “auction fraud” as the top online scam of 2006 (National Consumers League, 2006). The average loss reported due to auction fraud was $3547 (Internet Crime Complaint Center, 2006). Among many examples of serious online auction fraud, we examine a very unique variety, online credit card phantom transactions (OCCPT), which are easily observed in Korean auction sites. OCCPT is a kind of illegal usury service that issues a fake credit card bill based on a fictional transaction of items. Online auctions provide excellent conditions for phantom credit card transactions. First, for issuing fake credit card bills, fraudsters do not need to set up paper companies. Moreover, detection probability is also quite low compared to the offline setting because of the anonymity and the tremendous transaction volumes in online markets. Because of storage problems and the cost of maintenance, transaction records in online auctions are expunged from the auctions after a set number of days. For example, eBay-US deletes transaction records every 30 days (Albert, 2002). OCCPT has become prevalent in Korean auction sites and seriously damaged the reputation of auction sites. It is reported that in the largest Korean online auction site (www.ebay.co.kr), the proportion of OCCPT once reached 25% of total transactions. Due to the prevalence of OCCPT, users perceived that the auctions in eBay-Korea were not safe, which was directly reflected in the evaluations in stock markets. The revenue and stock price of the auction site have rapidly dropped.1 For the prevention of OCCPT, online auctioneers have introduced policies such as monitoring systems and seller and buyer credit evaluation systems. These strategies had an effect on the removal of OCCPT to some extent. However, with some loopholes in these strategies, OCCPT still survives, especially in the less known online auctions, which operate without prevention measures due to the high cost of investment in such measures. It is also noteworthy that many preventative controls can reduce the attractiveness of online transactions by increasing the psychological burden for auction users who have great concern for their privacy; e.g., for real name authentication, users’ private information could be exposed. One solution to this problem has been the introduction of the digital certificate as verification of identity. Once users are issued a digital certificate on their PC, their transactions are limited to that PC, hence reducing users’ freedom to perform transactions. For this reason, although it seems to contribute to the prevention of OCCPT in the short term, restrictive preventative controls may reduce the online user-base in the long run. Therefore, in order to protect normal users and promote online transactions, in addition to the careful imposition of preventative controls, development of efficient deterrent controls for the detection and punishment of fraud is required. However, a serious problem in the deterrence of this kind of crime is that the low detection rate makes it more difficult to utilize statistical analysis or artificial intelligence based on previously detected cases (Johnson, Grazioli, Jamal, & Berryman, 2001). Even strict punishment can be ineffective for the deterrence of crime if the detection probability is quite low, as the economics of crime literature shows (DePaulo and Pfeifer, 1986 and Johnson et al., 2001). Thus, the improvement of detection methods is very important for the control of online fraud, despite difficulties caused by anonymity and the extremely high volume of transactions in online markets. Bajari and Hortaçsu’s study (2004) shows the importance of seller reputation in resolving the problems of information asymmetry in online markets. They suggest an evaluation system of sellers’ credit in both prevention and detection of online fraud. However, with the exception of the studies on the shilling (Kauffman and Wood, 2001 and Kauffman and Wood, 2003), there are few empirical studies on online auction fraud detection. Moreover, to the best of our knowledge, there is no study on OCCPT. Therefore, in this paper, we empirically investigate the factors for identifying OCCPT. The paper is organized as follows. In Section 2, we examine the characteristics of online auction fraud, including OCCPT, and illuminate the importance of online fraud detection from a criminal sociology perspective. We also examine the theoretical background for our OCCPT detection model from MIS studies on the behavior characteristics of online auction participants. In Section 3, we provide the research model, hypotheses and methodology of data collection. Analysis is provided in Section 4. In Section 5, we summarize the analysis results and test our hypotheses. Finally, the implications and limitations of this research are discussed.

In this research, we identified some key factors to detect online credit card phantom transactions based on behavior studies of buyers and sellers in online auctions. Using a web-based data collection agent, we collected bidding records on lap-top computers selling at over $1000 over the course of three months, and identified three factors to detect OCCPT. First, in cases of OCCPT, the starting bid is higher than in normal transactions. Generally, studies on online auctions indicate that the reason for a low starting bid is related to the online auction’s cost (service fee) structure. However, our empirical investigation shows that this expectation can be ignored in cases of OCCPT. Second, an auction for OCCPT is shorter than normal auctions. With both normal and shilling cases, auctions take longer because the goal is to secure a higher closing price. However, we showed that for OCCPT, auctions are very short because the goal is to close the auction as soon as possible, which is a different result from those in other related research. Finally, we identified seller credit as a significant detection factor, which means that low seller credit is an important signal enabling buyers to avoid auction fraud, including OCCPT. Many studies on online fraud insist that seller credit is an important factor for fraud detection. Although seller credit is not a unique factor for detecting OCCPT, and it is a common factor for many types of online fraud, we discovered that it is still one of the most important factors for detection of OCCPT. For this reason, a seller credit evaluation system is usually adopted by many online auction sites for prevention and detection of various types of auction fraud. According to the survey on online auctions by NCL (National Consumers League & Research on Online Auction Fraud, 2000), 87% of buyers replied that if seller credit information was provided on the auction site, they always or usually checked it. From our sample, OCCPT have on average 73% higher starting bids, 98% shorter auctions, and 96% lower levels of seller credit than those of normal transactions for lap-top computers. The two variables, which were rejected in the hypotheses testing, were also significant in the F-test between normal and OCCPT groups. We can conclude that there are significant differences in bid count and bid increment between the two groups. Hence, our results imply that we should not conjecture whether online fraud is present or not by observing simply one or two factors. The question should be considered in the overall context by investigating various characteristics of sellers, items, and bids.