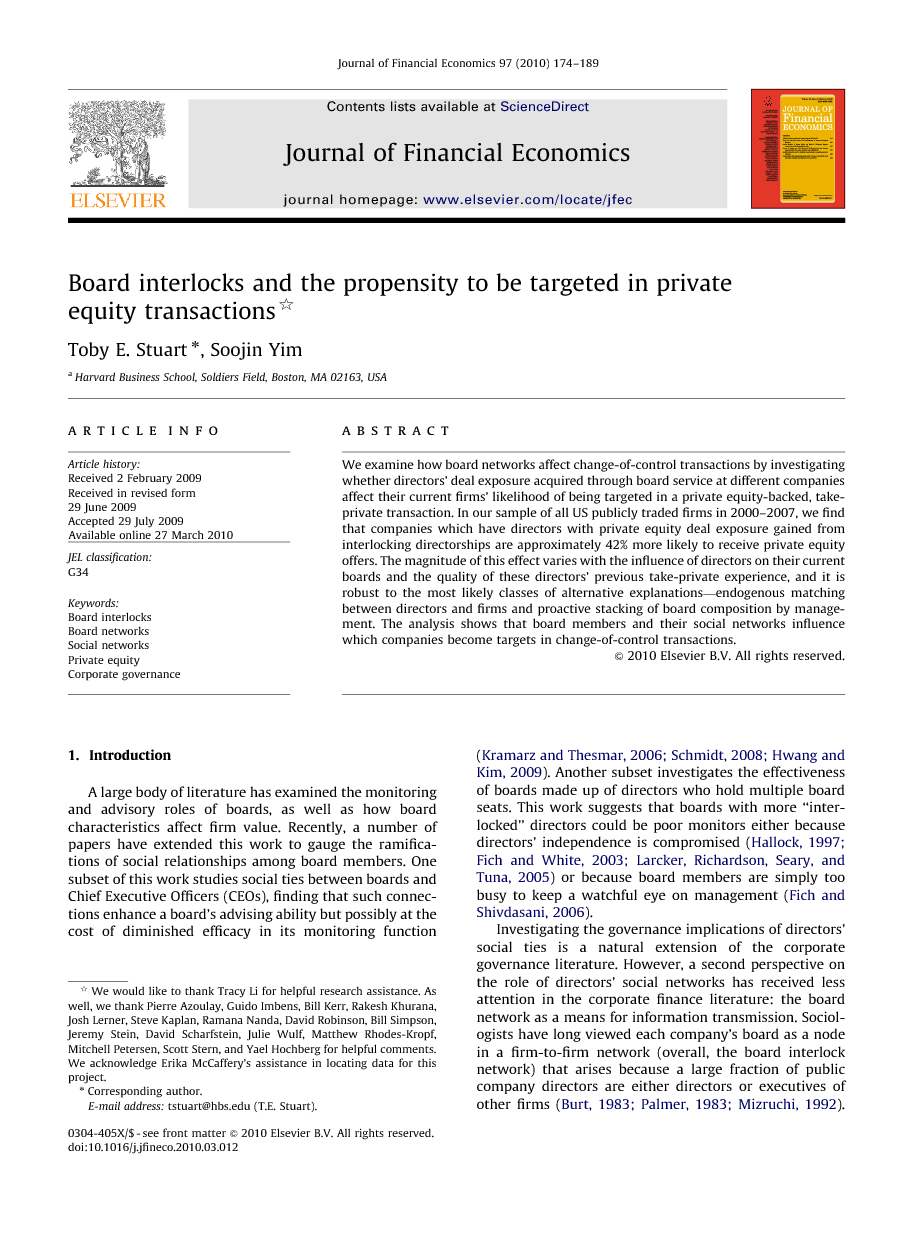 We examine how board networks affect change-of-control transactions by investigating whether directors’ deal exposure acquired through board service at different companies affect their current firms’ likelihood of being targeted in a private equity-backed, take-private transaction. In our sample of all US publicly traded firms in 2000–2007, we find that companies which have directors with private equity deal exposure gained from interlocking directorships are approximately 42% more likely to receive private equity offers. The magnitude of this effect varies with the influence of directors on their current boards and the quality of these directors’ previous take-private experience, and it is robust to the most likely classes of alternative explanations—endogenous matching between directors and firms and proactive stacking of board composition by management. The analysis shows that board members and their social networks influence which companies become targets in change-of-control transactions.

The evidence we present shows that board characteristics, including the intercompany network formed by directors who serve on more than one public company board, play an important role in private equity deal generation. We find that still-public firms with board interlocks are much more likely to become targets in PE-backed take-private transactions; that there is an additional, economically significant effect of having interlocked directors who specifically have PE experience through board service at a different company; and that the nature of the individual director's past PE experience and relative influence on a still-public company's board contours the effect of having a PE Interlocked director. We offer a set of explanations for these findings, including that PE-experienced directors are more likely to have ties with key players in the private equity ecosystem, are more likely to be viewed as experts by other members of the board, are more likely to be known by PE firms searching for deals, and could be more likely to advise management to proceed with a deal. All of these factors could influence whether preliminary discussions between PE firms and potential targets are initiated and whether they ultimately rise to the level of a formal offer. We consider two primary alternative explanations: board stacking and director-firm matching on unobserved attributes that correlate with the take-private hazard, which might generate a positive but spurious relation between a firm with a PE Interlocked director and its likelihood of becoming a PE target. Through many supplemental analyses, we find that the PE Interlock effect is robust to these two alternatives. Finally, we believe that the boardroom network is a promising venue in which to further study the influence of social networks on financial market outcomes. First, as our descriptive statistics reveal, this is a relatively dense network. The vast majority of domestic, public companies now have one or more director interlocks with other public firms. Second, board members are central agents in an array of important decisions, including the selection of CEOs, divestitures, M&As, executive compensation, and the adoption of corporate governance practices. At one level, our findings reinforce the idea that a small number of individuals can wield significant influence in company-wide outcomes. At another level, because these types of decision are taken by the entire board, not by solitary directors, our findings ultimately suggest that individual directors are both swayed by and influence others in the network in which they are embedded. Further research into the sources and conduits of boardroom influence can yield important insights that enhance traditional understandings of the drivers of corporate financial behavior.