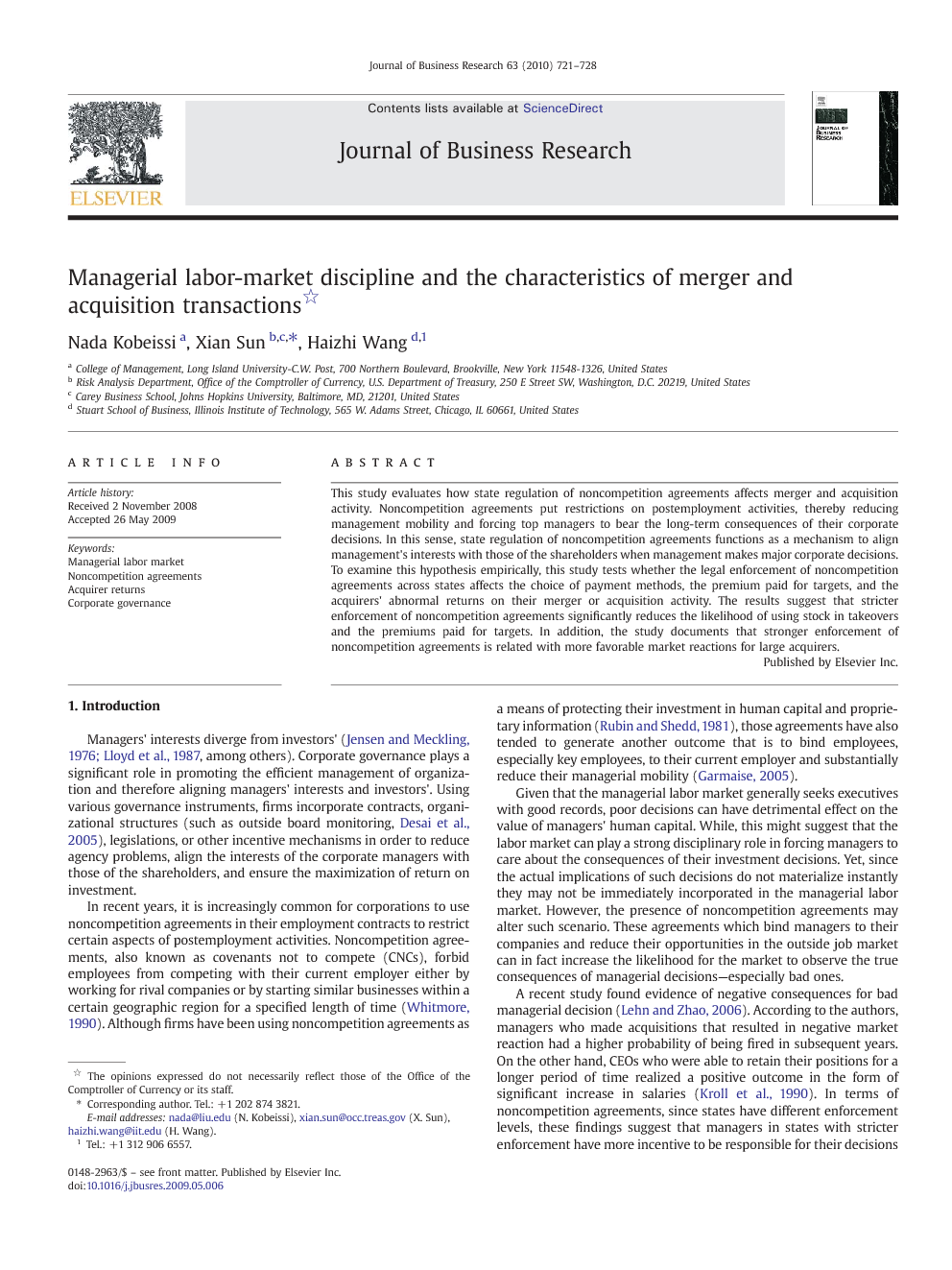 Managers' interests diverge from investors' (Jensen and Meckling, 1976 and Lloyd et al., 1987, among others). Corporate governance plays a significant role in promoting the efficient management of organization and therefore aligning managers' interests and investors'. Using various governance instruments, firms incorporate contracts, organizational structures (such as outside board monitoring, Desai et al., 2005), legislations, or other incentive mechanisms in order to reduce agency problems, align the interests of the corporate managers with those of the shareholders, and ensure the maximization of return on investment. In recent years, it is increasingly common for corporations to use noncompetition agreements in their employment contracts to restrict certain aspects of postemployment activities. Noncompetition agreements, also known as covenants not to compete (CNCs), forbid employees from competing with their current employer either by working for rival companies or by starting similar businesses within a certain geographic region for a specified length of time (Whitmore, 1990). Although firms have been using noncompetition agreements as a means of protecting their investment in human capital and proprietary information (Rubin and Shedd, 1981), those agreements have also tended to generate another outcome that is to bind employees, especially key employees, to their current employer and substantially reduce their managerial mobility (Garmaise, 2005). Given that the managerial labor market generally seeks executives with good records, poor decisions can have detrimental effect on the value of managers' human capital. While, this might suggest that the labor market can play a strong disciplinary role in forcing managers to care about the consequences of their investment decisions. Yet, since the actual implications of such decisions do not materialize instantly they may not be immediately incorporated in the managerial labor market. However, the presence of noncompetition agreements may alter such scenario. These agreements which bind managers to their companies and reduce their opportunities in the outside job market can in fact increase the likelihood for the market to observe the true consequences of managerial decisions—especially bad ones. A recent study found evidence of negative consequences for bad managerial decision (Lehn and Zhao, 2006). According to the authors, managers who made acquisitions that resulted in negative market reaction had a higher probability of being fired in subsequent years. On the other hand, CEOs who were able to retain their positions for a longer period of time realized a positive outcome in the form of significant increase in salaries (Kroll et al., 1990). In terms of noncompetition agreements, since states have different enforcement levels, these findings suggest that managers in states with stricter enforcement have more incentive to be responsible for their decisions for a longer period of time. In the context of corporate takeovers, they are more likely to make value-enhancing acquisitions when they are forced to bear the long-term consequences of their decisions. Therefore, since shareholders often use legal/regulatory system as a mechanism to resolve agency problem (Jensen, 1993), this paper argues that the strict enforcement of noncompetition agreements is a governance mechanism that shareholders can use to resolve agency problem. In essence, the resulting effect of noncompetition agreements in reducing managers' opportunities in the external labor market makes them a potent mechanism to align the interests of management with those of shareholders. The variation in legal enforcement of noncompetition agreements in the U.S. provides a natural setting to test a series of decisions related to corporate finance activities. Focusing on merger and acquisition activities, the study will specifically analyze whether the level of enforcement will have an impact on management's choice of medium of exchange, the premium paid for targets, and the stock market's reaction to the announcements of merger and acquisition activities. The study will proceed as follows. Section 2 provides a brief literature review. Section 3 introduces the data collection and sample construction. Section 4 presents the results. Section 5 discusses the limitations and implications for managers and future research.

Managerial labor-market concerns play a strong disciplinary role in managers' investment decisions (Fama, 1980). However, very little empirical research has focused on whether and to what extent such concerns affect corporate strategic decisions and performance. This lack of research is partly due to the difficulty in measuring the disciplinary effects of the managerial labor market. This study aims to fill the void by examining whether variations in the level of legal enforcement of noncompetition agreements—a widely used mechanism to limit the postemployment activities of (key) employees—can affect management decisions regarding their choice of payment for acquisitions, the premium paid for targets, as well as the stock market reaction to announcements of merger or acquisition activity. It is important to note that since the strict enforcement of noncompetition agreements significantly reduces managers' opportunities in the external labor market, these agreements then become potent tools for aligning management with shareholder interests. Using a sample of merger and acquisition transactions by public U.S. acquirers, the study finds that legal enforcement of noncompetition agreements increases the likelihood of cash payment, reduces the premiums paid for the targets, and results in less unfavorable announcement effect for large acquirers. The study also reveals that in states with stronger legal enforcement of noncompetition agreements, managers in small acquiring firms tend to pay higher premiums for targets and in turn, such transactions receive unfavorable market reactions upon the announcement. These findings suggest a tradeoff between the benefits gained from completing a merger or acquisition deal and the penalty experienced as a result of making bad strategic decisions. They also underscore the limitation for one corporate governance mechanism to be able to address the misalignment problems between managers and shareholders. In sum, the results suggest the following important implications: First they support the idea that managerial labor market could discipline management because long-term career concerns are part of the corporate governance system (Fama, 1980). Second, they reveal that transactions in the sample generated an average loss of $128.2 million to shareholders during a short period of time (3 days window). This is a significant amount; thus any mechanisms that could mitigate even a portion of such loss will have economic significance. Last, the findings in this paper can be valuable to policy makers with respect to regulations and legal system. Although the initial intention for noncompetition agreements is to protect firms' investments in human capital, the results reveal that enforcement of such agreements also affects managerial incentives when making major corporate decisions. The study however, does have some limitations. The confidential nature of individual contracts restricts access to the actual agreements signed by employees. Hence, the study essentially uses an index to capture the strength of state enforcement of noncompetition agreements. While this limitation may lower the explanatory power of the phenomenon, however the above restriction also applies to investors, who also form their expectations by using the strength of the state regulation as a proxy. Moreover, because this study treats the enforceability index as exogenous to the model specification, the estimations are likely to be unbiased, hence avoid the problem of using contract specific measures which tend to be endogenous. Studies that focus on specific CEO tenures (Walters et al., 2007) and/or contracts would have to deal with more endogenous questions. Finally, although the negotiation between an acquirer and a target is a dynamic process, this study only looks at these deals from an acquiring firm's perspective. Therefore, further research taking the target company perspective should be valuable to have a full understanding of the disciplinary effect of the labor market on managerial decisions.