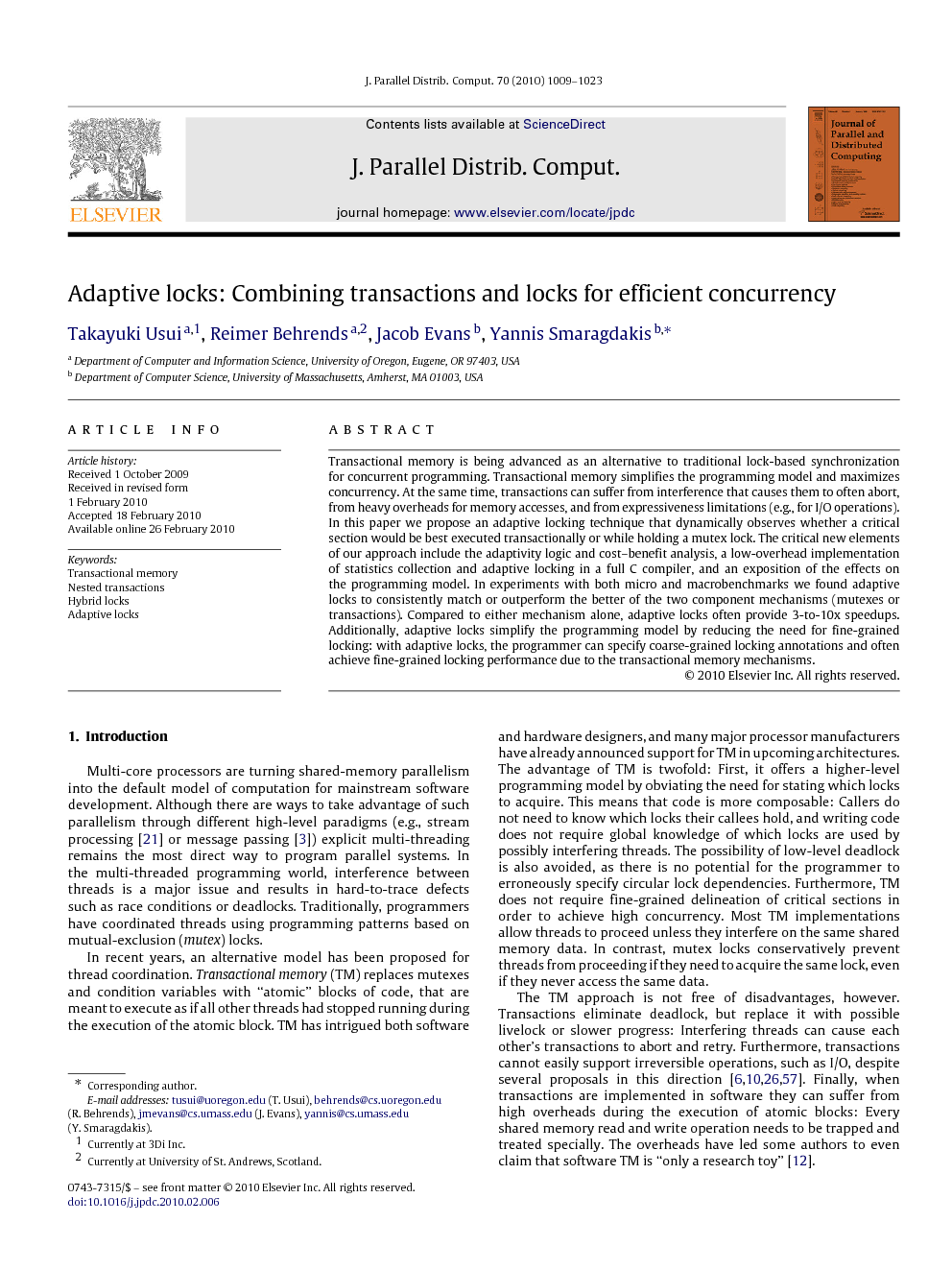 Transactional memory is being advanced as an alternative to traditional lock-based synchronization for concurrent programming. Transactional memory simplifies the programming model and maximizes concurrency. At the same time, transactions can suffer from interference that causes them to often abort, from heavy overheads for memory accesses, and from expressiveness limitations (e.g., for I/O operations). In this paper we propose an adaptive locking technique that dynamically observes whether a critical section would be best executed transactionally or while holding a mutex lock. The critical new elements of our approach include the adaptivity logic and cost–benefit analysis, a low-overhead implementation of statistics collection and adaptive locking in a full C compiler, and an exposition of the effects on the programming model. In experiments with both micro and macrobenchmarks we found adaptive locks to consistently match or outperform the better of the two component mechanisms (mutexes or transactions). Compared to either mechanism alone, adaptive locks often provide 3-to-10x speedups. Additionally, adaptive locks simplify the programming model by reducing the need for fine-grained locking: with adaptive locks, the programmer can specify coarse-grained locking annotations and often achieve fine-grained locking performance due to the transactional memory mechanisms.

We presented the idea of adaptive locks as a concurrency control construct for multi-threaded programming. A major contribution of our work is in identifying the statistics needed for an effective cost–benefit adaptivity analysis and in developing mechanisms for maintaining such statistics highly efficiently. Overall, we believe that our work establishes adaptive locks as an excellent candidate for inclusion in industrial-strength systems. The efficiency of our adaptivity approach suggests several other future applications. One promising possibility is adaptive switching between a pessimistic and an optimistic TM implementation—i.e., rolling back on deadlock vs. rolling back on actual contention. Although both pessimistic and optimistic TM approaches perform best when there is no actual contention on the data, pessimistic TM approaches reduce the probability of roll-back at the expense of some thread waiting for locks to become available. Adaptivity can help determine when this trade-off is profitable. Another potential application of adaptivity is in changing the locking granularity of a TM system: an adaptive TM can start with associating lock words (used internally by the TM implementation) at a coarse granularity. Then, as nominal contention is encountered, the system can switch to a finer granularity, and possibly back, if the overhead of fine-grained locking appears heavy and unwarranted. Such granularity switching is applicable to practically all TM systems we are aware of, both pessimistic and optimistic. Our adaptive locks can be seen as an extreme case of both granularity switching and pessimistic–optimistic switching at the same time. Generally, we believe that the idea of adaptive concurrency control holds significant promise and that adaptive locks, as analyzed in this paper, are an excellent representative of the possibilities.