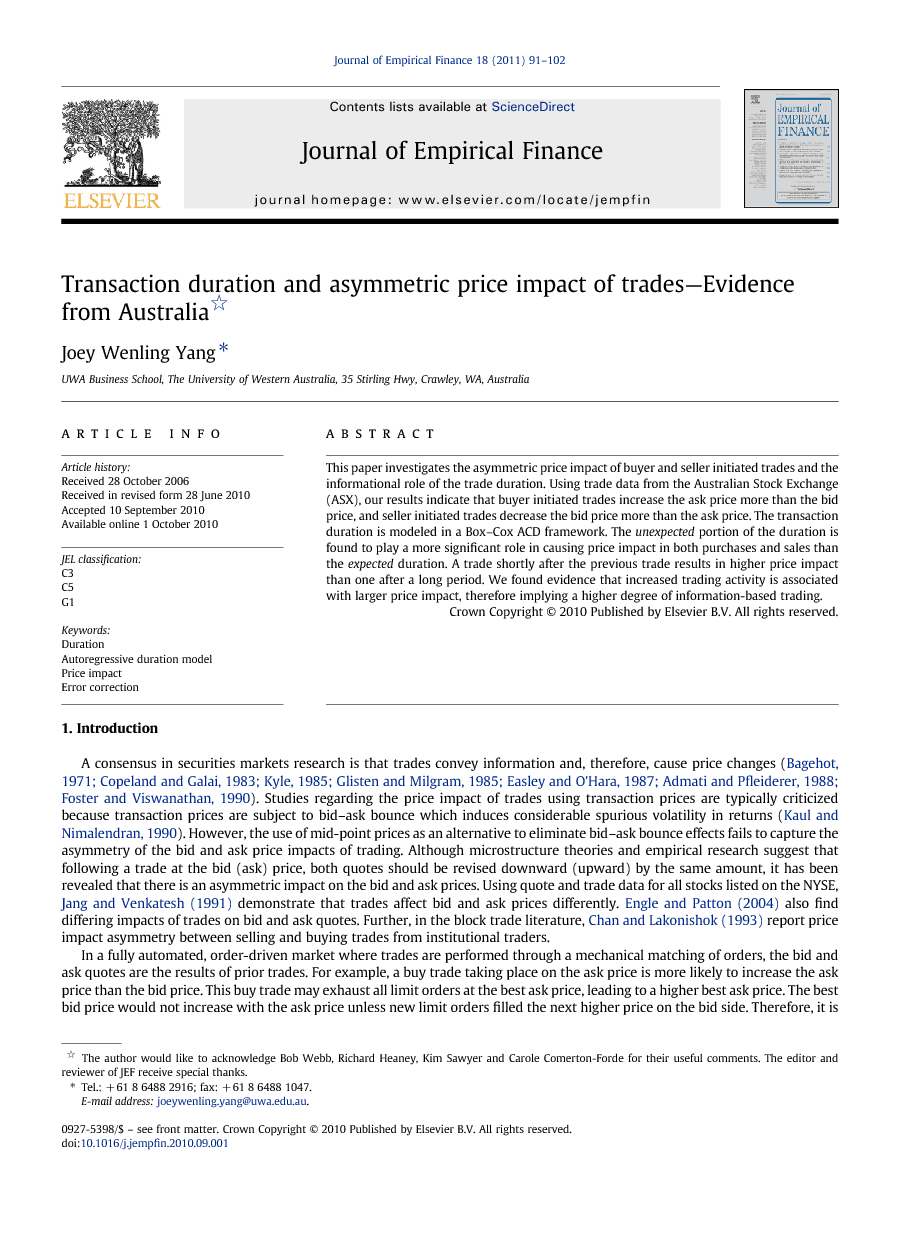 This paper investigates the asymmetric price impact of buyer and seller initiated trades and the informational role of the trade duration. Using trade data from the Australian Stock Exchange (ASX), our results indicate that buyer initiated trades increase the ask price more than the bid price, and seller initiated trades decrease the bid price more than the ask price. The transaction duration is modeled in a Box–Cox ACD framework. The unexpected portion of the duration is found to play a more significant role in causing price impact in both purchases and sales than the expected duration. A trade shortly after the previous trade results in higher price impact than one after a long period. We found evidence that increased trading activity is associated with larger price impact, therefore implying a higher degree of information-based trading.

A consensus in securities markets research is that trades convey information and, therefore, cause price changes (Bagehot, 1971, Copeland & Galai, 1983, Kyle, 1985, Glisten & Milgram, 1985, Easley & O'Hara, 1987, Admati & Pfleiderer, 1988 and Foster & Viswanathan, 1990). Studies regarding the price impact of trades using transaction prices are typically criticized because transaction prices are subject to bid–ask bounce which induces considerable spurious volatility in returns (Kaul and Nimalendran, 1990). However, the use of mid-point prices as an alternative to eliminate bid–ask bounce effects fails to capture the asymmetry of the bid and ask price impacts of trading. Although microstructure theories and empirical research suggest that following a trade at the bid (ask) price, both quotes should be revised downward (upward) by the same amount, it has been revealed that there is an asymmetric impact on the bid and ask prices. Using quote and trade data for all stocks listed on the NYSE, Jang and Venkatesh (1991) demonstrate that trades affect bid and ask prices differently. Engle and Patton (2004) also find differing impacts of trades on bid and ask quotes. Further, in the block trade literature, Chan and Lakonishok (1993) report price impact asymmetry between selling and buying trades from institutional traders. In a fully automated, order-driven market where trades are performed through a mechanical matching of orders, the bid and ask quotes are the results of prior trades. For example, a buy trade taking place on the ask price is more likely to increase the ask price than the bid price. This buy trade may exhaust all limit orders at the best ask price, leading to a higher best ask price. The best bid price would not increase with the ask price unless new limit orders filled the next higher price on the bid side. Therefore, it is conjectured that the impact of trades is asymmetric for bid and ask prices. The first objective of this paper is to investigate the differing impact of trades on the bid and ask quotes within an order-driven context, the Australian Stock Exchange (ASX). One salient aspect of continuous trading in stock markets is that trades occur at irregular time intervals. This leads to the second objective of this paper, which is to extend the current literature regarding the informational role of trading activity measured in the form of transaction duration (or the time between two consecutive trades). Early theoretical research allocated an informational role for transaction duration. Diamond & Verrecchia, 1987 and Easley & O'Hara, 1992 suggest that the time between trades provides information about the type of information contained in a trade.1 The implication of Admati and Pfleiderer's (1988) theoretical model is that informed traders choose to trade in a “thick” market to minimize the market impact of their trades thereby maximizing the value of their information advantage. As a result, a cluster of trading is observed at various stages of trading when informed traders compete with themselves for liquidity. High trading activity as measured by high trading rates (or short durations) is an indication of the presence of informed trading. This proposition is confirmed in empirical studies. Jones et al. (1994) report that the number of trades drives prices more so than actual trade size.2 In an extension of Hasbrouck, 1991 and Dufour & Engle, 2000, using transaction data, confirm that the price impact is especially large due to increased trading activity. With the recent development of the autoregressive conditional duration (ACD) framework, Engle and Russell (1998) decompose transaction durations into two components, the conditional (expected) duration and the unexpected duration. The expected component is the portion of transaction duration that is conditional on past durations, whereas the unexpected duration is the fraction of duration beyond that which could be predicted from past durations, and, as such, is the “white noise” term in the ACD model. According to Engle and Russell (1998), the unexpected duration is the more informative component. Engle and Lange (2001) also verify that the change in liquidity is attributed more to the unexpected duration than the conditional duration. When a certain information event is detected by informed traders, they tend to trade faster than would be expected from their previous trading history causing price movements. The results of this paper provide evidence of a decrease in the ask price and an increase in the bid price after a wide bid/ask spread is observed, supporting previous literature on the mean reversion characteristic of stock prices. The bid and ask prices are both increased by buyer initiated trades, and both decreased by seller initiated trades. An asymmetry in the magnitude of price impact from buyer initiated and seller initiated trades is also observed, where buyer initiated trades increase the ask price more so than the bid price, and seller initiated trades decrease the bid price more than the ask price. Transaction duration as a measure of trading activity is modeled in a Box–Cox transformed autoregressive conditional duration framework. The unexpected portion of transaction duration is found to play a more significant role in driving quotes than the expected durations. Estimated duration coefficients suggest that a purchase (sale) shortly after the previous trade causes the ask (bid) price to rise (fall) more than a purchase (sale) after a longer period. This is consistent with the theory that intensive trading activity impounds information, and with findings reported in Dufour and Engle (2000) where higher trading activity is associated with a higher level of information-based trading and, therefore, with larger price impacts. Periods of the most intensive trading coincide with periods in which there are an increased number of informed traders.

The present paper investigates the asymmetric impact of trades and the information content of transaction duration in an ACD-VECM modeling framework applied to a typical order-driven market, the Australian Stock Exchange (ASX). As a proxy for the bid–ask spread, the error-correction term is statistically significant thereby confirming the mean reversion of the bid and ask prices. Estimation results indicate that buyer initiated trades increase ask prices more than bid prices, and seller initiated trades decrease the bid price more than the ask price. This provides evidence to support the proposition of asymmetric price impacts reported in previous theoretical studies. In contrast to Chan and Lakonishok (1993), purchases are found to have a smaller price impact than sales in the present study. The informational role of transaction duration is then examined. Intensive trading activity is reflected in the short duration (in both purchases and sales) and is associated with a large price impact. A trade occurring shortly after the previous trade causes price to move more than a trade after a prolonged waiting period. Since more informed traders in the market will cause the price adjustment to trade-related information faster, our finding of large price impact in periods of frequent trading is an indication of informed trading. The increased trading activity as reflected in short duration is, therefore, associated with larger price impact, and implies a higher degree of information-based trading. Finally, by employing a model of autoregressive conditional duration (ACD), we are able to decompose the duration into two components, the expected (conditional) duration and the unexpected duration. It is found that a larger price impact is caused by the unexpected duration. This finding provides strong empirical evidence to the theory in relation to informed trading and prices. It is also consistent with Engle and Lange (2001) who document that the change in intra-day liquidity is attributed more to the unexpected duration than the conditional duration.