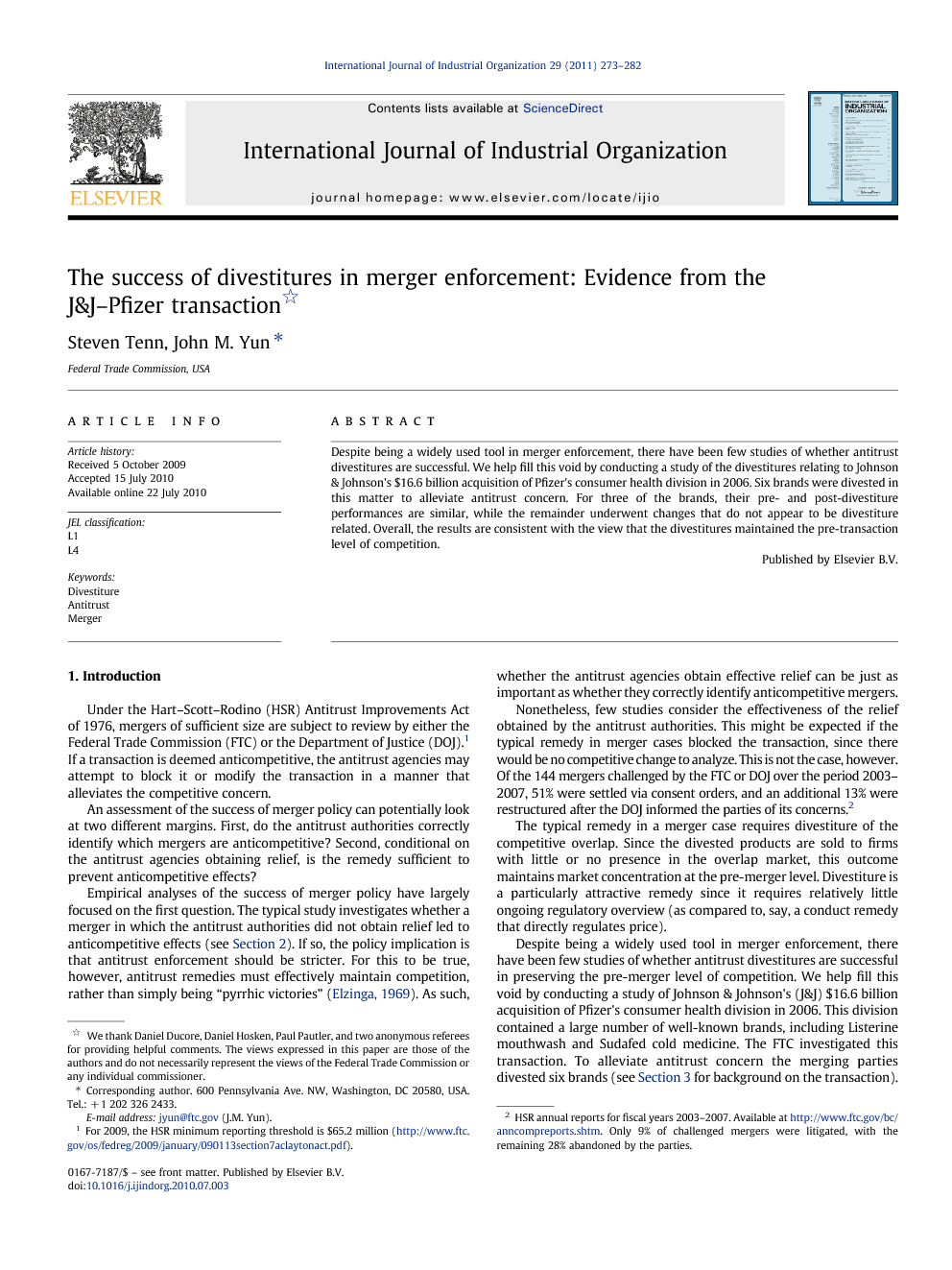 Despite being a widely used tool in merger enforcement, there have been few studies of whether antitrust divestitures are successful. We help fill this void by conducting a study of the divestitures relating to Johnson & Johnson's $16.6 billion acquisition of Pfizer's consumer health division in 2006. Six brands were divested in this matter to alleviate antitrust concern. For three of the brands, their pre- and post-divestiture performances are similar, while the remainder underwent changes that do not appear to be divestiture related. Overall, the results are consistent with the view that the divestitures maintained the pre-transaction level of competition

Under the Hart–Scott–Rodino (HSR) Antitrust Improvements Act of 1976, mergers of sufficient size are subject to review by either the Federal Trade Commission (FTC) or the Department of Justice (DOJ).1 If a transaction is deemed anticompetitive, the antitrust agencies may attempt to block it or modify the transaction in a manner that alleviates the competitive concern. An assessment of the success of merger policy can potentially look at two different margins. First, do the antitrust authorities correctly identify which mergers are anticompetitive? Second, conditional on the antitrust agencies obtaining relief, is the remedy sufficient to prevent anticompetitive effects? Empirical analyses of the success of merger policy have largely focused on the first question. The typical study investigates whether a merger in which the antitrust authorities did not obtain relief led to anticompetitive effects (see Section 2). If so, the policy implication is that antitrust enforcement should be stricter. For this to be true, however, antitrust remedies must effectively maintain competition, rather than simply being “pyrrhic victories” (Elzinga, 1969). As such, whether the antitrust agencies obtain effective relief can be just as important as whether they correctly identify anticompetitive mergers. Nonetheless, few studies consider the effectiveness of the relief obtained by the antitrust authorities. This might be expected if the typical remedy in merger cases blocked the transaction, since there would be no competitive change to analyze. This is not the case, however. Of the 144 mergers challenged by the FTC or DOJ over the period 2003–2007, 51% were settled via consent orders, and an additional 13% were restructured after the DOJ informed the parties of its concerns.2 The typical remedy in a merger case requires divestiture of the competitive overlap. Since the divested products are sold to firms with little or no presence in the overlap market, this outcome maintains market concentration at the pre-merger level. Divestiture is a particularly attractive remedy since it requires relatively little ongoing regulatory overview (as compared to, say, a conduct remedy that directly regulates price). Despite being a widely used tool in merger enforcement, there have been few studies of whether antitrust divestitures are successful in preserving the pre-merger level of competition. We help fill this void by conducting a study of Johnson & Johnson's (J&J) $16.6 billion acquisition of Pfizer's consumer health division in 2006. This division contained a large number of well-known brands, including Listerine mouthwash and Sudafed cold medicine. The FTC investigated this transaction. To alleviate antitrust concern the merging parties divested six brands (see Section 3 for background on the transaction). The J&J–Pfizer divestitures are interesting cases to study for several reasons. First, they are examples of entire lines of business being divested. The FTC frequently follows this practice based, in part, on a FTC Bureau of Competition study that found such divestitures are more successful than divestitures of selected assets (FTC, 1999).3 In addition, an “up front” buyer was chosen prior to the FTC's acceptance of the proposed consent agreement for public comment. This practice has also become a frequent feature of antitrust divestitures (Baer and Redcay, 2001). The J&J–Pfizer transaction is a merger of two conglomerates. This setting commonly results in divestitures. The overlap that raises competitive concern often comprises a small portion of such deals, and the overlap products are often not the primary rationale for the transaction. Negotiating a divestiture with the antitrust authorities can be particularly efficient in such settings, since the time cost of delaying the entire transaction to litigate the merger can be high relative to the cost of divesting the (fairly minor) overlaps. This would appear to be the case in the J&J–Pfizer matter, where the divested brands comprise approximately 5% of the total value of the transaction. We analyze the impact of the J&J–Pfizer divestitures on several commonly employed sales metrics: dollar and volume sales, retail distribution, and price. A standard “before–after” estimator is used to measure each brand's post-divestiture change. In addition, we consider a “difference in difference” estimator that measures the post-divestiture change relative to a control group of other brands in the same product category. For three of the brands, their post-divestiture performance is similar to their pre-divestiture performance, while the remainder underwent changes that do not appear to be divestiture related. However, the results are sensitive to the maintained assumption regarding each brand's counterfactual performance had the divestitures not taken place. Moreover, significant heterogeneity across the control group leads to imprecise estimates. Overall, however, the results are consistent with the view that the divestitures maintained the pre-transaction level of competition. The layout of the paper is as follows. Section 2 reviews the previous literature. Section 3 provides additional background on the J&J–Pfizer transaction. The data is described in Section 4. Section 5 details the estimation methodology. Results are presented in Section 6 and Section 7 concludes.

This study analyzes the performance of the brands divested in the J&J–Pfizer transaction. The results from a standard “before–after” estimator show that the price of every divested brand fell post-divestiture (albeit only slightly in most cases). The divested brands performed as well or better in the post-divestiture period, or underwent major changes that do not appear to be divestiture related. These results reveal how each brand's performance changed post-divestiture. From a policy perspective, however, the key issue is how the divested brands performed relative to what would have occurred but-for the J&J–Pfizer transaction. We find that the results are quite sensitive to the maintained assumption regarding the divested brands' counterfactual performance. A consistent finding, however, is that “no change” lies within the range of estimates obtained under various modeling assumptions. We also consider a “difference in difference” estimator that measures the post-divestiture change relative to a control group. The results from this analysis do not reveal a statistically significant divestiture impact. However, substantial heterogeneity across the control group leads to imprecise estimates, diminishing the statistical power of this test. The results indicate that the post-divestiture performance of the divested brands is similar to their pre-divestiture performance. This suggests that the divestitures maintained the pre-transaction level of competition. However, uncertainty regarding the divested brands' counterfactual performance makes it impossible to determine whether the divestitures maintained the competitive environment that would have occurred in the absence of the J&J–Pfizer transaction. If one starts with the null that divestitures should have little impact when i) market concentration does not change; and ii) the acquirer has significant experience in related product categories, then our overall results are consistent with that hypothesis (i.e., we cannot reject the null). Admittedly, this is weaker than concluding that the divestitures had no effect. Our analysis highlights the inherent difficulty of conducting retrospective studies to determine the success of antitrust policy. While typically it is possible to determine what happened following a divestiture or a merger, it is far more difficult to conclude whether the observed change can reasonably be attributed to the analyzed event. We believe retrospective analyses of antitrust policy are useful, and more should be undertaken in the future. Nonetheless, it is important to recognize the limitations of such analyses and to consider carefully the sensitivity of the results to different modeling assumptions.