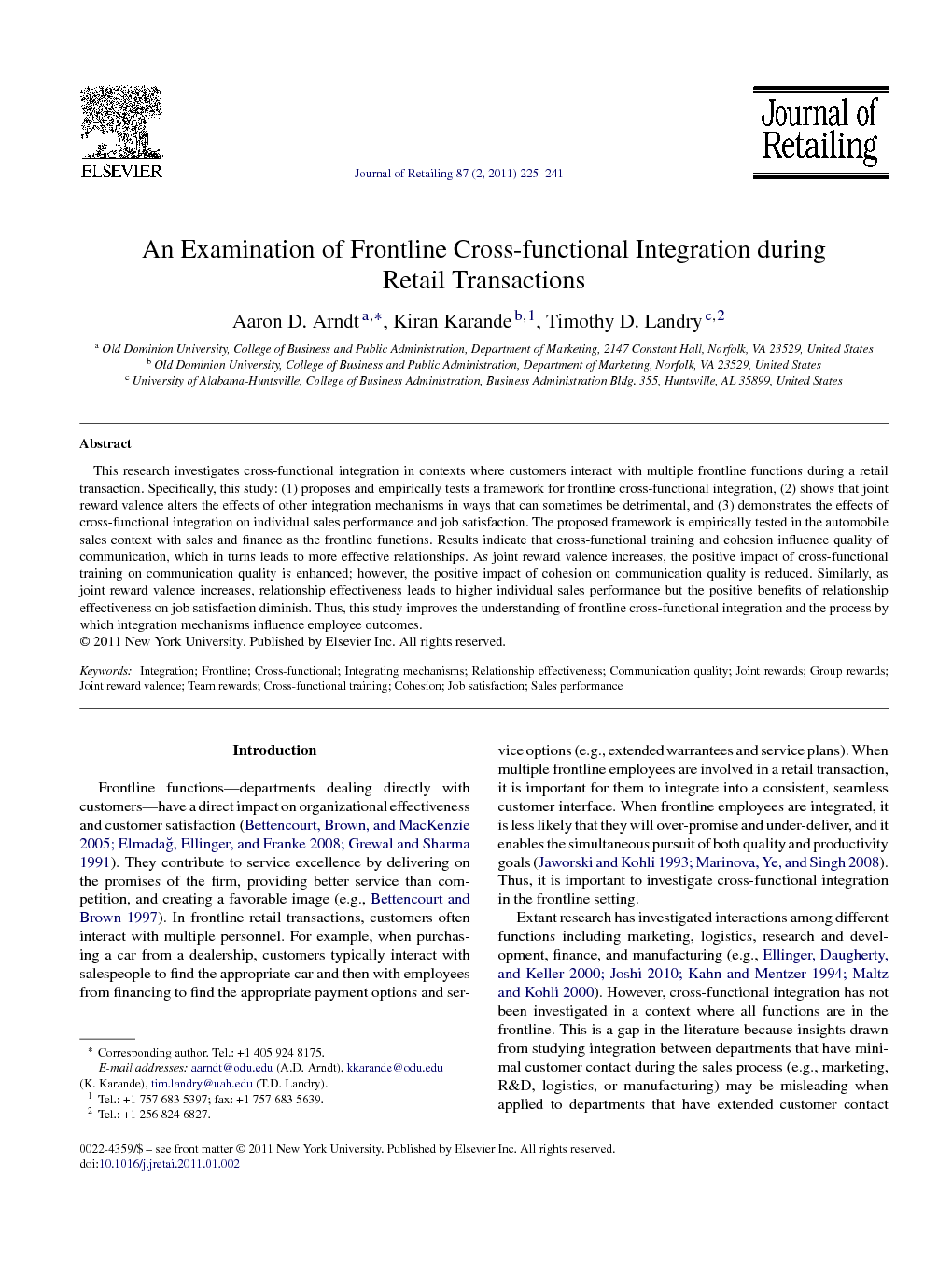 Frontline functions—departments dealing directly with customers—have a direct impact on organizational effectiveness and customer satisfaction (Bettencourt et al., 2005, Elmadağ et al., 2008 and Grewal and Sharma, 1991). They contribute to service excellence by delivering on the promises of the firm, providing better service than competition, and creating a favorable image (e.g., Bettencourt and Brown 1997). In frontline retail transactions, customers often interact with multiple personnel. For example, when purchasing a car from a dealership, customers typically interact with salespeople to find the appropriate car and then with employees from financing to find the appropriate payment options and service options (e.g., extended warrantees and service plans). When multiple frontline employees are involved in a retail transaction, it is important for them to integrate into a consistent, seamless customer interface. When frontline employees are integrated, it is less likely that they will over-promise and under-deliver, and it enables the simultaneous pursuit of both quality and productivity goals (Jaworski and Kohli, 1993 and Marinova et al., 2008). Thus, it is important to investigate cross-functional integration in the frontline setting. Extant research has investigated interactions among different functions including marketing, logistics, research and development, finance, and manufacturing (e.g., Ellinger et al., 2000, Joshi, 2010, Kahn and Mentzer, 1994 and Maltz and Kohli, 2000). However, cross-functional integration has not been investigated in a context where all functions are in the frontline. This is a gap in the literature because insights drawn from studying integration between departments that have minimal customer contact during the sales process (e.g., marketing, R&D, logistics, or manufacturing) may be misleading when applied to departments that have extended customer contact during the sales process. For departments that have minimal sales contact with customers, it is common for only a few key people to have frequent work-related contact outside of their departments (cf., Joshi and Sharma 2004). If only one employee directly acts as a liaison with other departments—that is, one ‘touch point’ between functional groups—integration between departments depends largely on the relationship between the two liaisons (Song, Xie, and Dyer 2000). In contrast, in frontline retail transactions it is not uncommon for each customer contact employee to have direct contact with other frontline employees involved in the transaction (Beatty et al. 1996). For example, salespeople in automobile dealerships usually have direct contact with those in financing. Thus, our study addresses this gap by developing a framework for frontline cross-functional integration, which includes its antecedents and consequences. In order to facilitate integration, managers use a range of integrating mechanisms including cross-functional training, joint rewards, cross-functional teams, formalization, social orientation, and spatial proximity (e.g., Cadogan et al., 2005, Mollenkopf et al., 2000 and Xie et al., 2003). There has been no systematic categorization of integration mechanisms, even though the various mechanisms differ in focus. We address this research gap by examining the impact of different categories of integrating mechanisms. At the employee level, integrating mechanisms provide impetus towards employees working together to achieve common goals. Integrating mechanisms are structures, procedures or control systems that managers can use to enhance integration between employees (Maltz and Kohli 2000). We contend that integrating mechanisms can be categorized as process-based (formal mechanisms for directing and evaluating how employees behave in cross-functional interactions), culture-based (informal social mechanisms that influence how employees behave across functions), and outcome-based (formal mechanisms for monitoring, evaluating, and compensating employees based upon joint performance and outcomes) (Baldauf et al., 2005 and Cravens et al., 2004). Our study considers one of each type: (1) cross-functional training, a process-based mechanism which provides knowledge and skills pertaining to other functional areas (Griffin and Hauser 1996), (2) cohesion, a culture-based mechanism which refers to employees’ perception of togetherness or sharing (Martin and Bush 2006), and (3) joint reward valence, an outcome-based mechanism which refers to offering attractive rewards for attaining group goals (Chimhanzi 2004). In terms of consequences, cross-functional integration has been shown to have many positive outcomes, such as reducing manifest conflict (Maltz and Kohli 2000), enhancing perceived relationship effectiveness and new product success (Ayers, Dahlstrom, and Skinner 1997), and positively impacting return on investment, return on sales, and return on assets (Song, Xie, and Dyer 2000). In the extant literature, the consequences of cross-functional integration are mainly at the organizational (e.g., Song, Xie, and Dyer 2000) and group level (e.g., Cadogan et al. 2005). A gap in the literature is that the impact of cross-functional integration on individual outcomes has not been investigated. It is important to understand the impact of integration on individual performance because the culmination of individual performances has a direct effect on unit-level performance; integration mechanisms have to influence each individual in order to increase the overall integration between functions. However, individuals may not respond to integrating mechanisms consistently, and, hence, certain individuals may benefit more from integration than others. To address this research gap, our study focuses on the individual performance and job satisfaction as the ultimate outcome of cross-functional integration. To summarize, the objectives of our study are to: 1. To propose a framework for frontline cross-functional integration, including its antecedents and consequences. 2. To categorize integration mechanisms as process-, culture-, or outcome-based and incorporate differences among the various integration mechanisms into this framework. 3. To better understand the process by which integrating mechanisms impact individual performance and job satisfaction of frontline employees.

A measurement model was estimated using confirmatory factor analysis with 32 items (nine for relationship effectiveness, five for communication quality, and three for perceptions of cross-functional training, five for cohesion, joint reward valence and job satisfaction). The confirmatory factor analysis showed a Chi-square of 832.55 (d.f. = 448), a CFI of .97, an IFI of .97, a RLI of .93 and a RMSEA of .082. The CFI, IFI, and TLI measures are above the recommended value of .90. RMSEA is slightly above the recommended value of .08 but because the other indicators are strong and the number of parameters being estimated is high, the model fit should be considered adequate. Using a cut-off of 0.40 for standardized factor loadings, no items were dropped and all t-values were significant (see Appendix A). Most factor loadings were higher than 0.70 indicating good convergent validity. Discriminant validity was analyzed using the test recommended by Bagozzi, Yi, and Phillips (1991), which assesses the significance of the difference between a constrained model (correlation between a pair of variables constrained to one) and an unconstrained model (correlation is free). Significant differences existed between all pairs of constructs indicating good discriminant validity. The composite reliabilities were all over the recommended level of .70 for each construct (Fornell and Larcker 1981). The correlation matrix along with the Cronbach's alpha for each scale explained is given in Table 2.