عنوان انگلیسی
Why are social network transactions important? Evidence based on the concentration of key suppliers and customers in China
دانلود فوری مقاله + سفارش ترجمه 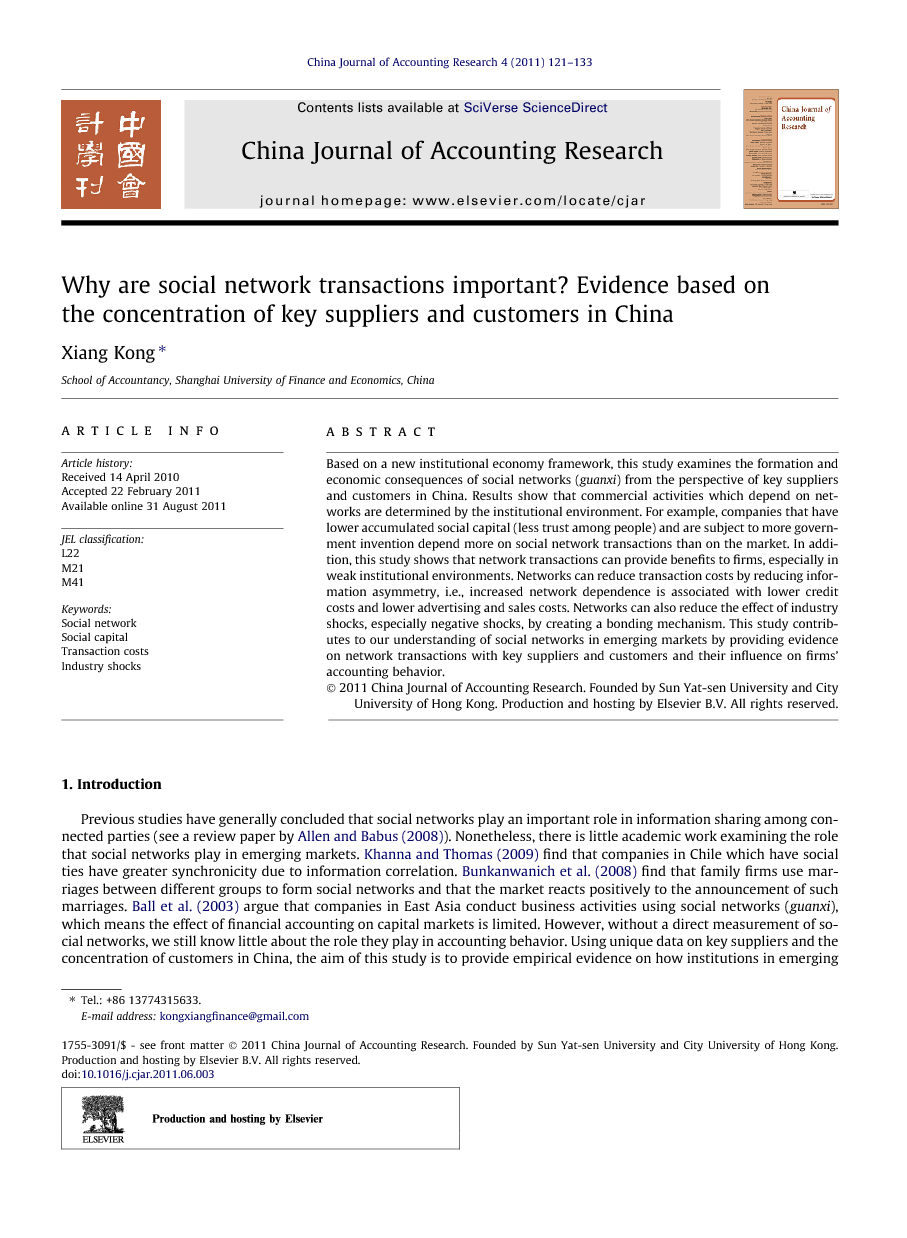 Based on a new institutional economy framework, this study examines the formation and economic consequences of social networks (guanxi) from the perspective of key suppliers and customers in China. Results show that commercial activities which depend on networks are determined by the institutional environment. For example, companies that have lower accumulated social capital (less trust among people) and are subject to more government invention depend more on social network transactions than on the market. In addition, this study shows that network transactions can provide benefits to firms, especially in weak institutional environments. Networks can reduce transaction costs by reducing information asymmetry, i.e., increased network dependence is associated with lower credit costs and lower advertising and sales costs. Networks can also reduce the effect of industry shocks, especially negative shocks, by creating a bonding mechanism. This study contributes to our understanding of social networks in emerging markets by providing evidence on network transactions with key suppliers and customers and their influence on firms’ accounting behavior.

Previous studies have generally concluded that social networks play an important role in information sharing among connected parties (see a review paper by Allen and Babus (2008)). Nonetheless, there is little academic work examining the role that social networks play in emerging markets. Khanna and Thomas (2009) find that companies in Chile which have social ties have greater synchronicity due to information correlation. Bunkanwanich et al. (2008) find that family firms use marriages between different groups to form social networks and that the market reacts positively to the announcement of such marriages. Ball et al. (2003) argue that companies in East Asia conduct business activities using social networks (guanxi), which means the effect of financial accounting on capital markets is limited. However, without a direct measurement of social networks, we still know little about the role they play in accounting behavior. Using unique data on key suppliers and the concentration of customers in China, the aim of this study is to provide empirical evidence on how institutions in emerging markets influence the formation of social networks and how the characteristics of network transactions influence accounting behavior. Following a new institutional framework proposed by Williamson (2000), the paper begins with a brief analysis of both informal (i.e., religion and customs) and formal (i.e., the legal system, degree of property rights protection, market arrangements) institutions in China and their effect on the governance structure of firms. We focus mainly on the influence of social network transactions, proxied by the concentration of key customers and suppliers. The specific analysis paths are presented in the diagram below.Based on a unique dataset of Chinese listed firms, we measure the concentration of key suppliers and customers as a measure of their dependence on social network transactions. Specifically, if a firm accomplishes its commercial activities with a limited number of key suppliers or customers, the firm will depend more on social network transactions. If the firm has a diverse range of suppliers or customers, it will depend less on social networks. Our sample consists of 7401 firm-level observations from 2001 to 2008. We find that firms are more likely to establish key customer or supplier connections in regions where the local economy is less market-oriented or has low social capital, as measured by the level of trust. We also find that the concentration of key customers and suppliers tends to reduce transaction costs, measured by the cost of sales/advertising and credit, especially in areas with weak institutions. We then find that the concentration of key customers and suppliers can reduce the effect of exogenous industry shocks, although, after distinguishing between positive and negative shocks, we find that the result is only significant for negative shocks. These results are robust to controlling for various firm characteristics. This research contributes to the literature in several ways. First, we complement previous studies (La Porta et al., 2002 and Zinglas et al., 2004) by showing that institutional differences in the protection of property rights, the local government’s propensity to expropriate from local firms and social capital accumulation have direct effects on firms’ dependence on social networks. In addition, this research provides further insights into the findings of recent studies on the role of social networks in the finance and accounting fields. Anecdotal evidence suggests that as an informal mechanism, social networks can play a large part in how people conduct business in China, although empirical evidence is rarely provided. The current research mainly focuses on the role of information sharing among corporate officers (e.g., Cohen et al., 2008; Hwang and Kim, 2009). The findings in this paper provide further evidence on the potential benefits of social network transactions and the risk management process. The rest of the paper is organized as follows. Section 2 reviews the literature and develops hypotheses. Section 3 introduces the methodology and data. Sections 4 and 5 report the empirical results and robustness checks, and Section 6 concludes.