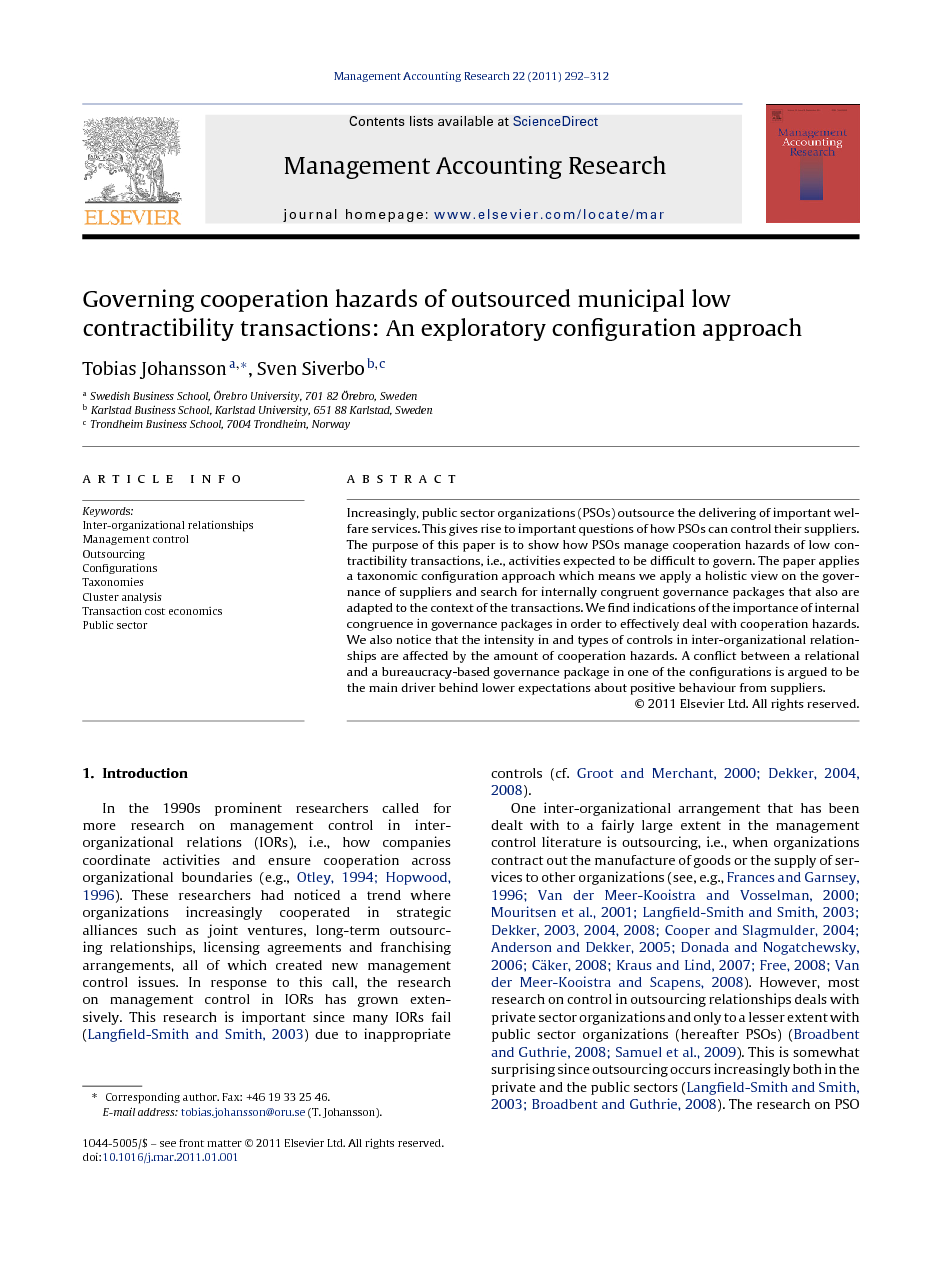 Increasingly, public sector organizations (PSOs) outsource the delivering of important welfare services. This gives rise to important questions of how PSOs can control their suppliers. The purpose of this paper is to show how PSOs manage cooperation hazards of low contractibility transactions, i.e., activities expected to be difficult to govern. The paper applies a taxonomic configuration approach which means we apply a holistic view on the governance of suppliers and search for internally congruent governance packages that also are adapted to the context of the transactions. We find indications of the importance of internal congruence in governance packages in order to effectively deal with cooperation hazards. We also notice that the intensity in and types of controls in inter-organizational relationships are affected by the amount of cooperation hazards. A conflict between a relational and a bureaucracy-based governance package in one of the configurations is argued to be the main driver behind lower expectations about positive behaviour from suppliers.

In the 1990s prominent researchers called for more research on management control in inter-organizational relations (IORs), i.e., how companies coordinate activities and ensure cooperation across organizational boundaries (e.g., Otley, 1994 and Hopwood, 1996). These researchers had noticed a trend where organizations increasingly cooperated in strategic alliances such as joint ventures, long-term outsourcing relationships, licensing agreements and franchising arrangements, all of which created new management control issues. In response to this call, the research on management control in IORs has grown extensively. This research is important since many IORs fail (Langfield-Smith and Smith, 2003) due to inappropriate controls (cf. Groot and Merchant, 2000, Dekker, 2004 and Dekker, 2008). One inter-organizational arrangement that has been dealt with to a fairly large extent in the management control literature is outsourcing, i.e., when organizations contract out the manufacture of goods or the supply of services to other organizations (see, e.g., Frances and Garnsey, 1996, Van der Meer-Kooistra and Vosselman, 2000, Mouritsen et al., 2001, Langfield-Smith and Smith, 2003, Dekker, 2003, Dekker, 2004, Dekker, 2008, Cooper and Slagmulder, 2004, Anderson and Dekker, 2005, Donada and Nogatchewsky, 2006, Cäker, 2008, Kraus and Lind, 2007, Free, 2008 and Van der Meer-Kooistra and Scapens, 2008). However, most research on control in outsourcing relationships deals with private sector organizations and only to a lesser extent with public sector organizations (hereafter PSOs) (Broadbent and Guthrie, 2008 and Samuel et al., 2009). This is somewhat surprising since outsourcing occurs increasingly both in the private and the public sectors (Langfield-Smith and Smith, 2003 and Broadbent and Guthrie, 2008). The research on PSO outsourcing deals mostly with the pros and cons of outsourcing per se or with the make-or-buy decision, and not explicitly with control issues (for an exception see Cristofoli et al., 2010). The majority of the studies yet carried out on outsourcing control in PSOs are about control of non-core activities or of ‘technical’ activities (see e.g., Seal, 1999). In this paper we further complicate the picture by focusing on the governance of public sector activities that are theoretically assumed difficult to govern (cf. Groot, 1999 and Cristofoli et al., 2010). Here we study inter-organizational control of suppliers engaged in ‘soft’ public sector activities, such as health care, social care and education. On a generic level, these activities are difficult to govern because of the low measurability of outputs,1 poor knowledge of the transformation process (Ouchi, 1977 and Hofstede, 1981), the typical high asset specificity (Speklé, 2001) and probity (Williamson, 1999), i.e., the contractual situation is characterised by low contractibility (cf. Domberger, 1998). Additionally, the governance of low contractibility transactions is often affected by political and institutional factors ( Hofstede, 1981, Van Slyke, 2006 and Johansson and Siverbo, 2009), not least by the legislation on procurement (Håkansson and Lind, 2007). This paper focuses specifically on one management control challenge that arises when organizations outsource activities: the cooperation problem. Our aim is to show how PSOs manage cooperation hazards of transactions characterised by low contractibility. In doing so, we build on the extended transaction cost economics (TCE) approach often used in the inter-organizational management control (IOMC) research (Van der Meer-Kooistra and Vosselman, 2000, Dekker, 2004, Dekker, 2008, Langfield-Smith and Smith, 2003 and Anderson and Dekker, 2005). Besides the traditional TCE explanation to governance structures (Williamson, 1981, Williamson, 1985 and Williamson, 1996) the extended TCE-framework acknowledges the importance of relational and institutional factors. We use a configuration approach which means we apply a holistic view on the governance of suppliers and search for internal congruent governance packages that are adapted to the context of the transaction. In Fig. 1 we describe the conceptual framework for the study. Taking the PSOs’ perspective, we consider an important measure of the effectiveness of the governance of suppliers is the PSO's expectations about supplier behaviour. These expectations are presumed to be an effect of how the PSO designs the governance package, i.e., how the outsourcer acts in the contact phase (market or trust orientation and supplier selection) and the control phase (results control, action control and/or social control). The governance effectiveness is furthermore expected to be affected by how the governance package as a whole is aligned to the governance context (market competition, dependence of suppliers and misalignment, later to be described in detail). Consequently, the governance effectiveness is presumed to be dependent on internal fit within the governance package as well as external fit between the governance context and the governance package.

The aim of this paper is to show how PSOs deal with cooperation hazards that arise from contracting out low contractibility activities. In our study we observe that PSOs deal with these hazards in dissimilar ways depending on the governance context. Using a survey sent to financial officers in Swedish municipalities, data processing with cluster analysis and applying a taxonomic configuration approach, we found three configurations reflecting two main archetypes: (1) intense bureaucrats, (2) ambivalent relations builders and (3) relaxed bureaucrats. This is to our knowledge the first study based on quantitative data that gives support to the empirical existence of the theoretically derived IOMC configurations (or patterns) of Van der Meer-Kooistra and Vosselman (2000) and Vosselman and Van der Meer-Kooistra, 2006a and Vosselman and Van der Meer-Kooistra, 2006b. Furthermore, our study shows that the governance design is of importance for governance effectiveness. This is a significant contribution to the literature on IOMC in general and to the literature on control in inter-organizational transactional relationships in particular, since few such studies (with the exception of Anderson and Dekker, 2005) have empirically assessed the performance implications of alignment (Dekker, 2004). In this study, we argue that the main cause for less positive expectations about supplier behaviour is internal misfit. This misfit stems primarily from an inclination to align parts of the governance package to the context (external fit). This observation shows the importance of a contingent configuration approach since such a finding would probably not have resulted if we had taken a traditional Cartesian approach to fit, as in previous studies by, for example, Anderson and Dekker (2005), Dekker, 2004 and Dekker, 2008 and Langfield-Smith and Smith (2003). It is not only the alignment of individual and independent management control variables to transactional characteristics that is of importance, but also the way in which different combinations of controls interact to form effective wholes. Hence, by applying a quantitative configuration approach and analysing more complex combinations of control, this study contributes to the IOMC literature (see Caglio and Ditillo, 2008). Extending the horizon beyond IOMC-research this study also adds to the few studies that have previously shown the merits and relevance of applying systems or configurations approaches in management accounting research (Chenhall and Langfield-Smith, 1998, Moores and Yuen, 2001, Gerdin, 2005 and Henri, 2008). A further contribution in the paper is the empirical test of recent theory about the link between control and expectations about behaviour (Vosselman and Van der Meer-Kooistra, 2009). In accordance with this theory we observed a link between the governance package design and relational signalling in inter-organizational transactional relationships. As emphasised earlier, this paper is exploratory. Therefore, its conclusions are indicative owing to the rather early stage of theory development and to the nature of the sample and data set, but also to the general weaknesses of research based on cross-sectional survey data. For example, we are unable to determine if the configurations are steady states or if they – or one of them, in particular – are in the middle of a transition process (cf. Miller, 1992 and Caglio and Ditillo, 2008). Moreover, we chose to study cooperation hazards and legitimate mistrust from the buyers’ perspective. In future research it would be appealing to also view control in public sector outsourcing relationships from the perspective of the suppliers. It would also be interesting to develop additional measures of the outcome of configurations, not least measures of efficiency in terms of transaction and production costs and measures of value.