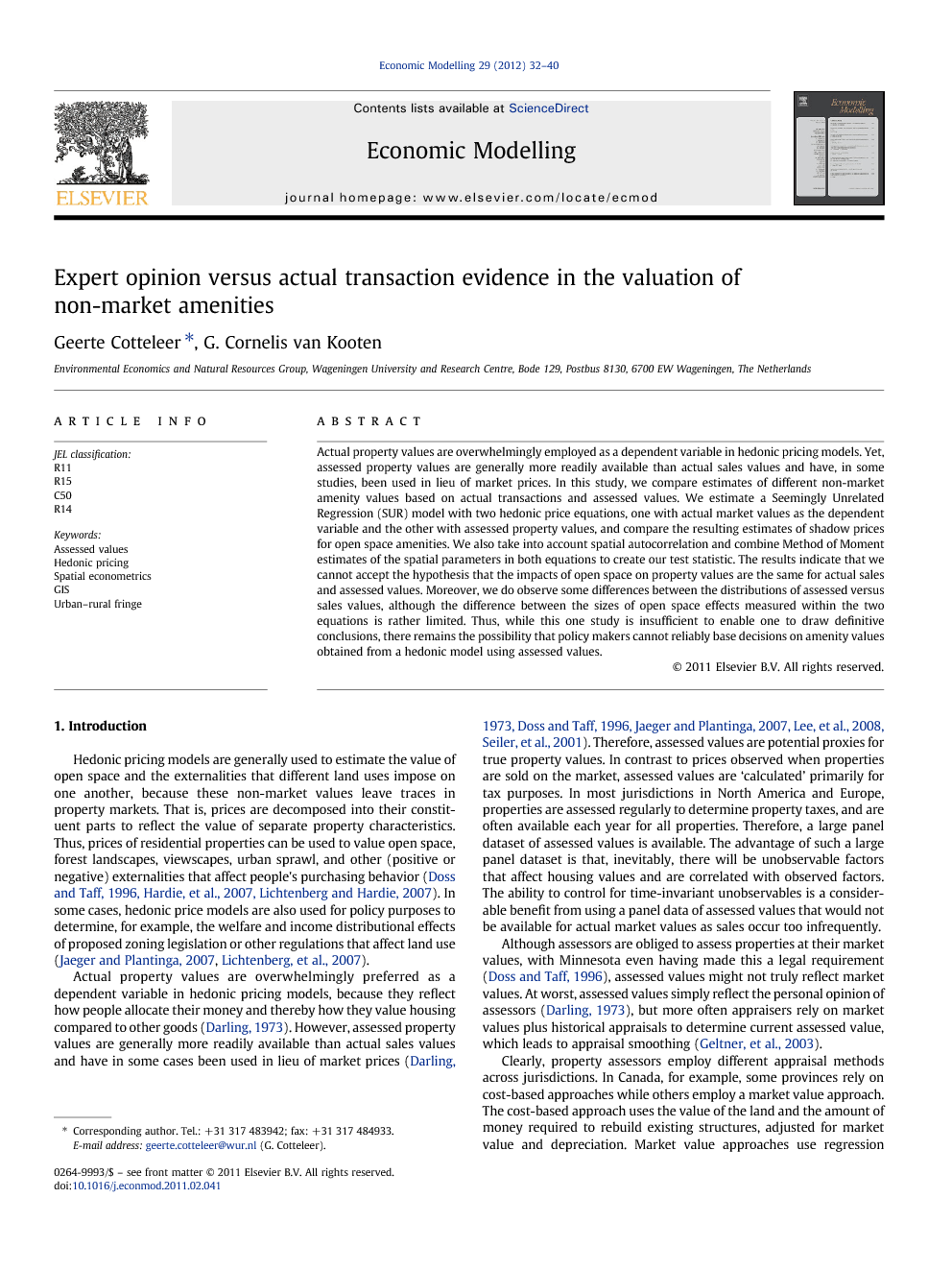 Actual property values are overwhelmingly employed as a dependent variable in hedonic pricing models. Yet, assessed property values are generally more readily available than actual sales values and have, in some studies, been used in lieu of market prices. In this study, we compare estimates of different non-market amenity values based on actual transactions and assessed values. We estimate a Seemingly Unrelated Regression (SUR) model with two hedonic price equations, one with actual market values as the dependent variable and the other with assessed property values, and compare the resulting estimates of shadow prices for open space amenities. We also take into account spatial autocorrelation and combine Method of Moment estimates of the spatial parameters in both equations to create our test statistic. The results indicate that we cannot accept the hypothesis that the impacts of open space on property values are the same for actual sales and assessed values. Moreover, we do observe some differences between the distributions of assessed versus sales values, although the difference between the sizes of open space effects measured within the two equations is rather limited. Thus, while this one study is insufficient to enable one to draw definitive conclusions, there remains the possibility that policy makers cannot reliably base decisions on amenity values obtained from a hedonic model using assessed values.

In this study, we employed data for the Saanich Peninsula on Vancouver Island, British Columbia, to investigate whether assessed values were good proxies for actual transaction values in a hedonic pricing model. In particular, we investigated the contribution to property values from open space provided by farmland and parkland. A spatial Seemingly Unrelated Regression model was estimated and used to construct test statistics for comparing estimated parameters in the assessment and market sales equations. Spatial error dependence and spatio-temporal lag dependence were taken into account in both the sales and the assessment equation, and we employed the Method of Moments estimator specified by Kelejian and Prucha (2004). Results indicate that we cannot accept the hypothesis that the impacts of open space on property values are the same in the assessed and actual transactions equations. Moreover, we observe differences between the distributions of assessed versus sales values. Specifically, we observe that average assessed values are lower than average sales values and the variation in assessed values is smaller than that of actual sales prices. While there are clear data advantages to using assessed values as the dependent variable in hedonic pricing models (primarily related to the availability of data), the current research suggests that use of market values is preferred to assessed values for determining the value of non-market amenities, at least without further comparison of both values in specific research settings. Intuition suggests that market data are to be trusted more than assessed values. Nonetheless, a finding that two parameters are significantly different from one another in a statistical sense does not mean that they are different in economically meaningful ways, which is what policymakers are presumably concerned about. As a caveat, it is important to note that property assessment systems differ significantly among jurisdictions, and this could affect the validity of applying the results reported here to other locations. The assessed values used in the current research are based on the cost-based approach to assessment. Using assessed values from a market-based approach to assessment poses an altogether different challenge for researchers.