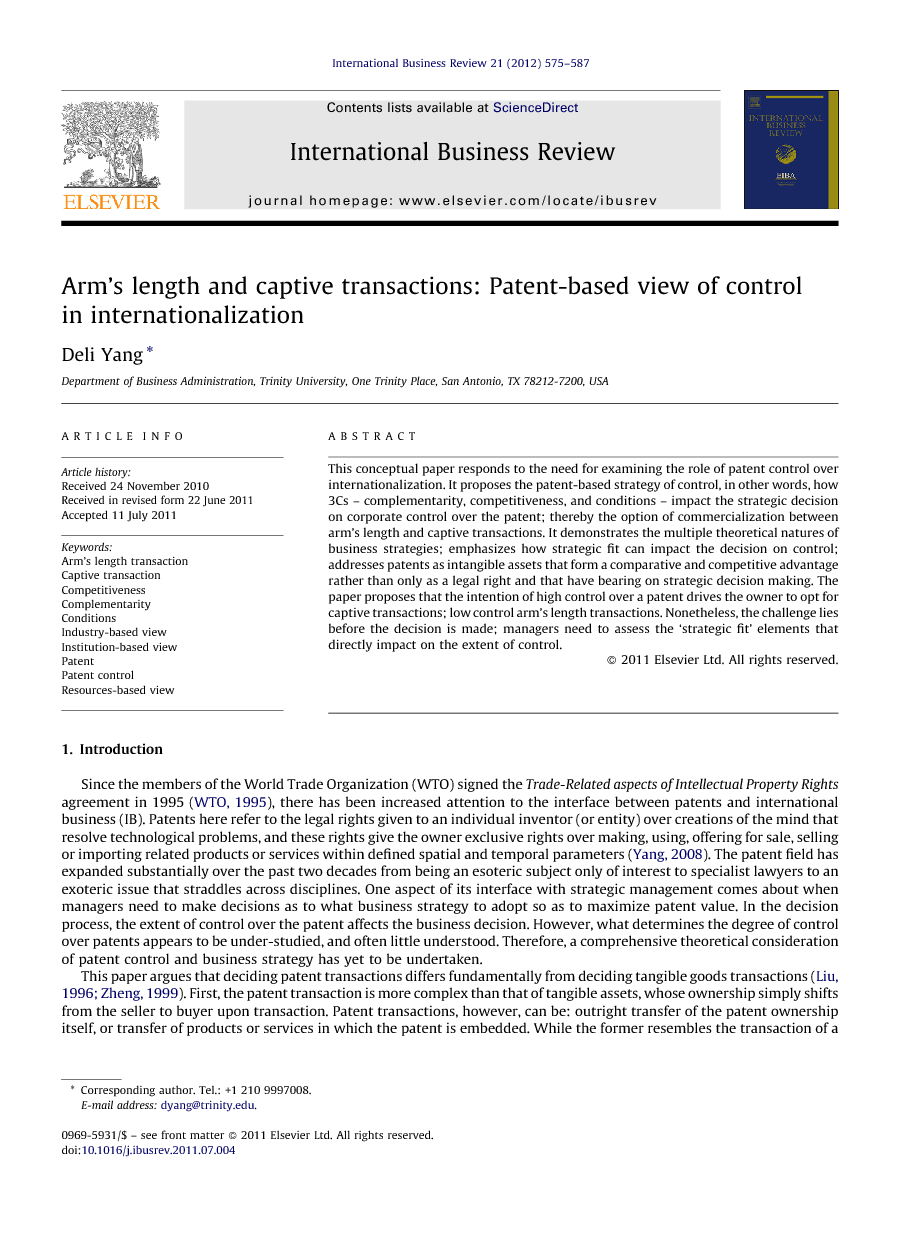 This conceptual paper responds to the need for examining the role of patent control over internationalization. It proposes the patent-based strategy of control, in other words, how 3Cs – complementarity, competitiveness, and conditions – impact the strategic decision on corporate control over the patent; thereby the option of commercialization between arm's length and captive transactions. It demonstrates the multiple theoretical natures of business strategies; emphasizes how strategic fit can impact the decision on control; addresses patents as intangible assets that form a comparative and competitive advantage rather than only as a legal right and that have bearing on strategic decision making. The paper proposes that the intention of high control over a patent drives the owner to opt for captive transactions; low control arm's length transactions. Nonetheless, the challenge lies before the decision is made; managers need to assess the ‘strategic fit’ elements that directly impact on the extent of control.

Since the members of the World Trade Organization (WTO) signed the Trade-Related aspects of Intellectual Property Rights agreement in 1995 (WTO, 1995), there has been increased attention to the interface between patents and international business (IB). Patents here refer to the legal rights given to an individual inventor (or entity) over creations of the mind that resolve technological problems, and these rights give the owner exclusive rights over making, using, offering for sale, selling or importing related products or services within defined spatial and temporal parameters (Yang, 2008). The patent field has expanded substantially over the past two decades from being an esoteric subject only of interest to specialist lawyers to an exoteric issue that straddles across disciplines. One aspect of its interface with strategic management comes about when managers need to make decisions as to what business strategy to adopt so as to maximize patent value. In the decision process, the extent of control over the patent affects the business decision. However, what determines the degree of control over patents appears to be under-studied, and often little understood. Therefore, a comprehensive theoretical consideration of patent control and business strategy has yet to be undertaken. This paper argues that deciding patent transactions differs fundamentally from deciding tangible goods transactions (Liu, 1996 and Zheng, 1999). First, the patent transaction is more complex than that of tangible assets, whose ownership simply shifts from the seller to buyer upon transaction. Patent transactions, however, can be: outright transfer of the patent ownership itself, or transfer of products or services in which the patent is embedded. While the former resembles the transaction of a physical good, most transfers are related to the latter type, and entail the authorization by the patent owner to another party to make, sell or use a product or service that depends in some way on the patent. Second, considerations are complex due to temporal and spatial restrictions on patents, which mean the legal rights to the use of the patent can only be owned by one person or entity within a defined geographical area for a specific period of time. Such protection is basically nation-based, and patents are not protected across national boundaries unless they are subject to integrated cross-country protection agreements. Patents also have a legal expiry date (usually 20 years): once a patent expires, anybody can use it. By comparison, physical goods rarely involve such legal complications. In spite of the complexity of patent transactions, the interface of patent control and strategic decision on the mode of international patent transaction appears scarcely to have been examined. The main reasons for little attention are the lack of data (Arora & Ceccagnoli, 2006), and the fact that patents have drawn close and wide business and management attention in recent years. Prior research has often treated patents as a macro factor, aiming to assess their impact on business strategy decisions (i.e., the stronger the patent protection in a country, the higher the scale of internationalization involved, Allred and Park, 2007, An and Puttitanun, 2006, Chung and Beamish, 2005 and Luo, 2001) and on partnership structures (Hagedoorn et al., 2005 and Oxley, 1999). These studies treat patents as a legal factor, and examine their causal relations with business strategies, rather than consider them as a transaction target. In contrast, this present study focuses on patents as a special product or process to assess the determinants of its transaction decisions associated with patent control. The paper therefore proposes a theoretical argument that managerial decision on the degree of control and subsequently the pattern of a patent transaction is determined by the 3Cs – complementarity, competitiveness and conditions. Although the model can apply to national transactions due to the factorial relevance, this paper focuses discussions on dealing with patent transactions in the more complex international context. The remainder of the paper first outlines the theoretical model, including defining some key concepts to establish fundamental understanding – the ‘what’ factor. We then focus on the theoretical and operational linkages of the model and make relevant propositions – the ‘how’ factor. Next, the importance of this research proposal is justified – the ‘why’ factor. The final section provides the implications for patent business practice and research.

This paper opens avenues for future research throughout the process of empirical confirmation or falsification on the theoretical proposal. First, the specifications of ALTs and CTs have not been examined: for example, as far as patents are concerned, ALTs can be divided into exclusive, sole and non-exclusive licenses, and CTs can be categorized into acquisition and green-field transactions, and 3Cs may have implications for further specification. The theoretical framework has also taken into account empirical elements in its establishment that may aid future research testing. First, it considers both home and host countries as possible relevant elements in patent transactions. The ‘competitiveness’ and ‘condition’ are particularly relevant to industry and the host country, which may or may not be the owner's own country: this flexibility allows for an analysis to suit the needs of practice for patent transactions at home and abroad. Such flexibility allows firms and researchers to assess different types of patent transactions based on each individual country. As a result, comparative analysis can be subsequently conducted in terms of country variations so that firms can decide what strategy to pursue in each targeted foreign market. This as a result, will help firms and researchers to assess which country and how many markets to enter to commercializing a particular patent related technology. Second, as far as the competitiveness is concerned, single industry analysis would allow a particular industry's unique features to be reflected in the test, but cross industrial analysis gives a view of industrial differences. In this process, it is important to find out if this model is industry-bound: the homogeneity or heterogeneity of an industry can affect corporate decision to a patent strategy choice (Kim & Vonortas, 2006: 242). Third, given the firm behavioral variations in patent transactions, grouped analysis between large multinationals and small- and medium-sized enterprises may reveal clearly the differences of strategic considerations. Finally, longitudinal studies can also be conducted to compare patent transactions over different periods to gauge the effect of the time factor, as patents may get dated, patent protection may change, and industrial development become more sophisticated. In the end, there is no simple approach to making an optimal transaction decision, as the 3Cs are interrelated in affecting control thereby transaction decisions. Although the general approaches above are applicable for firms, company-by-company case analysis, taking both the atomic and holistic approaches into account, is required before the best decision can be reached. This framework hence provides some rudimentary work for managers and theorists to explore the conditions and implications of transaction decisions fully in the future.