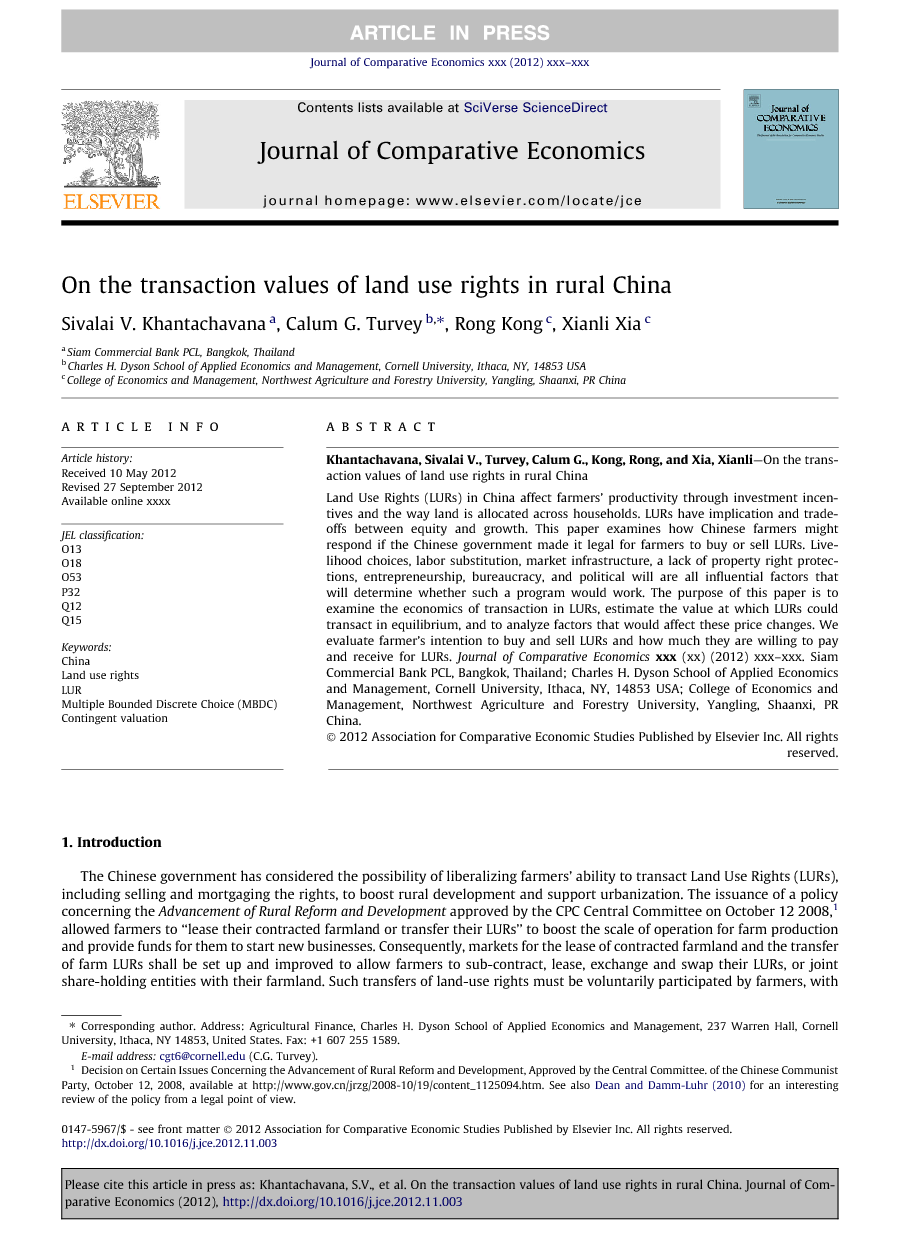 Land Use Rights (LURs) in China affect farmers’ productivity through investment incentives and the way land is allocated across households. LURs have implication and trade-offs between equity and growth. This paper examines how Chinese farmers might respond if the Chinese government made it legal for farmers to buy or sell LURs. Livelihood choices, labor substitution, market infrastructure, a lack of property right protections, entrepreneurship, bureaucracy, and political will are all influential factors that will determine whether such a program would work. The purpose of this paper is to examine the economics of transaction in LURs, estimate the value at which LURs could transact in equilibrium, and to analyze factors that would affect these price changes. We evaluate farmer’s intention to buy and sell LURs and how much they are willing to pay and receive for LURs.

The Chinese government has considered the possibility of liberalizing farmers’ ability to transact Land Use Rights (LURs), including selling and mortgaging the rights, to boost rural development and support urbanization. The issuance of a policy concerning the Advancement of Rural Reform and Development approved by the CPC Central Committee on October 12 2008,1 allowed farmers to “lease their contracted farmland or transfer their LURs” to boost the scale of operation for farm production and provide funds for them to start new businesses. Consequently, markets for the lease of contracted farmland and the transfer of farm LURs shall be set up and improved to allow farmers to sub-contract, lease, exchange and swap their LURs, or joint share-holding entities with their farmland. Such transfers of land-use rights must be voluntarily participated by farmers, with adequate payment and in accordance with the law” ( Chinareview.cn, 2008 and Dean and Damm-Luhr, 2010).2 Although the policy does not make explicit use of the terms ‘buy’ or ‘sell’, from an economic point of what is offered in the policy is a de facto right to buy or sell land.3 Whether or not large numbers of farmers will transact their land use rights remains to be seen and depends on whether the Central Committee’s objectives with the reforms are realized. Some economists believe that the policy reform allowing Chinese farmers to buy and sell LURs would lead to more efficient land use and allow much larger farms to be established. Part of this optimism likely arises from the growth observed in agricultural output and grain output immediately following the 1978 reforms through 1984 and the disappointing growth thereafter (see Brandt et al., 2002). If a market for trading farm LURs developed, farmers could gain a new source of cash income that could help alleviate the poverty in rural areas. This would also create more asset wealth for farmers and strengthen land security, which would in turn provide access to credit markets and encourage farmers to invest in farming and increase productivity. This appears to be the case for at least some farmers. In Nanzheng County, Shaanxi, annual rents have increased by 40% since policy reform ranging from 700 RMB/mu to 1200 RMB/mu. One farmer reported receiving 3000 Yuan in land transfers and this allowed him to work for employment wages of 900 RMB/month generating revenues of 13,000 RMB for the year (Shaanxi Daily 19/10/2011). In the Yangling district, in which our survey took place, the Ministry of Construction Management is piloting the non-profit Yangling Land Bank to serve as a mechanism for the smooth transition of land transfers across 10 administration villages. The Bank negotiates with individual farm households to create an inventory of land, and then matches this inventory to other farmers seeking to expand; agricultural enterprises looking to modernize; or other commercial interests. However, comprehending land markets, which in our context includes land use rights, requires a complex, not mutually exclusive, understanding of market transparency, credit markets, farm size-productivity relationships, agency conflicts, market risks, covariate risks, contingent markets, rent seeking, government intrusion and market distortions (Binswanger et al., 1993), many of which are absent in rural China. The issue at hand is in understanding how, in the presence of these complexities, a market for transactions in land use rights will evolve in rural China, who would be buyers, who would be sellers, and at what price? The purpose of this paper is to investigate the structure of a LUR market should LUR contracts become widely transactable. The main objectives are to (1) examine the economics of transaction in LURs; (2) evaluate farmer’s intentions to buy and sell LURs and how much they are willing to pay and receive for LURs and; (3) examine factors associated with potential buyer and seller of LURs. Our investigation is based on a household survey of 730 farm households in Shaanxi. Because no formal market exists to transact land use rights, we employ a Multiple Bounded Discrete Choice (MBDC) approach and use contingent valuation (CV) techniques to extract measures of willingness to sell (WTS) and willingness to buy (WTB) land use rights. We show that there is a great disparity between the minimum price at which a farmer will sell and that at which a buyer is willing to buy. The disequilibrium is so significant that we doubt that an equilibrium matching buyers and sellers would obtain any time soon. This paper is the first to provide a preliminary assessment of farmers’ willingness to buy and willingness to sell LURs.