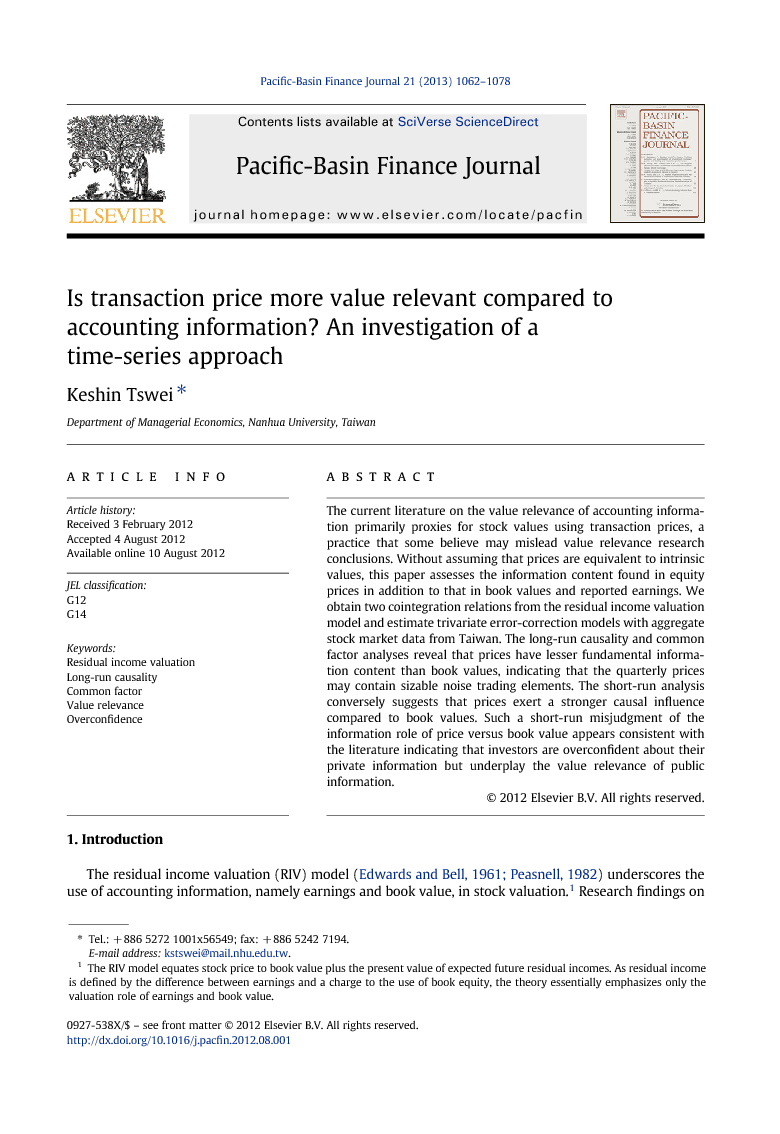 The current literature on the value relevance of accounting information primarily proxies for stock values using transaction prices, a practice that some believe may mislead value relevance research conclusions. Without assuming that prices are equivalent to intrinsic values, this paper assesses the information content found in equity prices in addition to that in book values and reported earnings. We obtain two cointegration relations from the residual income valuation model and estimate trivariate error-correction models with aggregate stock market data from Taiwan. The long-run causality and common factor analyses reveal that prices have lesser fundamental information content than book values, indicating that the quarterly prices may contain sizable noise trading elements. The short-run analysis conversely suggests that prices exert a stronger causal influence compared to book values. Such a short-run misjudgment of the information role of price versus book value appears consistent with the literature indicating that investors are overconfident about their private information but underplay the value relevance of public information.

Previous value relevance research has mainly used cross-section samples and proxied for stock values by transaction prices. In contrast, this paper assesses the information content in market prices in addition to that in book values and earnings, using longitudinal stock market data from Taiwan with time-series modeling methodology. The research objective and findings are in line with the concern over potentially biased research inferences caused by equating price to value. Our long-run analysis suggests that quarterly equity prices in Taiwan are less value relevant than the book values, implying that prices may contain huge noise elements. In contrast, an important short-run causal role found for prices is consistent with the public perception that market prices signal values. The implication of this research may be that the investors are advised to reassess the true capacity of price to signal value in the near term and to appreciate the book value relevance particularly over a longer horizon. This study is the only work to date that applies the long-run time-series tools to the value relevance of both accounting and market information. A natural direction for future research is to accumulate evidence on how consistently reliable or even valid these tools are for value relevance research.