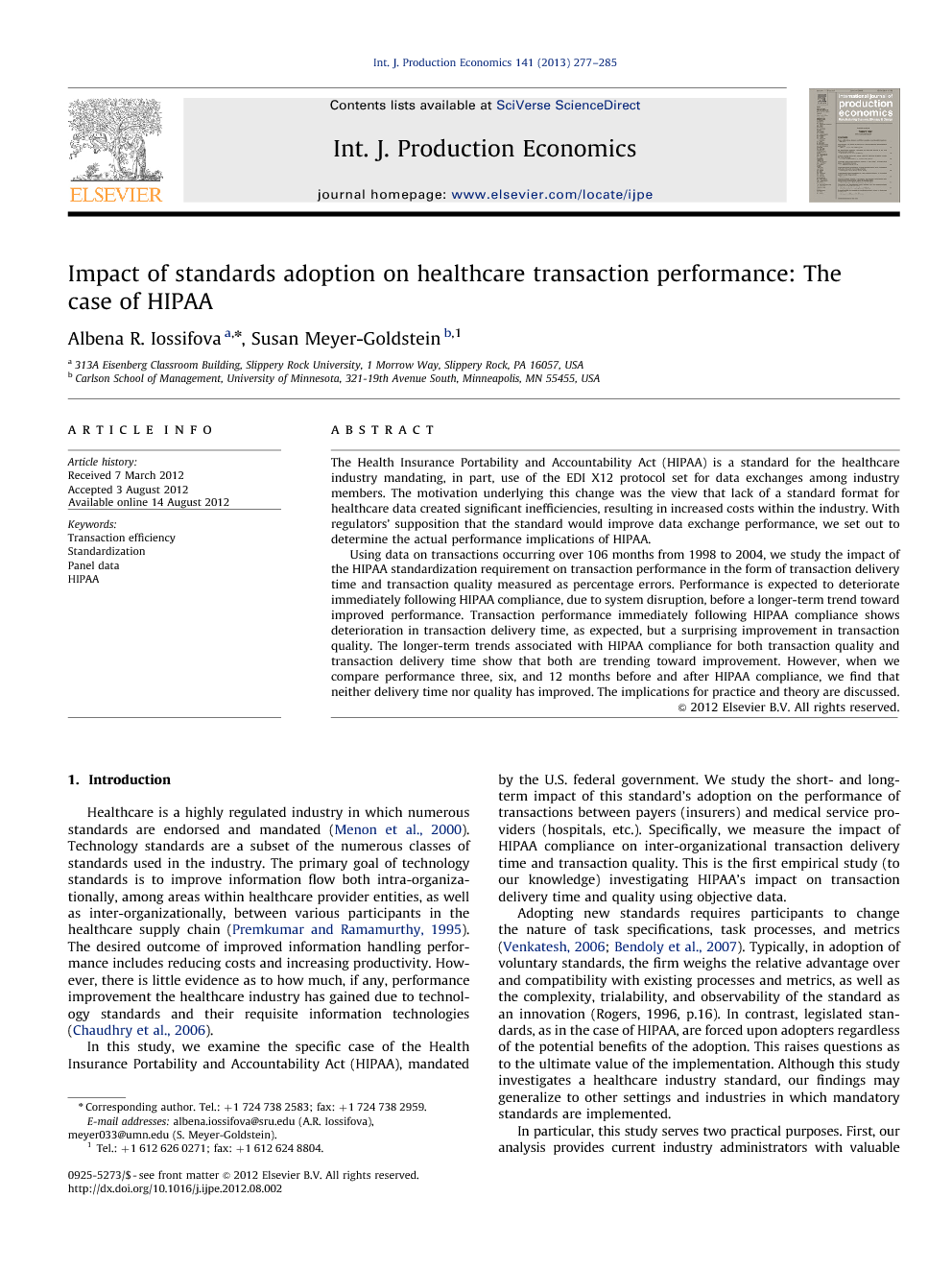 Healthcare is a highly regulated industry in which numerous standards are endorsed and mandated (Menon et al., 2000). Technology standards are a subset of the numerous classes of standards used in the industry. The primary goal of technology standards is to improve information flow both intra-organizationally, among areas within healthcare provider entities, as well as inter-organizationally, between various participants in the healthcare supply chain (Premkumar and Ramamurthy, 1995). The desired outcome of improved information handling performance includes reducing costs and increasing productivity. However, there is little evidence as to how much, if any, performance improvement the healthcare industry has gained due to technology standards and their requisite information technologies (Chaudhry et al., 2006). In this study, we examine the specific case of the Health Insurance Portability and Accountability Act (HIPAA), mandated by the U.S. federal government. We study the short- and long-term impact of this standard's adoption on the performance of transactions between payers (insurers) and medical service providers (hospitals, etc.). Specifically, we measure the impact of HIPAA compliance on inter-organizational transaction delivery time and transaction quality. This is the first empirical study (to our knowledge) investigating HIPAA’s impact on transaction delivery time and quality using objective data. Adopting new standards requires participants to change the nature of task specifications, task processes, and metrics (Venkatesh, 2006 and Bendoly et al., 2007). Typically, in adoption of voluntary standards, the firm weighs the relative advantage over and compatibility with existing processes and metrics, as well as the complexity, trialability, and observability of the standard as an innovation (Rogers, 1996, p.16). In contrast, legislated standards, as in the case of HIPAA, are forced upon adopters regardless of the potential benefits of the adoption. This raises questions as to the ultimate value of the implementation. Although this study investigates a healthcare industry standard, our findings may generalize to other settings and industries in which mandatory standards are implemented. In particular, this study serves two practical purposes. First, our analysis provides current industry administrators with valuable insight regarding adoption and implementation processes of mandatory standards. The results can inform their judgment in decisions related to monitoring and managing performance both prior to and following implementation (Venkatesh, 2006). Second, this study can aid administrators and regulators in planning future industry standards. Discerning the timing and magnitude of performance effects of mandatory standard compliance can guide these parties in two ways. The large-sample analysis reported here should help to create realistic expectations among industry and regulatory bodies related to the adoption of mandatory standards, and secondarily, aid these bodies in developing strategies to counteract the predictable performance effects of such standards implementation. This study contributes to the management literature by documenting the performance effects of a mandatory standard. The study results show that adoption of the HIPAA standard is associated with significant immediate (short-term) effects on transaction performance, specifically improvement in quality (percentage errors decrease) and degradation of delivery time (delivery time increases). In the longer-term, both performance measures show trending improvement, i.e., delivery time and percentage errors both decrease. However, there is no evidence that HIPAA is associated with an overall improvement in transaction delivery time or quality when performance is compared across three pre- and post-compliance time windows. The remainder of the paper is organized as follows. We first establish the practical and theoretical foundations for the study model, hypothesizing HIPAA’s immediate and trending relationships with performance as well as the pre- and post-implementation performance. We empirically test the research hypotheses using panel transaction data from a healthcare industry clearinghouse. We conclude the paper by drawing conclusions for both the research and practitioner communities.