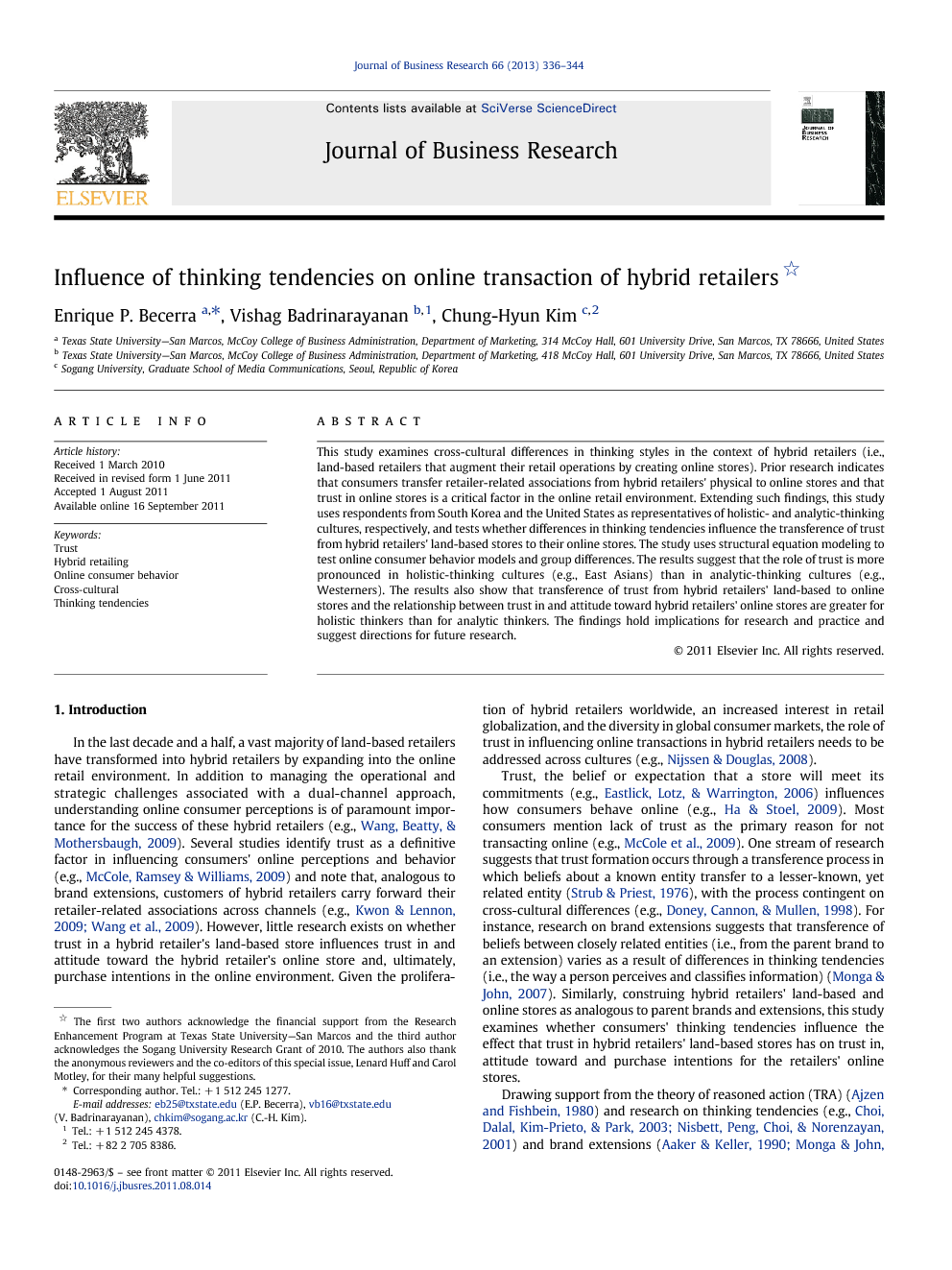 This study examines cross-cultural differences in thinking styles in the context of hybrid retailers (i.e., land-based retailers that augment their retail operations by creating online stores). Prior research indicates that consumers transfer retailer-related associations from hybrid retailers' physical to online stores and that trust in online stores is a critical factor in the online retail environment. Extending such findings, this study uses respondents from South Korea and the United States as representatives of holistic- and analytic-thinking cultures, respectively, and tests whether differences in thinking tendencies influence the transference of trust from hybrid retailers' land-based stores to their online stores. The study uses structural equation modeling to test online consumer behavior models and group differences. The results suggest that the role of trust is more pronounced in holistic-thinking cultures (e.g., East Asians) than in analytic-thinking cultures (e.g., Westerners). The results also show that transference of trust from hybrid retailers' land-based to online stores and the relationship between trust in and attitude toward hybrid retailers' online stores are greater for holistic thinkers than for analytic thinkers. The findings hold implications for research and practice and suggest directions for future research.

In the last decade and a half, a vast majority of land-based retailers have transformed into hybrid retailers by expanding into the online retail environment. In addition to managing the operational and strategic challenges associated with a dual-channel approach, understanding online consumer perceptions is of paramount importance for the success of these hybrid retailers (e.g., Wang, Beatty, & Mothersbaugh, 2009). Several studies identify trust as a definitive factor in influencing consumers' online perceptions and behavior (e.g., McCole, Ramsey & Williams, 2009) and note that, analogous to brand extensions, customers of hybrid retailers carry forward their retailer-related associations across channels (e.g., Kwon and Lennon, 2009 and Wang et al., 2009). However, little research exists on whether trust in a hybrid retailer's land-based store influences trust in and attitude toward the hybrid retailer's online store and, ultimately, purchase intentions in the online environment. Given the proliferation of hybrid retailers worldwide, an increased interest in retail globalization, and the diversity in global consumer markets, the role of trust in influencing online transactions in hybrid retailers needs to be addressed across cultures (e.g., Nijssen & Douglas, 2008). Trust, the belief or expectation that a store will meet its commitments (e.g., Eastlick, Lotz, & Warrington, 2006) influences how consumers behave online (e.g., Ha & Stoel, 2009). Most consumers mention lack of trust as the primary reason for not transacting online (e.g., McCole et al., 2009). One stream of research suggests that trust formation occurs through a transference process in which beliefs about a known entity transfer to a lesser-known, yet related entity (Strub & Priest, 1976), with the process contingent on cross-cultural differences (e.g., Doney, Cannon, & Mullen, 1998). For instance, research on brand extensions suggests that transference of beliefs between closely related entities (i.e., from the parent brand to an extension) varies as a result of differences in thinking tendencies (i.e., the way a person perceives and classifies information) (Monga & John, 2007). Similarly, construing hybrid retailers' land-based and online stores as analogous to parent brands and extensions, this study examines whether consumers' thinking tendencies influence the effect that trust in hybrid retailers' land-based stores has on trust in, attitude toward and purchase intentions for the retailers' online stores. Drawing support from the theory of reasoned action (TRA) (Ajzen and Fishbein, 1980) and research on thinking tendencies (e.g., Choi et al., 2003 and Nisbett et al., 2001) and brand extensions (Aaker and Keller, 1990 and Monga and John, 2007), this study develops and tests a framework that proposes that, for holistic thinkers (see Fig. 1, Model A), trust in a hybrid retailer's land-based store translates comprehensively into trust in the online store. In turn, trust in the online store influences attitude toward the online store and, ultimately, purchase intentions. In contrast, the framework proposes that, for analytic thinkers (see Fig. 1 Model B), trust in a hybrid retailer's land-based store influences both trust in and attitude toward the online store, with attitude toward the online store influencing purchase intentions. The results provide evidence of cross-cultural differences in the transference of trust from hybrid retailers' land-based to online stores and in the relationships among trust beliefs, attitude, and online purchase intentions. The findings yield key theoretical and managerial implications as well as directions for further research.