Journal : The Quarterly Review of Economics and Finance, Available online 10 May 2013 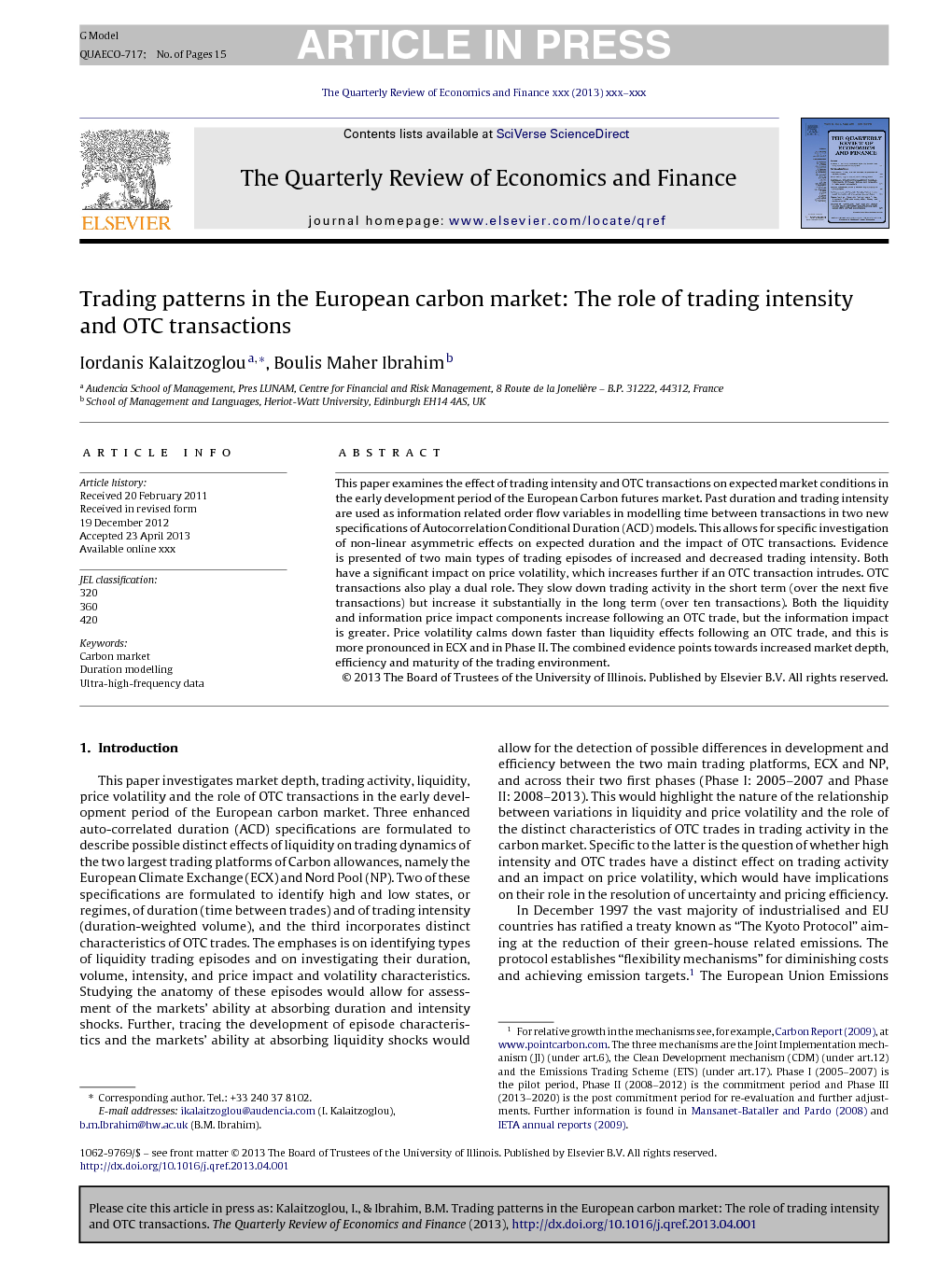 This paper examines the effect of trading intensity and OTC transactions on expected market conditions in the early development period of the European Carbon futures market. Past duration and trading intensity are used as information related order flow variables in modelling time between transactions in two new specifications of Autocorrelation Conditional Duration (ACD) models. This allows for specific investigation of non-linear asymmetric effects on expected duration and the impact of OTC transactions. Evidence is presented of two main types of trading episodes of increased and decreased trading intensity. Both have a significant impact on price volatility, which increases further if an OTC transaction intrudes. OTC transactions also play a dual role. They slow down trading activity in the short term (over the next five transactions) but increase it substantially in the long term (over ten transactions). Both the liquidity and information price impact components increase following an OTC trade, but the information impact is greater. Price volatility calms down faster than liquidity effects following an OTC trade, and this is more pronounced in ECX and in Phase II. The combined evidence points towards increased market depth, efficiency and maturity of the trading environment.

This paper investigates market depth, trading activity, liquidity, price volatility and the role of OTC transactions in the early development period of the European carbon market. Three enhanced auto-correlated duration (ACD) specifications are formulated to describe possible distinct effects of liquidity on trading dynamics of the two largest trading platforms of Carbon allowances, namely the European Climate Exchange (ECX) and Nord Pool (NP). Two of these specifications are formulated to identify high and low states, or regimes, of duration (time between trades) and of trading intensity (duration-weighted volume), and the third incorporates distinct characteristics of OTC trades. The emphases is on identifying types of liquidity trading episodes and on investigating their duration, volume, intensity, and price impact and volatility characteristics. Studying the anatomy of these episodes would allow for assessment of the markets’ ability at absorbing duration and intensity shocks. Further, tracing the development of episode characteristics and the markets’ ability at absorbing liquidity shocks would allow for the detection of possible differences in development and efficiency between the two main trading platforms, ECX and NP, and across their two first phases (Phase I: 2005–2007 and Phase II: 2008–2013). This would highlight the nature of the relationship between variations in liquidity and price volatility and the role of the distinct characteristics of OTC trades in trading activity in the carbon market. Specific to the latter is the question of whether high intensity and OTC trades have a distinct effect on trading activity and an impact on price volatility, which would have implications on their role in the resolution of uncertainty and pricing efficiency. In December 1997 the vast majority of industrialised and EU countries has ratified a treaty known as “The Kyoto Protocol” aiming at the reduction of their green-house related emissions. The protocol establishes “flexibility mechanisms” for diminishing costs and achieving emission targets.1 The European Union Emissions Trading Scheme (EU ETS), which is the mechanism that has been set up to achieve these objectives in Europe, has gradually gained complexity and has become the largest emissions trading scheme worldwide.2 This futures market of emission allowances has some unique features. First, it is a truly ‘cap and trade’ system, where overall allowances are capped in line with emission abatement targets and applies to specific industrial sectors. The overall quantity, and consequently prices and trading activity, are, therefore, politically influenced. Second, the market is less liquid than other financial markets and prices are highly influenced by economic outlook. Third, standardised contracts are traded simultaneously in mainly two non-synchronous but overlapping markets. Finally, a non-unique feature is that both markets permit entry and registry of over-the-counter positions.3 These features affect pricing and liquidity in various ways, of which those related to the last three features in particular are investigated in this paper. Several studies have been conducted on the carbon market. Kruger, Oates, and Pizer (2007) and Chevallier (2009), amongst others, provide a general description of the trading mechanisms and several stylised facts. Christiansen, Arvanitakis, Tangen, and Hasselknippe (2005) and Mansanet-Bataller, Pardo, and Valor (2007), amongst others, examine price dynamics, and report strong links with the prices of related commodities. Uhrig-Homburg and Wagner (2006) and Daskalakis, Psychoyios, and Markellos (2009), amongst others, analyse political influence on market efficiency. A growing strand of literature focuses on market microstructure issues such as the intraday price formation (Benz & Hengelbrock, 2008) and intraday price leadership between alternative compliance units (Mansanet-Bataller, 2010). Some liquidity issues have also been investigated. Mizrach and Otsubo (2011), for example, report increasing liquidity with increasing price impact; Ibikunle, Gregoriou, and Pandit (2011) contends that this is not necessarily due to increased volume, and Bredin, Hyde, and Muckley (2011) suggest that it might be related to information dissemination between OTC and screen trades. In particular, although Benz and Hengelbrock (2008) and Bredin et al. (2011) take into account event time (i.e., irregularly spaced events over time) duration is not yet fully investigated in EU ETS using ACD models.4Kalaitzoglou and Ibrahim (2012) is the exception. They model duration using a three-regime smooth transition ACD model with the main aim of identifying different groups of traders through variations in non-price related order flow variables. This paper also models event time through a combination of regime-switching and non-regime switching ACD models, but focuses instead on the identification of liquidity episodes and the investigation of their impact on prices and price volatility within different regimes of trading intensity. Further, the speed by which the markets absorb duration and intensity shocks varies across markets and phases especially when OTC trades intrude. A comparison across markets and phases of the liquidity and price characteristics of trading episodes, therefore, reveals distinct features of market development and carries implications on pricing efficiency. In addition, proper modelling of time between trades considers the informational content of transaction time and this has a variety of implications that are relevant to market and regulatory authorities, not least of which are suggestions for enhancing monitoring systems and improving market and price efficiency.5 Better understanding of liquidity and pricing dynamics would also enhance inventory management and order submission strategies by traders and investors as a consequence of better informed management of execution, liquidity and adverse selection risks. The remainder of this paper is organised as follows. Section 2 presents the methodology; Section 3 presents the data and a preliminary analysis; Section 4 presents a discussion of the implications of the estimation results and analyses of liquidity episodes; and Section 5 concludes.

The Carbon market appears to be structurally different from other liquid and well established financial markets. During Phase I and the beginning of Phase II the market was relatively new, rather illiquid and politically influenced. The contract under examination, which is the most heavily traded, has a long time to maturity and is traded in various markets in overlapping periods. This study investigates the role of liquidity in the identification of trading episodes through duration models that incorporate characteristics of order flow. Potential structural differences between the two largest exchanges (ECX and NP) and between Phases I and II are examined, with particular emphasis on the role of non-linearity, asymmetry and OTC transactions in trading patterns. The post-trade impact of these on liquidity and volatility is also examined. The main findings highlight the importance of liquidity in the trading process in the Carbon market. Trading activity seems to follow a momentum in two major types of episodes: high intensity episodes, characterised by decreased duration with prior increase in volume, and low intensity episodes, characterised by increased duration. Both episodes are associated with a subsequent increase in price volatility and are much shorter lived in Phase II. Variations in liquidity, therefore, are relevant to price, and reflect, at least partially, the resolution of uncertainty. This is faster in Phase II. Further, OTC transactions are distinct from other trades, including high intensity trades. Unlike other high intensity trades OTC trades seem to slow down market activity in the short term, and occur during relatively higher volatility episodes. Evidence is presented that OTC trades have a dual effect. In the long term (over ten transactions) they carry price-related information, and in the short term (over five transactions) their larger size depletes market liquidity. Both transitory and permanent components of price impact increase following an OTC trade, but the permanent information-related effect is much greater. Consequently, trading episodes might begin or stop because of information transmission or interflow between the OTC and the organised non-OTC markets. However, the sensitivity of market participants towards both effects – non-linear asymmetries and OTC transactions – varies considerably across the two different trading environments, and is closely related to liquidity. ECX appears to be a deeper, more liquid and more mature market than NP since liquidity and volatility shocks are smaller in magnitude and are absorbed faster. The effect instilled by a duration shock, for example, is far milder in ECX than in NP and in Phase II than in Phase I. Changes in volume start prior to a shock in trading intensity, but changes in duration largely occur after the trade. In ECX Phase II it takes only two subsequent transactions for duration to revert back to the levels experienced prior to the shock trade, while by contrast, in NP Phase II it takes up to five subsequent transactions. ECX has become deeper in Phase II relative to the more volatile Phase I while NP has become shallower, especially towards the fourth quarter of 2008. Accordingly, liquidity enhancing measures would enhance market viability and would lead to more accurate pricing, thereby assisting EU ETS to serve its purpose, which is the reduction of CO2 emissions.