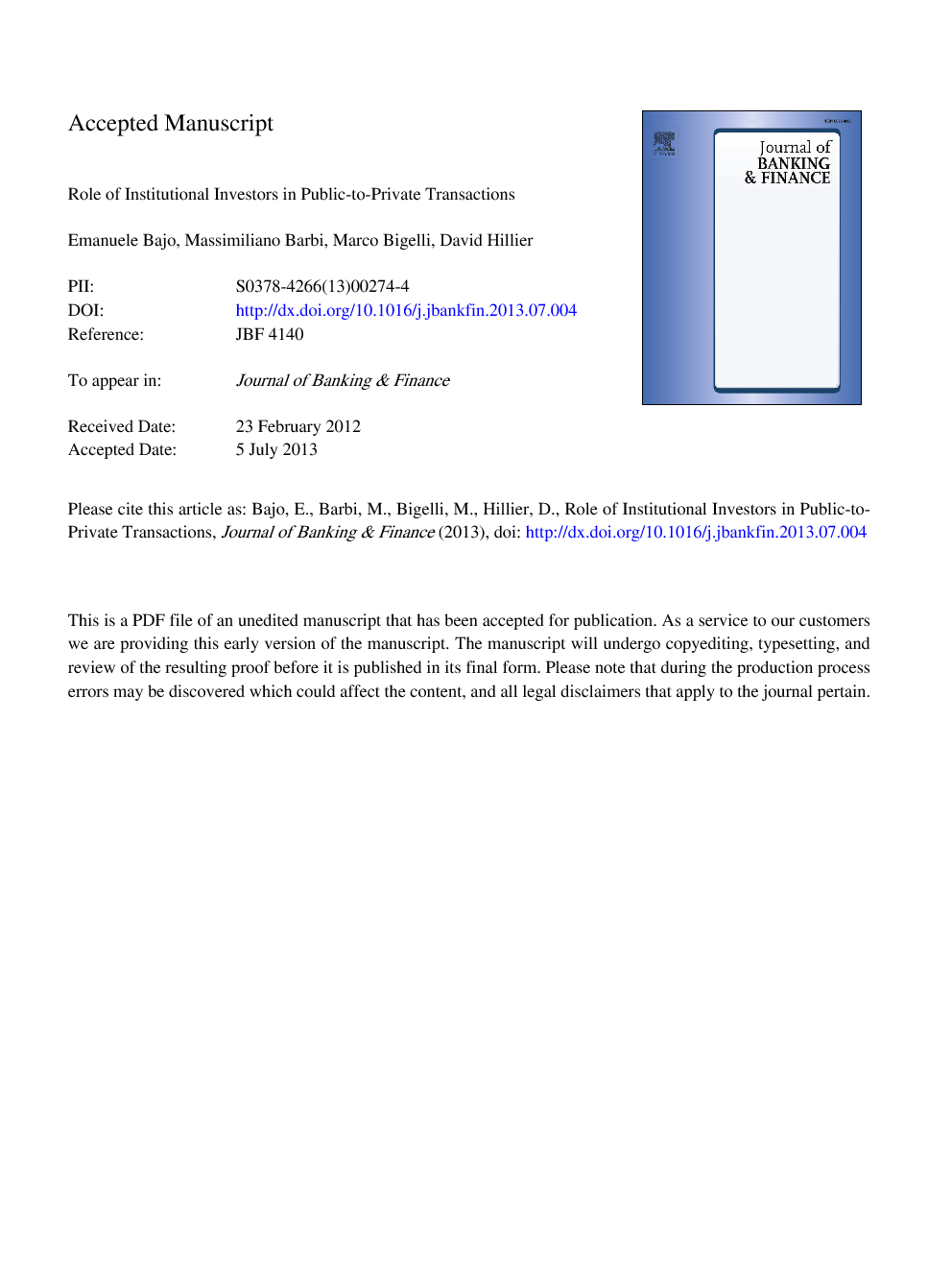 In Italy, as in many other European countries, listed firms will normally go dark through controlling owner-initiated tender offers. We find that institutional investors play a central role in the bid process and can protect minority shareholders from being frozen out in the bid. Specifically, tender offers are less likely to succeed when a firm has institutional investors in its ownership structure. When public-to-private offers are accepted, bid premiums are significantly greater if a financial institution (particularly when it is foreign, independent or activist) has a stake in the firm. We explore the effect of a number of hitherto unexplored factors on the takeover premium and find that shareholder agreements facilitate public-to-private acquisitions. Other factors, such as a threat to merge the target if the bid fails, or external validation of the offer price, have no impact on either the likelihood of delisting or the premium paid by the bidder.

In this paper, we show that institutional investors have a major impact on the likelihood of public-to-private tender offers being successful. We report evidence that the size of premium offered by the bidder is larger when a firm has institutional investors in its ownership structure. We also find that foreign institutions and those regarded as activist investors have the greatest influence on the bid process. A number of hitherto unexplored aspects of public-to-private bids were investigated in relation to bid success and the premium paid by the bidder. These are a) the threat of a merger with an unlisted company (in the event of an unsuccessful offer); b) the presence of an agreement among shareholders to surrender their shares to the bidder; and c) a fairness opinion offered by an independent entity. As would be expected, shareholder agreements to sell to the bidder increase the probability of a successful bid. We find very little evidence that merger threats and fairness opinions have any significance. The relevance of institutional investors in corporate activity is a debate that has been going on for many years and still has many more years to run. While there is substantial scope for institutional investors to collude with other shareholders or management, our research shows that there are a number of benefits to them being part of a firm’s ownership structure. Consistent with the theoretical work of Bennedsen and Wolfenzon (2000) and Gomes and Novaes (2006), we find that institutional investors can act as effective guardians of minority shareholders. There are a number of ways in which the research could be further developed. This study considers only the Italian context. However, the regulatory, legal and economic development of a country may dominate the role of institutional investors. This is especially the case in environments where investor protection and law enforcement are stronger than in Italy. It may be that institutional investors act as a substitute for other governance structures within or outside the firm and this could be examined via an international comparative study.