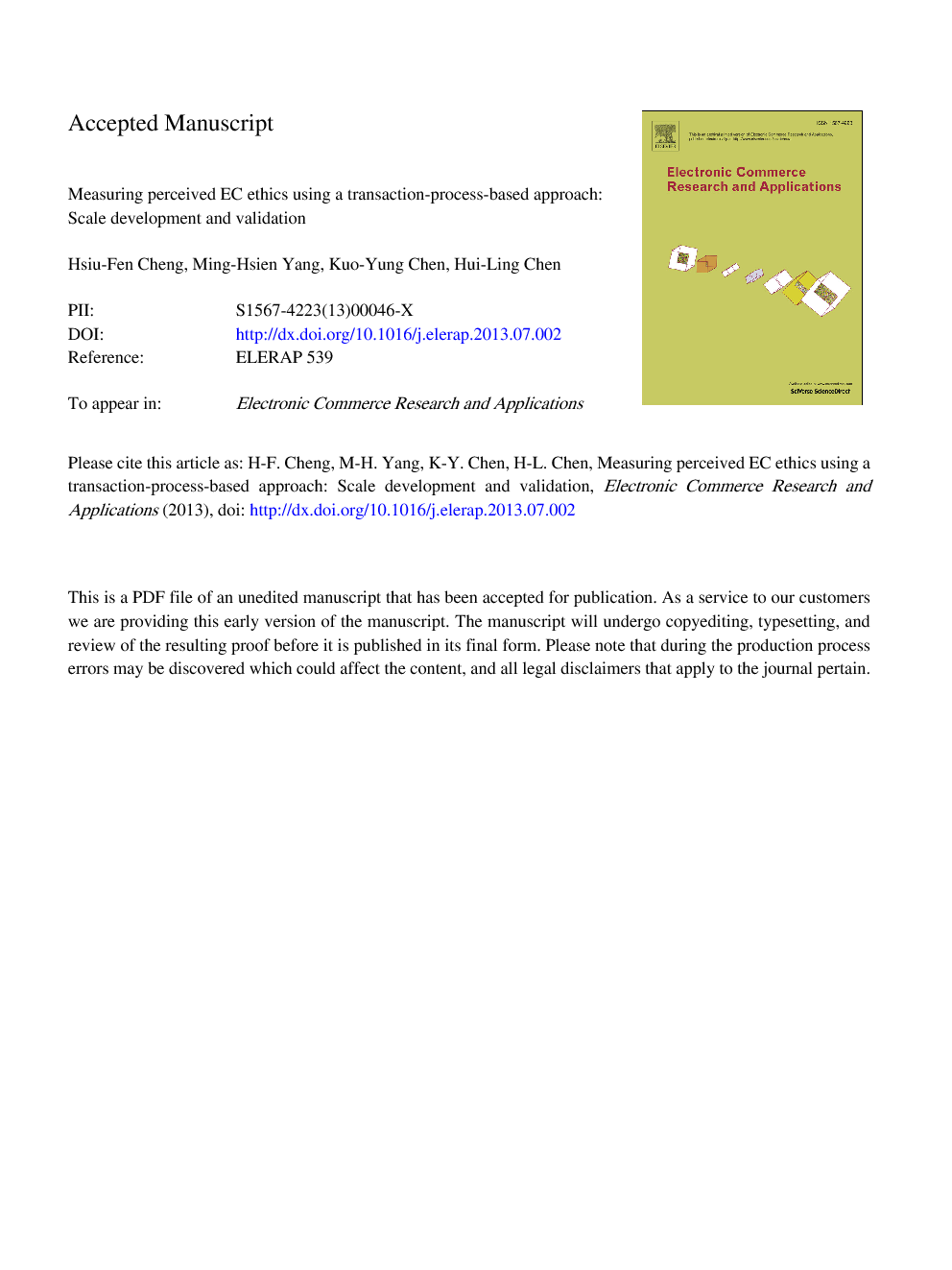 Concerns regarding ethical issues associated with online shopping are growing. Based on a framework that captures all stages of a transactional process, this study developed a transaction process-based scale, the eTransEthics scale, for assessing the consumer-perceived ethics of e-commerce websites. The results of applying exploratory factor analysis to data from 406 online shoppers indicate that eTransEthics comprises sales behavior, privacy, security, fulfillment, and service recovery. Data obtained from another sample of 548 online shoppers are utilized to confirm the exploratory factor analysis results using structural modeling techniques. These modeling results demonstrate that the scale has good construct validity and nomological validity. The analytical findings suggest that our scale is strongly predictive of consumer satisfaction and loyalty.

Dramatic growth in Internet usage has markedly changed the business processes for selling information and goods or services. Conventional commercial trade is gradually being replaced by e-commerce. Notably, global e-commerce revenue will grow to US$680 billion worldwide, an increase of 106.25% compared with 2006 revenue, and will hit a whopping US$963 billion by 2013 (MIC, 2009 and TechCrunch, 2011). e-commerce Internet applications have affected the ways in which enterprises conduct their business, and ethical issues associated with e-commerce have garnered the attention of both society and academia. The number of consumer concerns regarding ethical issues associated with online shopping has continued to increase. Factors such as privacy and security are considered the most important ethical concerns raised by consumers and researchers over the last decade (Román and Cuestas 2008). Additionally, some researchers have focused on deceptive sales practices (Grazioli and Jarvenpaa, 2003 and Román, 2010). However, regardless of the importance of privacy, security, and deception in e-commerce contexts, these studies were primarily conceptual (Beltramini, 2003, Grazioli and Jarvenpaa, 2003, Maury and Kleiner, 2002, Miyazaki and Fernandez, 2001 and Stead and Gilbert, 2001). Román (2007) developed a scale, which comprises security,privacy, non-deception, and fulfillment, to measure the consumer-perceived ethics of online retailers (CPEOR). Although the CPEOR scale exists that examine the consumer-perceived ethics of online retailers in general, few systematic attempts have been made to provide a transaction process framework for the specific nature of ethics concerns among Internet users. It is helpful to consider the transaction process when surveying electronic interactions between consumers and e-retailers (Bauer et al. 2005). Consumers do not like to be exposed to unethical sales behavior during the transaction process. Deception is merely one form of unethical sales behavior; other forms include the sale of dangerous or illegal products, conducting sales under the guise of marketing research, and blaming other organizations. Accordingly, sales behavior appears to be a proper substitute for non-deception in better understanding the consumer-perceived ethics of e-commerce. Investigating the consumer-perceived ethics of e-commerce from a transaction process-based perspective can give us a greater appreciation of this issue. To consider the complete e-commerce transaction process, the post-sale stage should also be included; consumers may experience unexpected service failure post-sale, and service recovery processes are implemented by enterprises when consumers complain (Spreng et al. 1995). Tax and Brown (1998) argued that consumers evaluate service recovery using concepts of distributive justice, procedural justice, and interactive justice. Jackson et al. (1997) argued that ethics are related to fairness, justice, and whether an action is right. Therefore, based on these arguments, this study characterizes service recovery as an ethical issue for consumers. This study aims to develop a transaction process-based scale. Based on a framework for capturing all stages of the electronic transaction process, the eTransEthics scale is proposed to assess the consumer-perceived ethics of e-commerce websites. In this study, we (1) systematically examine the nature and dimensionality of eTransEthics from the transaction process-based perspective; (2) attempt to operationalize the multidimensional notion of eTransEthics using a second-order construct and develop a scale for it; (3) propose and test a causal model centering on eTransEthics. Drawing on the transaction process, we propose that online consumers’ concerns center on five major dimensions—sales behavior, privacy, security, fulfillment, and service recovery. Furthermore, previous studies of traditional commercial settings have indicated that positive consumer perceptions about the ethical practices of companies can increase consumer satisfaction and loyalty (Román 2003). Thus, the influence of eTransEthics on consumer satisfaction and loyalty is analyzed to determine the scale’s nomological validity.

Some researchers believe that a systematic empirical study of e-commerce ethical issues must be conducted from the consumers’ perspective (Román 2007). A lack of an appropriate scale is one reason why such empirical studies do not exist. The current study develops a novel transaction process-based scale, the eTransEthics scale, which measures the overall consumer-perceived ethics of e-commerce websites. This study presents how useful the notion of the transaction process is in clarifying the dimensionality of eTransEthics, which consists of sales behavior, privacy, security, fulfillment, and service recovery. Particularly, the eTransEthics includes a new dimension: service recovery. In addition, sales behavior appears to be a proper substitute for the dimension of non-deception that is included in the CPEOR. Managerial implications are proposed for enterprises and suggestions regarding future studies are providedin the following paragraphs.