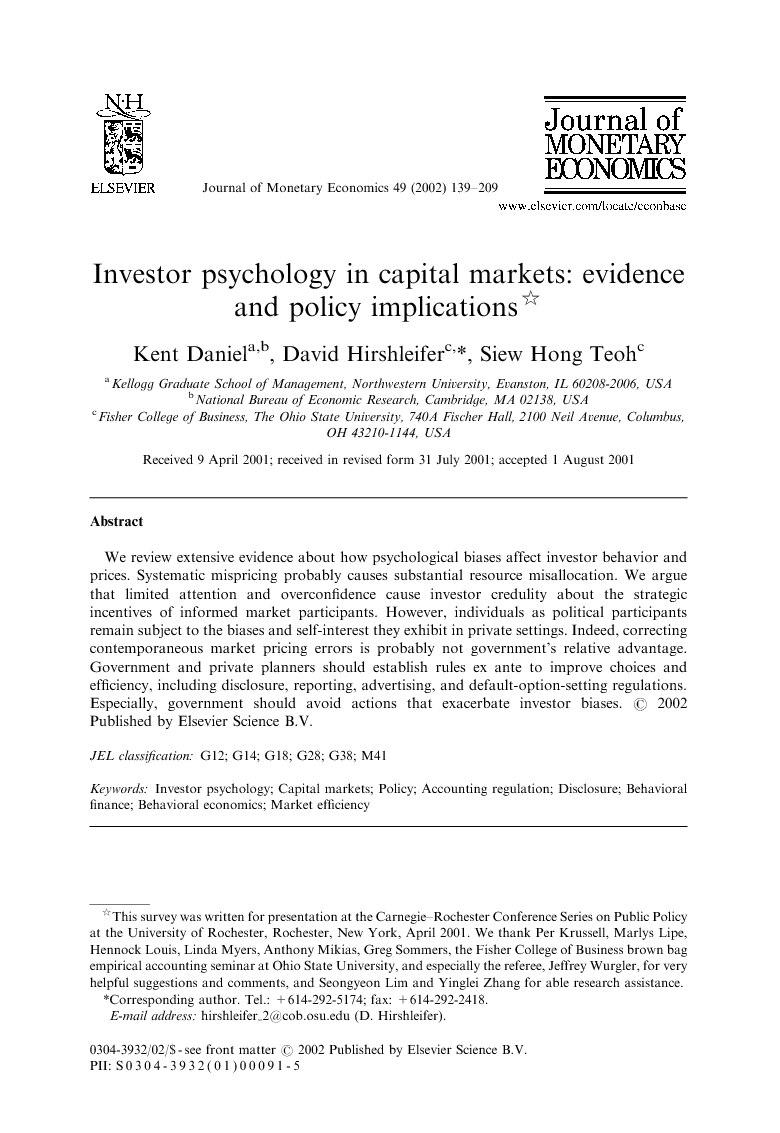 We have argued that there is now persuasive evidence that investors make major systematic errors. We further argue, though it is not absolutely a prerequisite for most of our policy conclusions, that the evidence is persuasive that psychological biases affect market prices substantially. Furthermore, there are some indications that as result of mispricing there is substantial misallocation of resources in the economy. Thus, we suggest that economists should study how regulatory and legal policies can limit the damage caused by imperfect rationality. But do not hand the car keys to junior just yet. Obviously, interest group politics distorts (or dominates) public discourse and government activity, with perverse results. Even if voters and officials sought solely to serve a broad public interest, there is no reason to think that regulators, politicians, courts, or individual voters are less subject to bias than are market prices — far from it. This suggests that detecting and responding to market pricing errors is not the government's relative advantage. Emotions and psychological biases in judgment and decision seem to have important effects on public discourse and the political process, leading to mass delusions and excessive focus on transiently popular issues. If individuals were fully rational in their market and political judgments, there would be a case for government intervention to remedy informational externalities in capital markets. The case against such intervention comes from the tendency for people in groups to fool themselves in the political sphere, and for pressure groups to exploit the imperfect rationality of political participants. These failings of the political process provide a case for creating political institutions that are tilted against governmental intervention in capital markets. This applies to the making of ex ante rules, and even more strongly to policies designed to correct alleged market mispricing ex post. However, we do argue that there is a good case for some minimally coercive and relatively low-cost measures to help investors make better choices and make the market more efficient. These involve regulation of disclosure by firms and by information intermediaries, financial reporting regulations, investment education, and perhaps some efforts to standardize mutual fund advertising. More controversially, a case can be made for regulations to protect foolish investors by restricting their freedom of action or the freedom of those that may prey upon them. Limits on how securities are marketed and laws against market manipulation through rumor-spreading may fall into this category. There is little cost to requiring companies to provide a standard warning, analogous to cigarette warning labels, to workers of the risks of plunging retirement money in their own company's stock. Regulating the way in which retirement investment options are presented to individuals (e.g., the status quo choice, and how choices are categorized) may have low cost yet may greatly affect lifetime outcomes. Especially, maintaining zero long-term average inflation would eliminate money illusion problems, including problems in remembering and comparing prices of goods and problems in assessing past investment returns.