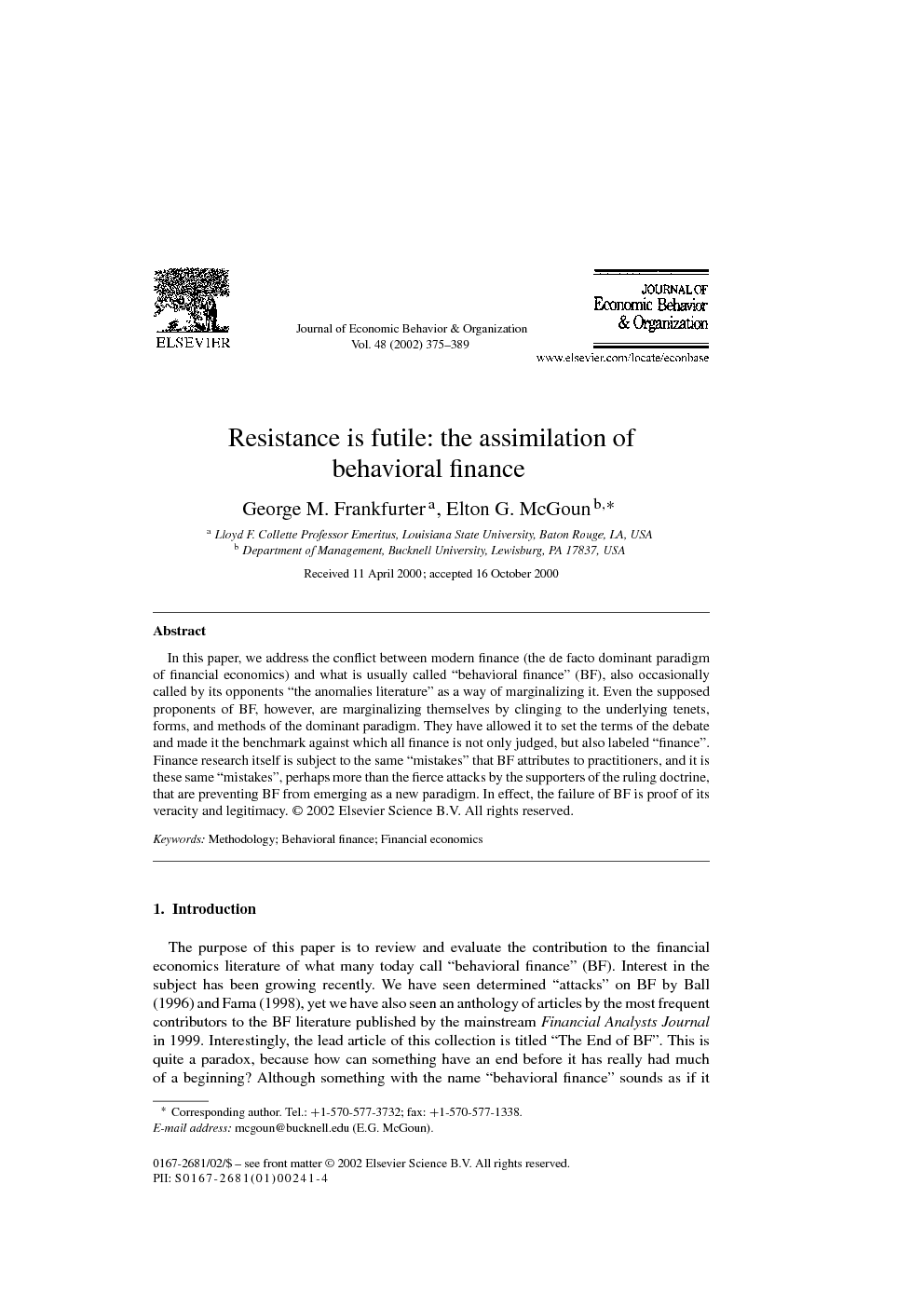 In this paper, we address the conflict between modern finance (the de facto dominant paradigm of financial economics) and what is usually called “behavioral finance” (BF), also occasionally called by its opponents “the anomalies literature” as a way of marginalizing it. Even the supposed proponents of BF, however, are marginalizing themselves by clinging to the underlying tenets, forms, and methods of the dominant paradigm. They have allowed it to set the terms of the debate and made it the benchmark against which all finance is not only judged, but also labeled “finance”. Finance research itself is subject to the same “mistakes” that BF attributes to practitioners, and it is these same “mistakes”, perhaps more than the fierce attacks by the supporters of the ruling doctrine, that are preventing BF from emerging as a new paradigm. In effect, the failure of BF is proof of its veracity and legitimacy.

The purpose of this paper is to review and evaluate the contribution to the financial economics literature of what many today call “behavioral finance” (BF). Interest in the subject has been growing recently. We have seen determined “attacks” on BF by Ball (1996) and Fama (1998), yet we have also seen an anthology of articles by the most frequent contributors to the BF literature published by the mainstream Financial Analysts Journal in 1999. Interestingly, the lead article of this collection is titled “The End of BF”. This is quite a paradox, because how can something have an end before it has really had much of a beginning? Although something with the name “behavioral finance” sounds as if it would be a new methodology or even a significant new paradigm for research in financial economics, BF has never been, and looks as if it may never be, either. In fact, it may really have ended before it began, and our intention in this paper is to describe how this happened. In the science-fiction television and film series Star Trek: The Next Generation, there is a species called ‘the Borg’, a collective of techno-organic drones acting in concert as a single organism. In their pursuit of perfection, they roam the galaxy in search of other species, whose capabilities they acquire through a process of assimilation—turning their captives into Borg and effectively absorbing their knowledge into the hive mind. The first line of every encounter with the Borg is familiar to Star Trek aficionados: “Resistance is futile. You will be assimilated”. We do not intend this paper to be an ad hominem attack on modern finance, but we cannot help but be struck by parallels with these characters from Star Trek. Although, modern finance’s homo economicus is an independent individual quite unlike a Borg drone, which will de-activate itself if detached from the collective, it is certainly a species in pursuit of perfection (in its information and markets), making precise cost-benefit analyses of every decision. Like the Borg, homo economicus’ favorite epithet is likely to be “Inefficient!”, the ultimate depravity. Modern finance itself appears to be something of a techno-organic life form, with inspired theoretical and empirical work combined with, and both augmented and circumscribed by, complex mathematics, massive data sets, and esoteric statistical tests.1 And the current encounter between modern finance and BF is not unlike the encounters between the Borg and the Starship Enterprise. Modern finance is attempting to assimilate BF, adding its capabilities, including a smattering of experimental methods, but without experiencing any fundamental changes in its own methodology, just as the Borg assimilate humans, acquiring their knowledge but destroying their humanity and turning them into drones. Elsewhere, we have discussed how modern finance has marginalized BF by making it the “anomalies literature” (Frankfurter and McGoun (2000)). But recent surveys of BF by its pioneers, who one would expect to be its champions, suggest that more is happening (Thaler, 1999, Statman, 1999, Shleifer, 1999 and Shefrin, 2000). BF is not being exiled to a remote planet; it is indeed being assimilated. And unlike the crew of the enterprise, BF is not resisting the process. In Section 2, we review how the efficient markets hypothesis (EMH) and the capital asset pricing model (CAPM), the cornerstones of modern finance, met with a seemingly fatal crisis in the discovery of numerous effects that they could not explain. And in Section 3, we discuss how BF, which some have suggested as a solution to the crisis, has been labeled “the anomalies literature”, preserving not only the hegemony of modern finance, but also precluding any possibility for its refutation and/or the emergence of an alternative. Then in Section 4, we describe the strange phenomenon of how even the supposed proponents of BF cling to the underlying tenets, forms, and methods of modern finance, necessarily resulting in the assimilation of BF into modern finance. In closing in Section 5, we show how finance research itself is subject to the same judgmental “mistake” that BF has discovered in finance practice. The findings of BF may simultaneously explain its assimilation and prove its point.