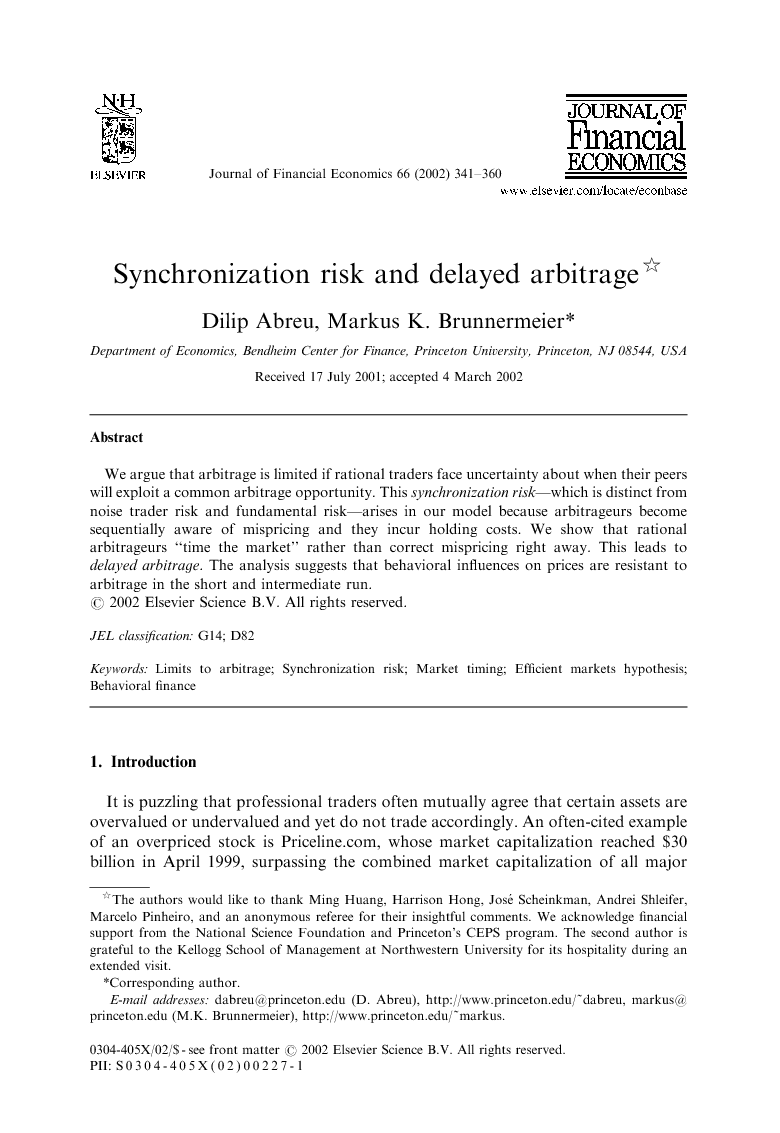 We argue that arbitrage is limited if rational traders face uncertainty about when their peers will exploit a common arbitrage opportunity. This synchronization risk—which is distinct from noise trader risk and fundamental risk—arises in our model because arbitrageurs become sequentially aware of mispricing and they incur holding costs. We show that rational arbitrageurs “time the market” rather than correct mispricing right away. This leads to delayed arbitrage. The analysis suggests that behavioral influences on prices are resistant to arbitrage in the short and intermediate run.

This paper presents a new explanation—synchronization risk—for why arbitrage might be limited and behavioral biases in prices persist. The distinctive feature of synchronization risk compared to noise trader risk is that it is not directly caused by behavioral traders. It is each arbitrageur's uncertainty about the timing of other arbitrageurs’ actions, combined with the desire to minimize holding costs, that causes each trader to delay an arbitrage trade. As a consequence, and contrary to the prediction of the efficient markets hypothesis, there can be significant and long-lasting departures from efficient prices. Nevertheless, our analysis suggests that the price of an asset is (loosely) anchored to its fundamental value since in our model mispricing is corrected more quickly the larger it is. Apart from the basic result of delayed arbitrage, the model also provides an explanation for fads and fashion in the acquisition and use of information and for why “bad news travels slowly.” Many extensions of the basic model could be usefully pursued. Perhaps the most challenging is to model the price process more explicitly than we have done. Another task that merits future research is to model the behavioral traders’ decision-making based explicitly on well-documented psychological biases. In that setting, arbitrageurs who want to “read the mind of the market” would not only have to predict the behavior of other rational arbitrageurs, but would also have to take account of the evolving behavior of irrational traders. Such models would combine synchronization risk with endogenous noise trader risk.