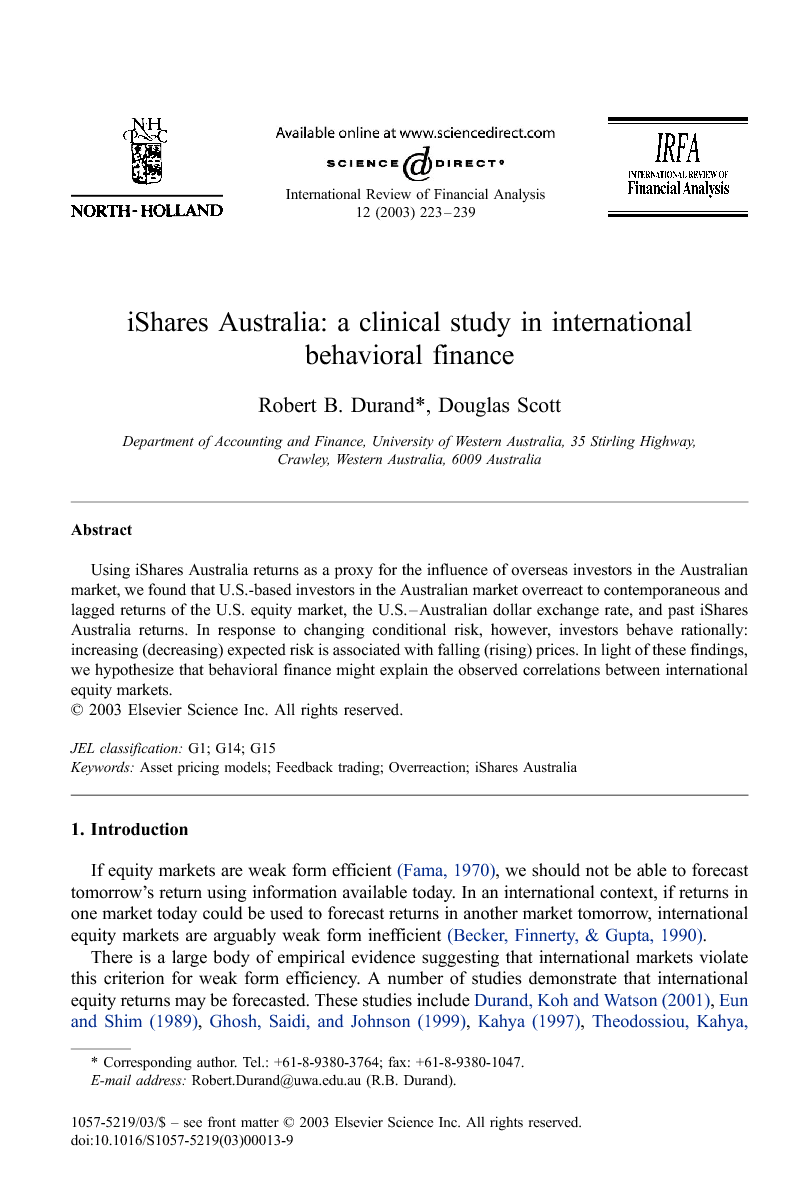 Using iShares Australia returns as a proxy for the influence of overseas investors in the Australian market, we found that U.S.-based investors in the Australian market overreact to contemporaneous and lagged returns of the U.S. equity market, the U.S.–Australian dollar exchange rate, and past iShares Australia returns. In response to changing conditional risk, however, investors behave rationally: increasing (decreasing) expected risk is associated with falling (rising) prices. In light of these findings, we hypothesize that behavioral finance might explain the observed correlations between international equity markets.

If equity markets are weak form efficient (Fama, 1970), we should not be able to forecast tomorrow's return using information available today. In an international context, if returns in one market today could be used to forecast returns in another market tomorrow, international equity markets are arguably weak form inefficient (Becker, Finnerty, & Gupta, 1990). There is a large body of empirical evidence suggesting that international markets violate this criterion for weak form efficiency. A number of studies demonstrate that international equity returns may be forecasted. These studies include Durand, Koh and Watson (2001), Eun and Shim (1989), Ghosh, Saidi, and Johnson (1999), Kahya (1997), Theodossiou, Kahya, Koutmos, and Christofi (1997), and Theodossiou and Lee (1993). Durand et al. (2001) illustrate the general findings of this literature. Using 11 years of daily data, they test a number of variables for their influence on seven Pacific-Rim markets and find that the U.S. equity markets have a significant leading relationship with those markets (Australia, Hong Kong, South Korea, Malaysia, Singapore, Taiwan, and Thailand). In the equation modelling Australian returns, for example, the R2 is, at around 27%, surprisingly high. In a related work, Olienyk, Schweback, and Zumwalt (1999) approach the topic of global market integration using World Equity Benchmark Shares (WEBS), now known as iShares,1 and Standard & Poor's Depository Receipts (SPDRs) and find that the markets represented by the WEBS have equilibrium relationships with the U.S. market and that there are short-run inefficiencies among the instruments which might be arbitraged. This paper focuses on iShares Australia to examine why such a relationship might exist between the United States and a foreign market. While we might have chosen any number of markets, we have chosen Australia due to the strong relationship documented by Durand et al. (2001). In particular, we explore how foreign investors (in this case, investors active in the U.S. market) in the Australian market respond to changes in their domestic information set. We cannot directly observe these overseas investors' participation in the Australian market.2 Therefore, we use iShares Australia to proxy for American-based investors' interest in the Australian market. Therefore, through analysing iShares Australia, we can learn valuable lessons about the behavior of international investors. Recent empirical studies analysing the behavior of foreign investors have found evidence of positive feedback behavior Choe et al., 1999, Froot et al., 2001 and Grinblatt and Keloharju, 2000. De Long, Shleifer, Summers, and Waldmann (1990) demonstrate how positive feedback trading affects stock prices. Barberis, Shleifer, and Vishny (1998) and Daniel, Hirshleifer, and Subrahmanyam (1998) demonstrate how overreaction influences prices. We also find phenomena which are consistent with behavioral models. Furthermore, we also find investors responding rationally to perceived risk in keeping with Bekaert and Wu (2000). Our behavioral story is similar to Kim, Szakmary, and Mathur (2000) who use American Depository Receipts (ADRs) to examine transmission of stock price movements between ADRs and their underlying stocks, traded on their home markets. They found that, although the most influential factor in pricing ADRs is their underlying shares, exchange rates and the U.S. market are also factors. They further found that the full effect is not immediate and persists over several days. This is indicative of an underreaction by investors to exchange rate and underlying stock movements, possibly caused by market inefficiencies. We find similar results, with the return on iShares Australia being strongly related to both its own lagged values and contemporaneous and lagged values of the return on the U.S. market. Moreover, iShares Australia has a strong relationship with the contemporaneous value of the change in the U.S.–Australia exchange rate. Our finding with respect to expected risk and the returns of iShares Australia is consistent with Bekaert and Wu (2000). It appears that the anticipated increase in volatility raises the required return on iShares Australia, which leads to an immediate decline in price. In this regard, investors are behaving rationally, rather than quasi-rationally, as indicated by the results for return and volume. This relationship is also in keeping with Busse (1999). Busse attributes the negative association with expected volatility to the incentives of fund managers who are compensated based on risk-adjusted return performance. Unlike the fund managers that Busse studied, however, we assume that iShares Australia attracts predominately retail investors.3 We examine volume for its possible relationship to returns and vice versa (following, for example, Brennan et al., 1998 and Lo and Wang, 2000).4 We do not find any relationship between volume and returns, returns and volume, or volume and conditional risk. There is a suggestion in our analysis that trading patterns may be consistent with the pattern of overreaction to U.S. market movements that we document. The remainder of this paper is organized as follows. Section 2 outlines the data analysed in this study. Section 3 discusses the relationship of iShares Australia to the Australian market and the appropriateness of iShares Australia as a proxy for the Australian market. Section 4 discusses the determinants of changes in iShares Australia price and volume. Section 5 reports the results when conditional risk is incorporated in the analysis. Section 6 concludes the paper.

This paper has studied the determinants of iShares Australia returns to examine how foreign investors in the Australian market respond to changes in their domestic information set. We have chosen iShares Australia due to the empirical evidence that the American market influences the Australian market. In understanding how foreigners in the Australian market are influenced, perhaps we learn something of why the U.S. market seems to drive the Australian market. We found that iShares Australia has a positive correlation with contemporaneous and lagged variation in the U.S. market; an inverse negative correlation with contemporaneous and lagged variation in the exchange rate and a negative relationship with its own lagged values. Thus, the evidence is inconsistent with weak form market efficiency. Indeed, the behaviors are consistent with investors overreacting to price-sensitive information. While we find no support for a price/volume relationship, we see some support for the notion that the joy of trading is infectious; we argue that this is consistent with our argument that iShares Australia traders are motivated by quasi-rational urges. We divide our sample into two subperiods, delimited by a change in the Federal Reserve's policy stance from expansionary to deflationary (the former being the first period, the second the latter), and found that our analysis is consistent in both subperiods. The behavioral explanation of iShares Australia prices, however, is not the whole story. We found that the negative association of returns and expected risk is consistent with the familiar return/risk trade-off from the paradigms of financial economics. Similarly, we found a positive relationship, albeit one seemingly confined to the first of the subperiods we study, between contemporaneous risk and return. Thus, our story for iShares Australia supports theories from both rational and quasi-rational finance. If, as we have argued, our analysis is a suitable proxy for overseas (predominately U.S. retail) activity in a foreign (in this case, the Australian) market we can perhaps offer some explanations for the violation of weak form efficiency in the international marketplace. We see weak form inefficiency because market participants overreact to available information. Prices cannot reflect all information efficiently if investors do not process such information efficiently. It remains an open question as to why investors might believe that daily movements in the U.S. market convey as much information about the Australian market as they appear to do. While Australia has growing exports in advanced goods and services, its major comparative advantage would still appear to be in agriculture and mining. While America is a major recipient of Australian exports (importing as much as South Korea), the Japanese market is far more important to Australia. The strength of the American economy may be important for Australia, but the strength of the relationship found in this paper suggests a far stronger linkage. Perhaps, this too, is consistent with our overreaction story.