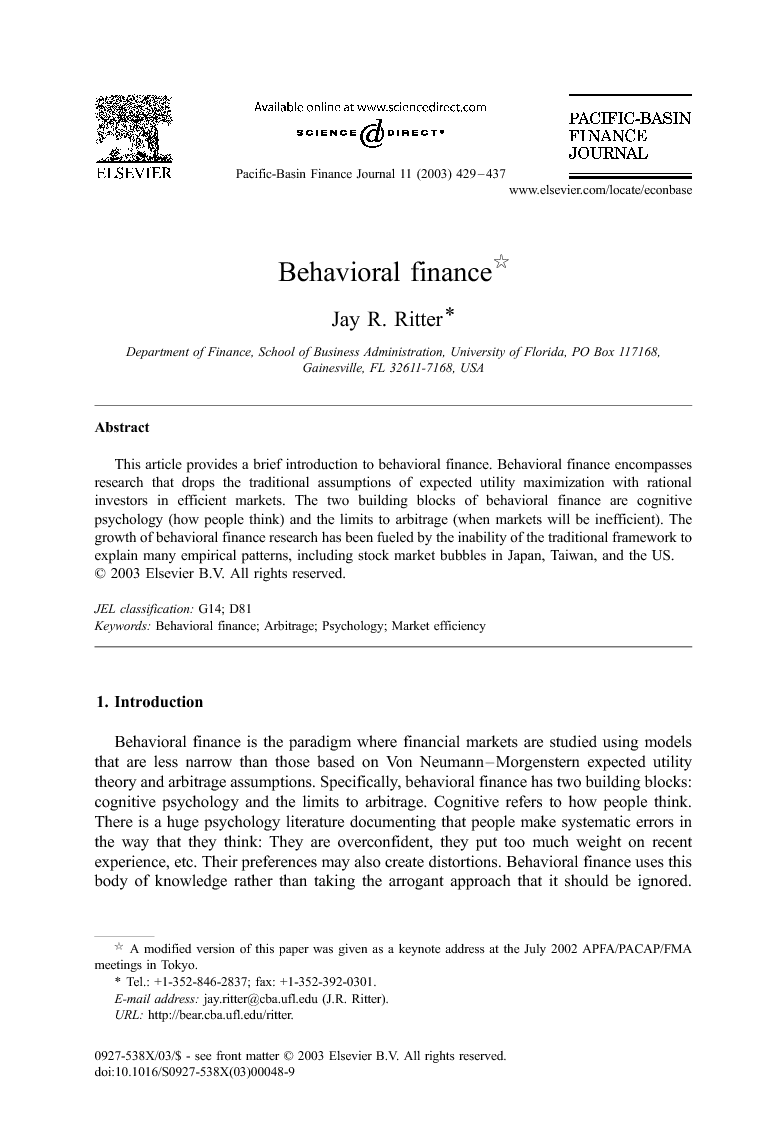 Behavioral finance is the paradigm where financial markets are studied using models that are less narrow than those based on Von Neumann–Morgenstern expected utility theory and arbitrage assumptions. Specifically, behavioral finance has two building blocks: cognitive psychology and the limits to arbitrage. Cognitive refers to how people think. There is a huge psychology literature documenting that people make systematic errors in the way that they think: They are overconfident, they put too much weight on recent experience, etc. Their preferences may also create distortions. Behavioral finance uses this body of knowledge rather than taking the arrogant approach that it should be ignored. Limits to arbitrage refers to predicting in what circumstances arbitrage forces will be effective, and when they will not be. Behavioral finance uses models in which some agents are not fully rational, either because of preferences or because of mistaken beliefs. An example of an assumption about preferences is that people are loss averse—a $2 gain might make people feel better by as much as a $1 loss makes them feel worse. Mistaken beliefs arise because people are bad Bayesians. Modern finance has as a building block the Efficient Markets Hypothesis (EMH). The EMH argues that competition between investors seeking abnormal profits drives prices to their “correct” value. The EMH does not assume that all investors are rational, but it does assume that markets are rational. The EMH does not assume that markets can foresee the future, but it does assume that markets make unbiased forecasts of the future. In contrast, behavioral finance assumes that, in some circumstances, financial markets are informationally inefficient. Not all misvaluations are caused by psychological biases, however. Some are just due to temporary supply and demand imbalances. For example, the tyranny of indexing can lead to demand shifts that are unrelated to the future cash flows of the firm. When Yahoo was added to the S&P 500 in December 1999, index fund managers had to buy the stock even though it had a limited public float. This extra demand drove up the price by over 50% in a week and over 100% in a month. Eighteen months later, the stock price was down by over 90% from where it was shortly after being added to the S&P. If it is easy to take positions (shorting overvalued stocks or buying undervalued stocks) and these misvaluations are certain to be corrected over a short period, then “arbitrageurs” will take positions and eliminate these mispricings before they become large. However, if it is difficult to take these positions, due to short sales constraints, for instance, or if there is no guarantee that the mispricing will be corrected within a reasonable timeframe, then arbitrage will fail to correct the mispricing.1 Indeed, arbitrageurs may even choose to avoid the markets where the mispricing is most severe, because the risks are too great. This is especially true when one is dealing with a large market, such as the Japanese stock market in the late 1980s or the US market for technology stocks in the late 1990s. Arbitrageurs that attempted to short Japanese stocks in mid-1987 and hedge by going long in US stocks were right in the long run, but they lost huge amounts of money in October 1987 when the US market crashed by more than the Japanese market (because of Japanese government intervention). If the arbitrageurs have limited funds, they would be forced to cover their positions just when the relative misvaluations were greatest, resulting in additional buying pressure for Japanese stocks just when they were most overvalued!

This brief introduction to behavioral finance has only touched on a few points. More extensive analysis can be found in Barberis and Thaler (2003), Hirshleifer (2001), Shefrin (2000), and Shiller (2000). It is very difficult to find trading strategies that reliably make money. This does not imply that financial markets are informationally efficient, however. Low-frequency misvaluations may be large, without presenting any opportunity to reliably make money. As an example, individuals or institutions who shorted Japanese stocks in 1987–1988 when they were substantially overvalued, or Taiwanese stocks in early 1989 when they were substantially overvalued, or TMT stocks in the US, Europe, and Hong Kong in early 1999 when they were substantially overvalued, all lost enormous amounts of money as these stocks became even more overvalued. Most of these shortsellers, who were right in the long run, were wiped out before the misvaluations started to disappear. Thus, the forces of arbitrage, which work well for high-frequency events, work very poorly for low-frequency events. Behavioral finance is, relatively speaking, in its infancy. It is not a separate discipline, but instead will increasingly be part of mainstream finance.