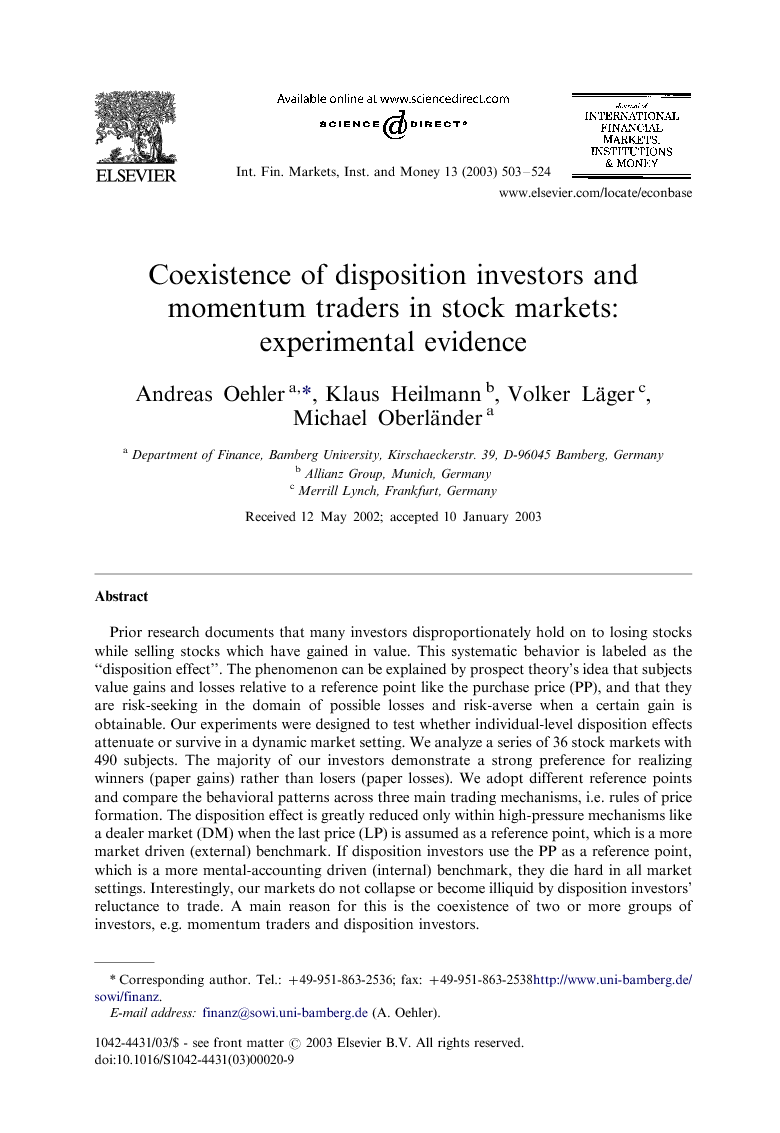 Prior research documents that many investors disproportionately hold on to losing stocks while selling stocks which have gained in value. This systematic behavior is labeled as the “disposition effect”. The phenomenon can be explained by prospect theory's idea that subjects value gains and losses relative to a reference point like the purchase price (PP), and that they are risk-seeking in the domain of possible losses and risk-averse when a certain gain is obtainable. Our experiments were designed to test whether individual-level disposition effects attenuate or survive in a dynamic market setting. We analyze a series of 36 stock markets with 490 subjects. The majority of our investors demonstrate a strong preference for realizing winners (paper gains) rather than losers (paper losses). We adopt different reference points and compare the behavioral patterns across three main trading mechanisms, i.e. rules of price formation. The disposition effect is greatly reduced only within high-pressure mechanisms like a dealer market (DM) when the last price (LP) is assumed as a reference point, which is a more market driven (external) benchmark. If disposition investors use the PP as a reference point, which is a more mental-accounting driven (internal) benchmark, they die hard in all market settings. Interestingly, our markets do not collapse or become illiquid by disposition investors' reluctance to trade. A main reason for this is the coexistence of two or more groups of investors, e.g. momentum traders and disposition investors.

Kahneman and Tversky (1979, p. 287) suggest in their analysis that “…a person who has not made peace with his losses is likely to accept gambles that would be unacceptable to him otherwise”. Staw (1976, p. 27) indicates from his study that “…within investment decision contexts, negative consequences may actually cause decision-makers to increase the commitment of resources and undergo the risk of further negative consequences”. He portrays such escalating commitment as “knee-deep in the big muddy”. Shefrin and Statman (1985, p. 777) extended Kahneman and Tversky, 1979 and Kahneman and Tversky, 1982 general prospect theory to investment decisions to predict that investors have “the disposition to sell winners too early and ride losers too long”. They labeled this behavioral phenomenon which is prompted by the human desire to avoid regret or losses “the disposition effect”. Prior empirical and experimental research give evidence that many investors tend to sell assets that have gained in value (so-called winners) too soon and keep assets that have lost in value (so-called losers) too long, instead of behaving rationally in accordance with the axioms of the expected utility theory. Shefrin and Statman explained the disposition effect by two main features of the prospect theory. First, decision-makers frame their choices in terms of potential gains and losses. Second, people behave as if evaluating the decision consequences on an S-shaped value function, which is concave for gains and convex for losses. This reflects risk aversion in the gain region and risk-seeking in the loss region. Kahneman and Tversky labeled the difference in risk attitude for gains and losses the “reflection effect”. The disposition effect as an individual behavior causes the investment pattern that the number of assets (stocks) intended for sale will be smaller for losers than for winners relative to a specific reference point. Such investment behavior has been well documented in several studies using data from real investors' accounts or experimental questionnaire designs with exogenous prices (not determined by trading actions). However, the authors know of no evidence of a market setting where prices are determined endogenously by an aggregation of demand and supply functions of both rational and disposition investors, i.e. investors who are affected by the disposition effect. The crucial issue is whether the individual-level disposition effect attenuates, or perhaps worsens, by an institutional aggregation like trading in markets. In the literature several arguments exist which may lead to the prediction that individual biases are eliminated on the market level (e.g. financial incentives, learning; see the discussion in Camerer, 1990, p. 128). This means that the market result is unbiased as if investors behave rationally. Our results show that although the disposition bias does not affect all market participants, it does affect the majority. The disposition investors survive in our markets, however, their reluctance to trade does not affect the whole market, and hence liquidity is preserved. A main reason for this is the coexistence of two or more groups of investors, i.e. momentum traders and disposition investors. Empirical studies suffer from the noise in real data and its incompleteness. Neither investors' expectations nor the executed individual decisions can be observed and controlled in markets like the NYSE. Our experiments enable us to observe the whole trading process from the order generation up to the endogenous price formation and order execution on the market level, and the computation of paper gains and paper losses from each investor's account. The paper is organized as follows: Section 2 sheds some light on the previous research, gives a brief theoretical analysis of how the disposition effect should affect trading behavior and derives a set of testable hypotheses that motivate the data analysis. Section 3 describes the experimental design and procedures pertaining to market environments, market institutions, information structure and subjects. Section 4 presents the results and Section 5 concludes.

Our analyses of experimental asset markets show a disposition effect in securities trading. Investors intended to sell more stocks when the price rises than when it falls (Hypothesis 1). The same behavioral pattern occurs more strongly when the price exceeds the PP than when the price is below it (Hypothesis 2). Our findings clearly support the initial results in Shefrin and Statman, 1985, Ferris et al., 1988, Oehler, 1994, Oehler, 1995, Heilmann, 1997, Odean, 1998, Weber and Camerer, 1998 and Grinblatt and Keloharju, 2001. We conclude from these results that markets, particularly high-pressure mechanisms, can reduce disposition effects to some extent when investors use market driven reference points like the LP. On the other hand, disposition investors die hard in all trading regimes when the PP as a more internal benchmark is chosen. Overall, the use of different benchmarks in different groups of investors and/or in different situations, and the fact (see Table 2 and Table 3) that only a proportion of individuals is affected by the disposition effect explains why our markets do not collapse due to the reluctance to trade at losses. As supposed in the theoretical discussion (see Section 2.2) our results additionally document that the selling behavior is influenced by the prior performance or the prior price path. Table 1 shows that after prior gains (“+−” situations) an investor becomes less loss-averse: the prior gains will mitigate subsequent losses, making it more bearable. A greater number of orders and of stocks intended for sale are compared with lost-twice periods (“−−” situations). After a prior loss, a disposition investor becomes more loss-averse. Barberis et al. (2001, p. 2) comment that “…after being burned by the initial loss, he is more sensitive to additional setbacks.” The same arguments apply to gain situations (“−+” versus “++”), where investors become more risk-averse after two consecutive gain periods. These results hold true only for the analysis across subjects. A closer look at Table 2 and Table 3 reveals that a large minority of investors is not affected by the disposition bias. Depending on the trading mechanism, about 40% of the subjects seem to show opposite behavior. So, our findings also shed some light on the relation of our results to analyses of other behavioral-finance phenomena, particularly the trading styles and investment strategies like contrarian and momentum trading as developed in natural settings. The behavior of our disposition investors (d>0) can be explained as the behavior of contrarians, i.e. selling winners and buying losers. The non-disposition investors (d<0) may be characterized as momentum traders. A disposition investor acts as a contrarian when she sells winner stocks and buys losers to lower the weighted average of her PP. This enables her to close the mental-account of a stock more probably not at a loss. She has a stronger bias towards breaking even after prior losses, a behavior contrary to the house-money effect. To shed some more light upon the interaction of the investors with different biases in the dynamic market setting, we analyze the behavioral patterns systematically. Assume that for every positive or negative price change in the past a contrarian or a momentum behavior is possible18 and that the individual behavior potentially differs between an upside and a downside trend, then four kinds of investment pattern occur: consistent behavior in upside and downside markets (i.e. pure contrarian and pure momentum trading) and mixed patterns. We calculate the trading patterns for every individual subject and for all last-price movements based on the order volume (No. of stocks) of all buying and selling orders. This method is equivalent to the calculation documented in Section 4.2 and the last two columns in Table 2 (sell orders).where Kj+=number of stocks intended for a buy by participant j in the domain of gains, Vj+=number of stocks intended for sale by participant j in the domain of gains, Kj−=number of stocks intended for a buy by participant j in the domain of losses and Vj−=number of stocks intended for sale by participant j in the domain of losses. If the b-value is negative in the region of gains (i.e. b+<0) and positive in the region of losses (i.e. b−>0), the subject acts like a contrarian investor. The reverse holds true for a momentum trader (b+>0, b−<0). Remember that the behavior of a disposition investor is quite similar to contrarian behavior in the domain of gains and of losses, but only observed for the sell side of the market. Our results show evidence that all four trading patterns coexist in one market. In CMs19 about 26% of the investors reveal pure contrarian trading and about 10% exhibit pure momentum trading. Most of the subjects (46%) act as a contrarian in the region of gains and as a momentum trader in the domain of losses. The remaining 18% show the reverse pattern. It has to be considered that the disposition pattern is isolated from both, the (26+46%=) 72% tracking on positive price changes (sell orders dominate buy orders) and the (26+18%=) 44% tracking on negative price changes (buy orders dominate sell orders). Our study ends with the ritual cry for further research. Sharpening the link between the empirical investigations on behavioral-finance phenomena and the power of experimental markets could be an interesting topic. It is worth separating more clearly the valuation procedures on which the disposition effect is based and the framing or perception effects of consecutive price formations. It also seems worth having a more detailed look at the process, which drives benchmark building and how it can be affected by perception and valuation effects known from Kahneman and Tversky's prospect theory.