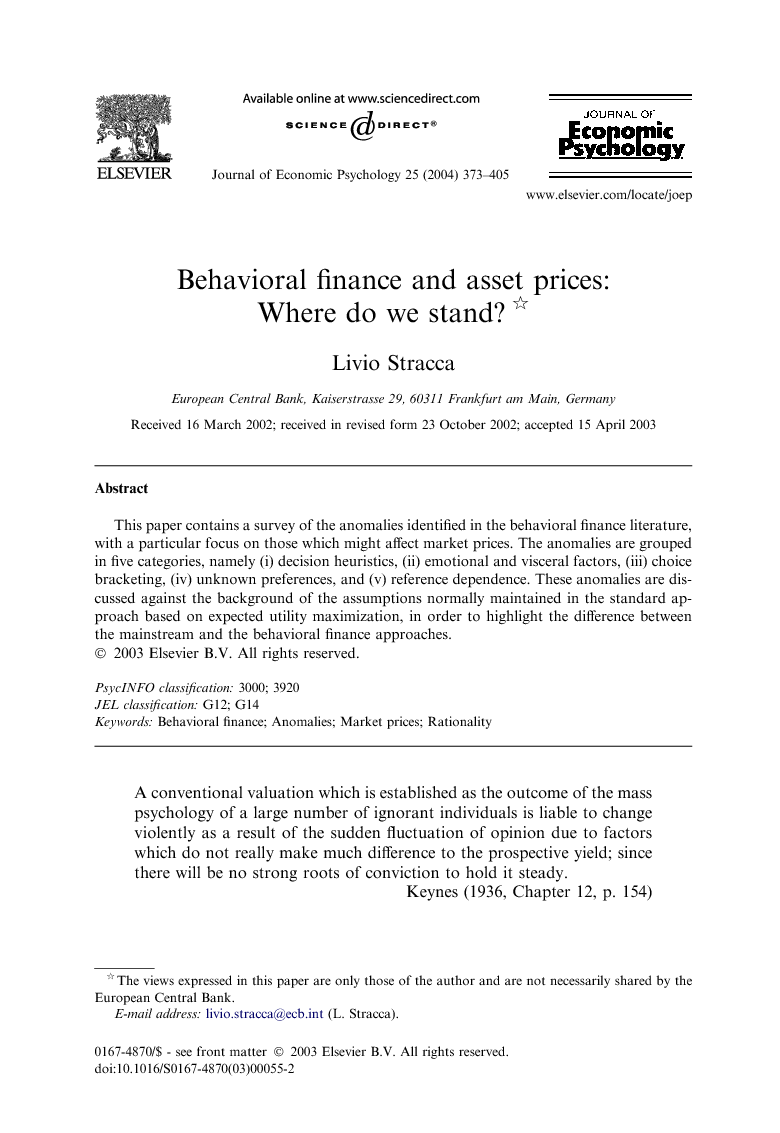 This paper contains a survey of the anomalies identified in the behavioral finance literature, with a particular focus on those which might affect market prices. The anomalies are grouped in five categories, namely (i) decision heuristics, (ii) emotional and visceral factors, (iii) choice bracketing, (iv) unknown preferences, and (v) reference dependence. These anomalies are discussed against the background of the assumptions normally maintained in the standard approach based on expected utility maximization, in order to highlight the difference between the mainstream and the behavioral finance approaches.

Behavioral economics and finance is one of the most dynamic and promising fields of economic research by its scope and size. There is an increasingly long list of phenomena which, while inexplicable with the standard tools and approaches of mainstream economics, have found a satisfactory explanation in behavioral economics and finance.1 Nonetheless, it is far from being a foregone conclusion that the behavioral methodology will come to dominate economic research and completely supplant the mainstream approach based on expected utility maximization and rationality, and opposing views have been expressed in this respect (in the behavioral camp, see Thaler, 2000, and Colisk, 1996; on the mainstream side, see for example Fama, 1998, and Rubinstein, 2000). This paper selectively touches upon recent contributions in the behavioral finance literature. The objective of this review is to provide an answer to two key issues, namely: • What are the most important and systematic behavioral biases which characterize economic agents that we know of? • Are they relevant to explain aggregate market behavior, namely do they affect aggregate prices and competitive markets? Behavioral finance rejects a vision of economic agents' behavior based on the maximization of expected utility. At the root of this rejection is the overwhelming evidence available that agents, both in controlled experiments and in real life situations, behave in a way so as to violate the axioms of expected utility (Starmer, 2000). It should be emphasized that the focus of behavioral finance is on a positive description of human behavior especially under risk and uncertainty, rather than on a normative analysis of behavior which is more typical of the mainstream approach. One of the key objectives of behavioral finance is to understand systematic market implications of agents' psychological traits. The stress on the market implications is very important because the analysis of large, competitive markets with a low level of strategic interaction is at the heart of economics (Mas-Colell, 1999). So far, the behavioral finance literature has not reached a level of maturity which would allow it to provide a coherent, unified theory of human behavior in market contexts in the same way expected utility and mainstream economics and finance have done.2 Nevertheless, cumulative prospect theory introduced by Starmer and Sugden (1989) and Tversky and Kahneman (1992) is approaching a point where it can represent a unified theory of behavior of agents under risk which is alternative, and possibly (in some contexts) superior, to expected utility. This paper will be structured as follows. The next section will provide a framework of analysis which will serve as a basis for categorizing and interpreting the contributions in the literature. Section 3 provides the reader with a bird's eye view of the main “anomalies” identified in the behavioral finance literature. Section 4 summarizes and puts into perspective the debate between mainstream and behavioral finance theorists on the rationality (or lack thereof) of the market. Finally, Section 5 contains some suggestions for further research and some concluding remarks.

Behavioral finance is a rapidly growing area of research and one of the most promising fields of economics. The fertilization of finance (and economics in general) with psychological ideas and evidence makes it a very interesting and lively field. At the same time, it could be argued that behavioral finance is running the risk of being unparsimonious (Tirole, 2002; Wachter, 2002). While the list of anomalies discovered is now impressive, convincing evidence is still to be provided that expected utility is a flawed analytical framework for studying the behavior of agents in a (financial) market context, which is at the core of economics (Constantinides, 2002).48 Bulletproof evidence that the market is not rational in the mainstream finance, beat-the-market sense is yet to be provided, although many hints that the market may not be rational in other reasonable senses have indeed been provided. Against this background, the key challenge for behavioral finance seems to be to study in more detail the market implications of the widely documented agents' behavioral biases. In particular, to study how prices are determined in large competitive markets more recourse to social, rather than individual psychology might be warranted. The work on synchronization of expectations, fads and the role of communication (see, e.g., Shiller, 2000a and Shiller, 2000b) seems to be most promising in this respect. In addition, a more thorough analysis of the possible definitions of market rationality which would be relevant from a welfare perspective would be greatly beneficial. Does it support social welfare that it is impossible to beat the market? Does it hamper welfare that a large stock market can fall by 20% in a matter of hours without any news? Is market volatility due to arbitrary beliefs good or bad?49 The answers to these questions are likely to shed some light on the relative usefulness of behavioral and mainstream finance. Indeed, the two approaches need not be seen necessarily as antagonists. Both may well be useful in explaining part of reality, depending on the problem under investigation. Behavioral finance is a more suitable approach to explain endogenous market fluctuations and the formation of market beliefs and fads, while the mainstream approach may be preferable to study issues more closely related to the rational expectations assumption for given market beliefs, for example the pricing of derivatives. If this line of reasoning is appropriate, the relevance of each approach will depend crucially on whether the fact that behavioral biases distort asset prices in large and competitive markets has a significant implication on the quality of the allocation of capital and ultimately on long-term economic growth and welfare, namely on the economic efficiency of financial market prices. The issue of the feedback mechanism seems most relevant in this respect. Thus far, there has been no systematic attempt to address the issue of the feedback from market prices to fundamentals, and only some informal speculations have been provided (see Daniel et al., 2002; Shiller, 2000a). Finally, one further intriguing area of research is represented by the study of possible behavioral biases of large actors such as policy-makers (for example central bankers; see al-Nowaihi & Stracca, 2003). Because of their size and role, these actors have a direct influence on financial markets and their alleged behavioral biases may certainly have repercussions on market outcomes. In addition, learning and evolutionary forces are deemed to apply less forcefully than for atomistic agents participating in a large, competitive market. However, an analysis of the systematic psychological traits of economic policy-makers is yet to be developed, and represents a challenge for future research.