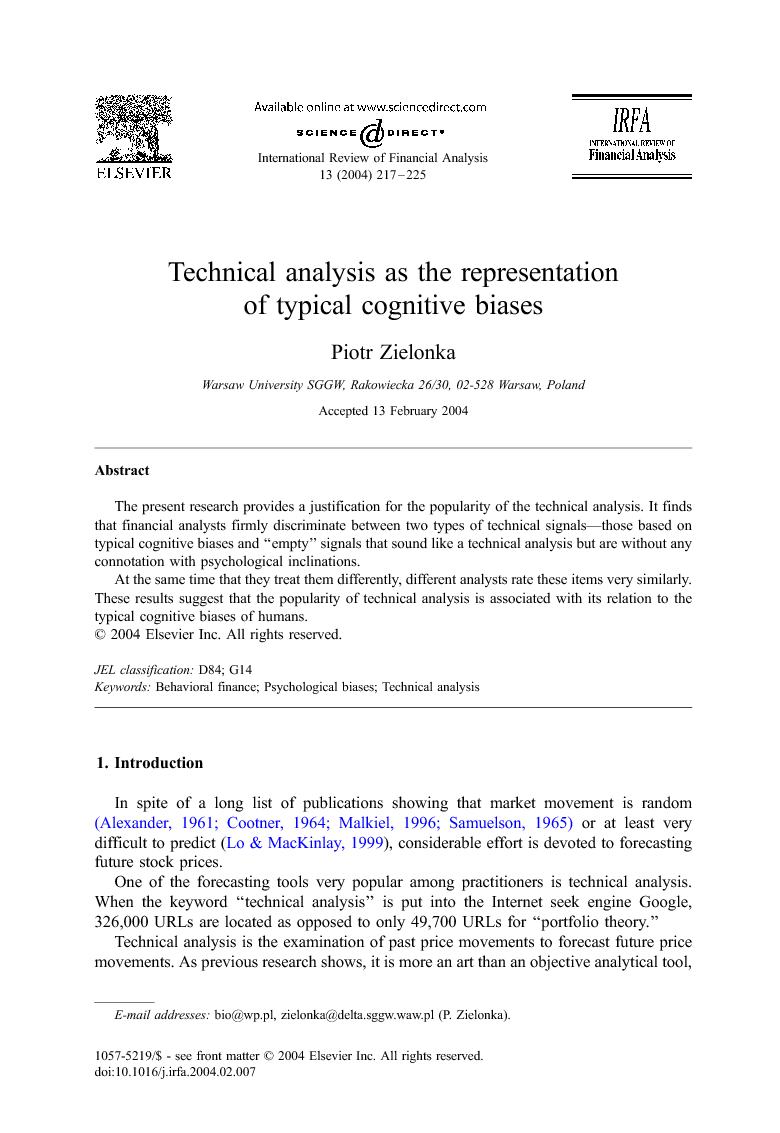 The present research provides a justification for the popularity of the technical analysis. It finds that financial analysts firmly discriminate between two types of technical signals—those based on typical cognitive biases and “empty” signals that sound like a technical analysis but are without any connotation with psychological inclinations. At the same time that they treat them differently, different analysts rate these items very similarly. These results suggest that the popularity of technical analysis is associated with its relation to the typical cognitive biases of humans.

In spite of a long list of publications showing that market movement is random Alexander, 1961, Cootner, 1964, Malkiel, 1996 and Samuelson, 1965 or at least very difficult to predict (Lo & MacKinlay, 1999), considerable effort is devoted to forecasting future stock prices. One of the forecasting tools very popular among practitioners is technical analysis. When the keyword “technical analysis” is put into the Internet seek engine Google, 326,000 URLs are located as opposed to only 49,700 URLs for “portfolio theory.” Technical analysis is the examination of past price movements to forecast future price movements. As previous research shows, it is more an art than an objective analytical tool, and its efficiency has not been proven Fama & Blume, 1966 and Jensen & Bennington, 1970. Technical analysis is open to interpretation. Many times, two technicians will look at the same chart and paint two different scenarios or see two different patterns, and both would be able to come up with logical support to justify their positions. Moreover, technical analysts' opinions are often extremely ambiguous, like “the stock seems positioned to break through resistance at US$65, but a stop loss should be placed at US$54.” In addition, even if stock prices completely followed a random walk, people would be able to convince themselves that there are patterns having predictive value. In laboratory experiments, subjects are reported to have found patterns in purely random sequences of stock prices Roberts, 1959 and Warneryd, 2001. An extensive body of research examining the efficiency of technical analysis on the Polish stock market has shown negative results. No efficient technical analysis tools were found (Janiec, 2000); neither was there any evidence showing that any replicable technical scheme works for an extended period of time. The following fundamental question arises: if there is no evidence that technical analysis can result in exceptional profits, why is it so popular? Since technical analysis started at the beginning of the 20th century when the possibilities of testing its efficiency were very limited, it has become more and more popular, as it offers an unlimited set of tools and signals and seems to be an interesting method of market analysis. However, recent studies since the 1950s have shown that its efficiency is very low. So why does technical analysis still remain so popular? The first answer may be related to tradition and education. Investors have used it for over a century, and new market participants learn it from more advanced market participants. The second answer is related to some common cognitive biases that affect people's behavior. It has been proven that stock prices approximately follow a random walk pattern most of the time, and psychologists have described a number of ways in which people deal with randomness. Additionally, market participants may be subject to herd behavior. Perhaps these psychological mechanisms are the invisible fundamentals of technical analysis. Below is a list of four common psychological inclinations affecting stock market participants: 1. The gambler's fallacy is observed in a casino, where after a long run of red, the roulette player is inclined to believe that black will be next. In financial markets, the gambler's fallacy manifests itself in predicting a trend reversal. If a trend continuation is predicted, then the behavior is called antiregressive (Wagenaar, 1988). 2. Misperception of regression to the mean disregards the statistical fact that in a long series of a chance process, extreme values are likely to be followed by less extreme values (Tversky, 1974). In financial markets, the misperception of regression to the mean manifests itself in predicting a trend continuation. 3. The anchoring effect shows that most people initially tend to base their estimations or assessment of information on a first source of reference value (anchor) and subsequently adapt this to the real value. Empirical research shows that the adjustment process is regularly cut short and is incomplete. The original value (anchor) is afforded too much weight Goldberg & Nitzsch, 2001, Slovic & Lichtenstein, 1971 and Tversky & Kahneman, 1971. Investors overestimate the importance of a recently quoted or otherwise significant stock price. This price may then serve as an anchor for further probability assessments. 4. Herd behavior reflects the immense power of social pressure on individual judgment (Asch, 1952). Many people accept the perceived authority of others on stock market valuation and stop trusting their own judgments if the majority of market participants hold a different opinion. The present research was designed to determine if technical analysis signals are associated with some common cognitive biases. A questionnaire was administered to 24 Polish financial analysts, and there were three groups of items within the questionnaire: □ regular technical analysis signals representing four common psychological biases; □ technical-like signals created by the author of the questionnaire, representing the same four biases; and □ technical-like signals also created by the author of the questionnaire, not representing any psychological biases. Hypothesis 1. A majority of the financial analysts will highly rate signals belonging to the first and the second groups and will assign no predictive value to the signals from the third group. If Hypothesis 1 is supported, then it can be concluded that some technical analysis signals represent common cognitive biases, and this may be responsible for the great popularity of technical analysis. Hypothesis 2. A majority of the financial analysts will agree on the impact of particular items for future stock prices. If this hypothesis is supported, then it can be concluded that the analysts are subject to some psychological biases, inasmuch as they agree on the predictive value of unproven measures.