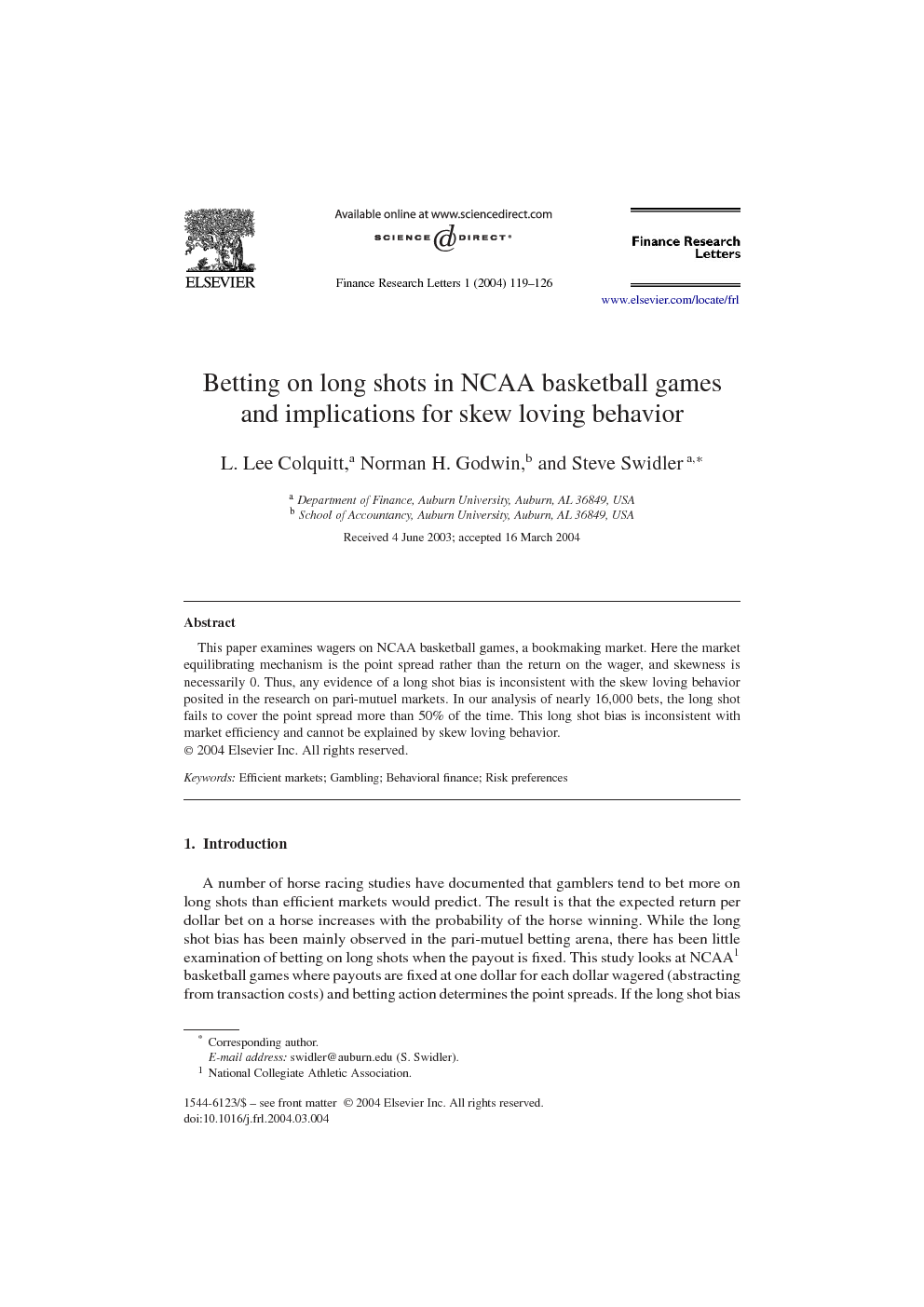 This paper examines wagers on NCAA basketball games, a bookmaking market. Here the market equilibrating mechanism is the point spread rather than the return on the wager, and skewness is necessarily 0. Thus, any evidence of a long shot bias is inconsistent with the skew loving behavior posited in the research on pari-mutuel markets. In our analysis of nearly 16,000 bets, the long shot fails to cover the point spread more than 50% of the time. This long shot bias is inconsistent with market efficiency and cannot be explained by skew loving behavior.

A number of horse racing studies have documented that gamblers tend to bet more on long shots than efficient markets would predict. The result is that the expected return per dollar bet on a horse increases with the probability of the horse winning. While the long shot bias has been mainly observed in the pari-mutuel betting arena, there has been little examination of betting on long shots when the payout is fixed. This study looks at NCAA1 basketball games where payouts are fixed at one dollar for each dollar wagered (abstracting from transaction costs) and betting action determines the point spreads. If the long shot bias exists, then excessive betting on the underdog will cause point spreads to be smaller than the mean of the games' outcomes. Empirical studies of horse races typically find that for low probability, high variance bets (i.e., long shots), the subjective odds set in the pari-mutuel market are lower than the objective odds calculated from the actual finishes. A number of researchers suggest that the long shot bias is the result of risk-loving behavior (see Weitzman, 1965, Ali, 1977 and Quandt, 1986, and Kanto et al., 1992). Prospect theory is another possible explanation for the long shot bias. In prospect theory, Kahneman and Tversky (1979) posit that people place too large a weight on small probabilities when estimating expected utility. Golec and Tamarkin (1998) provide yet another explanation for the long shot bias. They show that the data are consistent with risk aversion if one considers skewness of betting returns.2 Analysis in the Golec and Tamarkin paper rests on the assumption that variance and skewness increase as a horse's objective win probability decreases. Thus, when wagering on long shots, the utility from positive skewness outweighs the disutility from negative expected return and high variance. This explanation rests on the fact that in pari-mutuel markets, the return distribution for wagering on long shots is highly asymmetrical. If, however, point spreads serve as the price setting mechanism and the wager is perceived to be a fair game (abstracting from transaction costs), skewness is necessarily zero. In these markets, evidence of a long shot bias would not be the result of skew loving behavior. Thus, examining NCAA basketball game wagers provides a twofold test of previous gambling hypotheses concerning the long shot bias found in pari-mutuel markets. First, we investigate the betting line's forecast of the actual point spread, and second, we consider the number of times the long shot beats the betting line. Any evidence of a long shot bias in the NCAA basketball bookmaking market cannot be explained by the skew loving behavior posited by Golec and Tamarkin. Sports book wagering has the additional feature that it is a competitive market, an important quality when trying to examine issues of efficiency. According to the National Gambling Impact Study Commission Report (James, 1999), there are 142 legal sports books in Nevada that allow wagering on amateur sports. This is in addition to the 53 sports books that existed on the World Wide Web in 1998. While the exact dollar amount bet on NCAA basketball is difficult to measure, the Study's estimate for total sports book wagering in 1998 includes $2.3 billion in Nevada, $651 million on the Internet, and an additional $80 to $380 billion of illegal sports betting.

Studies of pari-mutuel wagering find a long shot bias that is in violation of market efficiency. One possible explanation for this result is that gamblers value skewness and the utility from the highly skewed returns of long shots more than offsets transaction costs and the disutility from risk as measured by variance. In contrast to pari-mutuel markets, NCAA basketball is a bookmaking market. Here the market equilibrating mechanism is the point spread rather than the return on the wager, and returns are symmetrical. If the book is evenly matched, and abstracting from transaction costs, it necessarily follows that return distribution skewness is 0. Thus, any evidence of a long shot bias is inconsistent with the skew loving behavior posited in the research on horse racing. Analysis of nearly 16,000 bets finds that in games where one team is heavily favored, the long shot fails to cover the point spread more than 50% of the time. In games where the visiting team is the heavy favorite, the results are significant at the 1% level. Thus, while skewness is a sufficient condition for the long shot bias to exist, evidence in the book making market shows that it is not a necessary condition. An explanation for the long shot bias in NCAA basketball wagers remains for future research in this area. One possibility consistent with our evidence is that the larger dispersion in forecast errors indicates a market with relatively low information content. Individuals thinking that they may be able to exploit informational inefficiencies are drawn to these games. In turn, the long shot bias will obtain if prospect theory holds and individuals overbet teams that have small probabilities of winning.