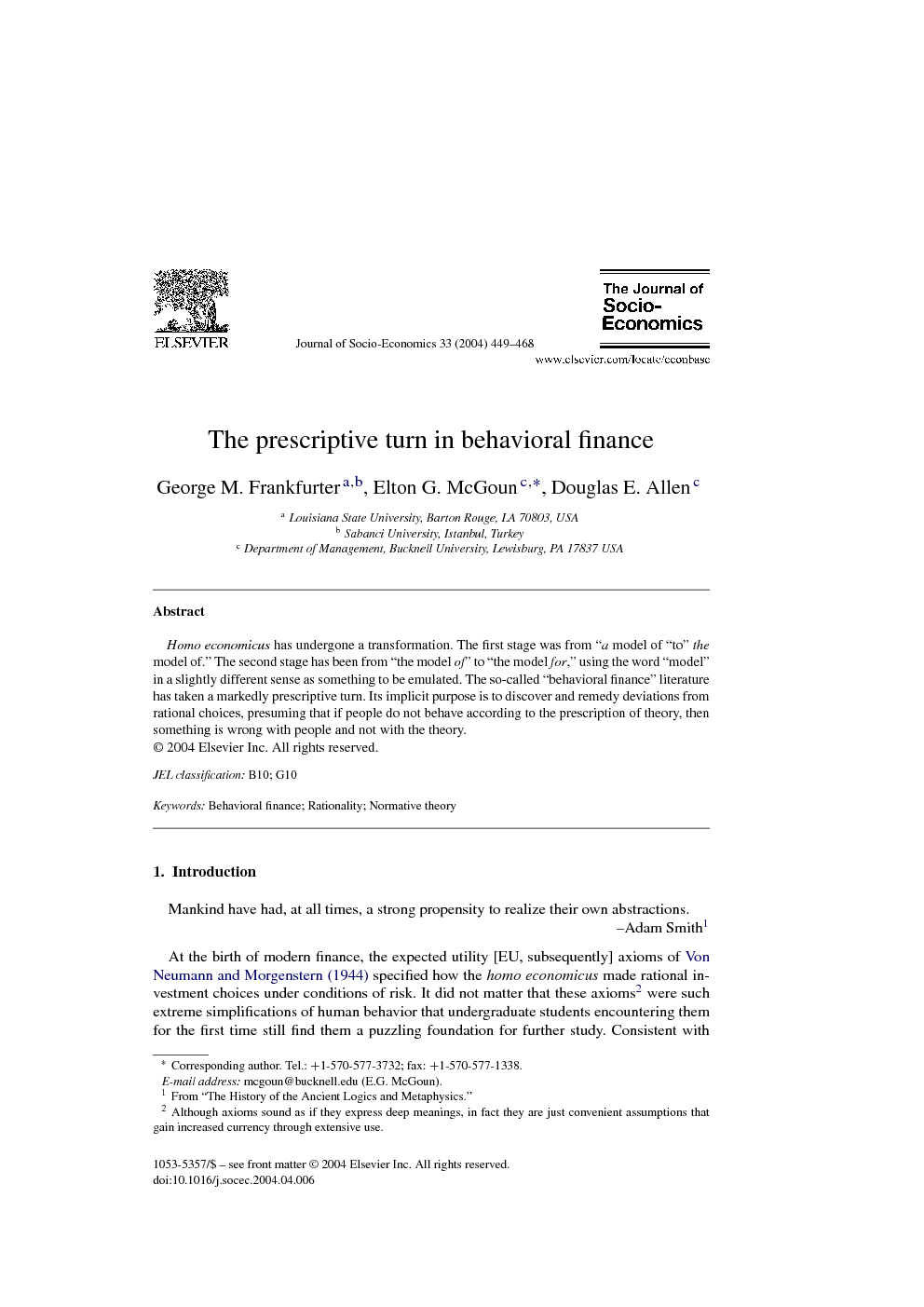 Homo economicus has undergone a transformation. The first stage was from “a model of “to” the model of.” The second stage has been from “the model of” to “the model for,” using the word “model” in a slightly different sense as something to be emulated. The so-called “behavioral finance” literature has taken a markedly prescriptive turn. Its implicit purpose is to discover and remedy deviations from rational choices, presuming that if people do not behave according to the prescription of theory, then something is wrong with people and not with the theory.

At the birth of modern finance, the expected utility [EU, subsequently] axioms of Von Neumann and Morgenstern (1944) specified how the homo economicus made rational investment choices under conditions of risk. It did not matter that these axioms2 were such extreme simplifications of human behavior that undergraduate students encountering them for the first time still find them a puzzling foundation for further study. Consistent with Friedman’s (1953) doctrine of positive economic methodology, “wildly unrealistic” assumptions were necessary for casting complex economic phenomena in manageable terms for theory construction. Should the theories built upon such simplifications fail empirical testing then the assumptions would be replaced by others (possibly, but not necessarily, more realistic) until the resulting theories provided “… sufficiently good ‘approximation’ for the purpose at hand” (ibid., p. 15). No one ever argued, however, that there either was or should be such a person as the homo economicus. He was a methodological convenience and a tolerated myth. As finance as an academic discipline transformed itself into modern finance and then into financial economics, as it is often called, Von Neumann and Morgenstern’s species of the homo economicus, in Friedman’s new interpretation, underwent a character transformation. The first stage of this transformation was from “a model of” to “the model of.” For most of its roughly 50-year life, financial economics has been a search for explanations grounded in the EU axioms, as if the financial system were the outcome of a teleological evolutionary process that has necessarily led to emergence of the homo economicus, and as if the task of finance research were to discover how the finance practice we observe is a consequence of rational choices based upon EU. Thus, the homo economicus is no longer just a methodological convenience for modeling the economic behavior of individuals and of personified markets and institutions. He is someone who must exist within us and whom financial economists must find. The second stage of the transformation has been from “the model of” to “the model for,” using the word “model” in a slightly different sense as something to be emulated. Within the past 10–15 years, numerous empirical anomalies have arisen in finance that have defied extensive efforts to explain financial decision making by individuals (often referred to as agents) as economically rational choices. One response to this failure has been the advent of behavioral finance (BF, subsequently), recently labeled the “anomalies literature,” (Fama, 1998) that attempts to build theories on the results of psychological research concerning how people do, in fact, make choices under uncertain conditions. At first glance, this is perfectly consistent with the original concept of the behavior of the homo economicus as a methodological convenience to be supplanted by more realistic behavioral assumptions. But the BF literature has taken a marked prescriptive turn, its purpose being to discover and remedy deviations from the EU axioms of rational choice. The thinking appears to be that if people do not behave according to the prescriptions of theory, then something is wrong with people and not with the theory. Thus, “irrational” human behavior must be modified. The following five sections of this paper chart the transformation of the homo economicus in finance. First, it was a useful simplification with a long history (Section 1) but clearly a fiction (Section 2). Then it became the foundation of modern finance as a necessity that must be there (Section 3). Now it is becoming an ideal that ought to be there (Section 4). There is a massive literature of commentary on and criticism of the homo economicus. All the same, few have addressed the question why not just the orthodox practitioners of financial economics, but even its most profound and prominent critics, have insisted upon this single-minded artificial construct of human nature as the sole foundation for scientific inquiry. And none have addressed the question why, when the limitations of the model have become too obvious to ignore, finance is insisting upon changing humanity to conform to it. In Section 5 we discuss the meaning of this firm and fatal attraction of financial economics to a fiction.