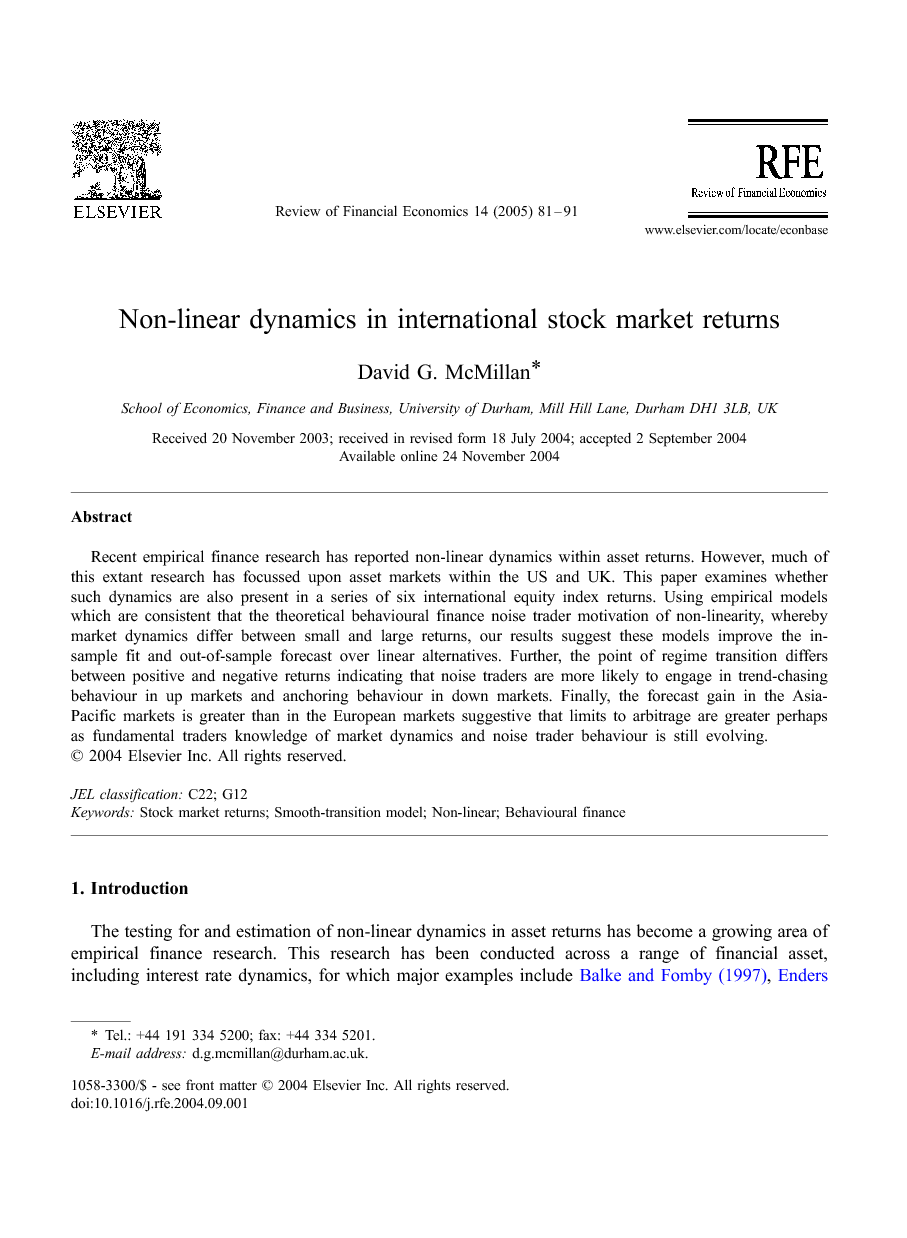 Recent empirical finance research has reported non-linear dynamics within asset returns. However, much of this extant research has focussed upon asset markets within the US and UK. This paper examines whether such dynamics are also present in a series of six international equity index returns. Using empirical models which are consistent that the theoretical behavioural finance noise trader motivation of non-linearity, whereby market dynamics differ between small and large returns, our results suggest these models improve the in-sample fit and out-of-sample forecast over linear alternatives. Further, the point of regime transition differs between positive and negative returns indicating that noise traders are more likely to engage in trend-chasing behaviour in up markets and anchoring behaviour in down markets. Finally, the forecast gain in the Asia-Pacific markets is greater than in the European markets suggestive that limits to arbitrage are greater perhaps as fundamental traders knowledge of market dynamics and noise trader behaviour is still evolving.

The testing for and estimation of non-linear dynamics in asset returns has become a growing area of empirical finance research. This research has been conducted across a range of financial asset, including interest rate dynamics, for which major examples include Balke and Fomby (1997), Enders and Granger (1998) and Enders and Siklos (2001); exchange rate dynamics, Krägler and Krugler (1993), Obstfeld and Taylor (1997), and Coakley and Fuertes (2001); and equity returns, Martens, Kofman and Vorst (1998), Perez-Quiros and Timmermann (2000), McMillan, 2001 and McMillan, 2003 and Maasoumi and Racine (2002). Whilst several rationales exist for the presence of such non-linear dynamics within asset returns, perhaps the most promising theoretical developments concern the interaction between heterogenous agents, namely noise traders and fundamental, or arbitrage traders, and the presence of transactions costs and other markets frictions.1 The existence of noise trading means that profitable opportunities will inevitably arise for privately informed and arbitrage traders.2 In an early development of this line of research, Cootner (1962) argued that the activities of noise traders will cause prices to hit upper or lower ‘reflecting barriers’ around an equilibrium, which would subsequently trigger arbitrage activities by informed traders who push prices back to equilibrium. Cootner argued further that the position of such barriers is likely to depend upon the size of market frictions and other transactions costs, including the bid-ask spread, short-selling and borrowing constraints, giving rise to a band of price movements around the equilibrium price. Thus, informed traders only actively trade when deviations from equilibrium are sufficiently large to make arbitrage trade profitable (He & Modest, 1995). Similarly, models of international goods market arbitrage examined by Dumas, 1992 and Dumas, 1994 and Sercu, Uppal and Van Hulle (1995) have suggested that the presence of transactions cost which result in small imbalances being left uncorrected may impart non-linear adjustment to equilibrium due to non-linear factors affecting the costs of arbitrage, such that the speed of reversion to equilibrium increases with the size of the deviation. Furthermore, the recent ‘behavioural finance’ literature with its focus upon the attendant risks associated in interacting with noise traders has developed models of non-linear behaviour which do not require the presence of transactions costs. This literature has focussed upon deviations from fundamental value due to investor cognitive biases and subsequent limits to arbitrage.3 More specifically, arbitrageurs actions may be limited until returns, of either sign, become sufficiently extreme to allow arbitrageurs to engage in profitable reversion trading strategies. This line of enquiry suggests that noise traders typically engage in momentum trading (or trend-chasing) which leads, in the short-run, to a market over-reaction following the arrival of news, such that changes in returns will exceed that required by the news, but with the result that, in the long-run, there will be a subsequent reversion (Barberis et al., 1998, Daniel et al., 1998 and Hong & Stein, 1999).4 However, despite this movement away from fundamental value arbitrage, or fundamental, traders, do not act immediately due to the possibility of ‘mis-price deepening’ (Shleifer, 2000). That is, where noise traders' beliefs become even more extreme before they are subject to correction, this providing a source of risk to be faced by arbitrageurs particularly if they are subject to a short horizon.5 Hence, the risk of a further movement of noise traders' opinion away from the fundamental equilibrium must be borne in mind by arbitrageurs and may limit their willingness to take a contrary position to noise traders. That is, if noise traders are pessimistic today about an asset and have thereby driven its return down, an arbitrageur buying this asset needs to recognise that noise traders might become even more pessimistic and drive returns down even further in the near future; if the arbitrageur has to liquidate their position before returns recovers, they will suffer a loss, and fear of this loss could limit the original arbitrage position. Conversely, an arbitrageur selling an asset short when bullish noise traders have driven its return up needs to be aware that noise traders might become even more bullish tomorrow, and so must take a position that accounts for the risk of a further rises when they have to buy back the asset.6 Overall, these models suggest that the dynamic behaviour of returns will differ according to the size of the deviation in returns, thus giving rise to non-linear dynamics for returns of differing size. Thus, we apply a model capable of capturing these dynamics to international stock index returns. Moreover, the vast majority of the extant research has only considered non-linear dynamics within US and UK asset returns, although some notable exceptions to this include van Dijk and Franses (2000), Leung, Daouk and Chen (2000) and Shively (2003), hence this work provides a further insight into the generality of non-linear dynamics within asset returns and of the theoretical models which generate these dynamics. To this end, we consider stock market returns data for France, Germany, Hong Kong, Japan, Malaysia and Singapore, which we believe provides a good cross-section of developed and emerging economies, and apply a variant of the exponential smooth-transition autoregressive model (Chan & Tong, 1986, Granger & Teräsvirta, 1993, Teräsvirta, 1994 and Teräsvirta & Anderson, 1992), namely the quadratic-logistic smooth-transition model (Jansen & Teräsvirta, 1996). This model is capable of capturing behaviour consistent with the above noise trader models, where market dynamics differ between large and small returns. The remainder of this paper is organised as follows, Section 2 outlines the smooth-transition model, Section 3 presents the empirical results and model specification and evaluation tests and Section 4 provides a summary and concludes our findings.

The search for non-linear predictability of asset returns has become an increasing area of research activity, with several papers suggesting that such models may out-perform linear models both with regard to their in-sample fit and out-of-sample forecasting performance. However, much of this extant work has focussed upon the financial markets of the US and UK. Further, whilst there exists several theoretical models pertaining to explain this non-linear relationship, one of the most promising explanations comes from the interaction of noise and arbitrage traders where cognitive biases and limits to arbitrage could result in non-linear dynamics such that the deviation from fundamental equilibrium has to be sufficiently large before arbitrageurs actively engage in the market. That is, small and large returns may exhibit differing dynamics as the existence of noise trader risk imparts bands of inactivity around fundamental equilibrium. This paper presents evidence of such a non-linear relationship for several international index returns. More specifically, we consider the major index returns of France, Germany, Hong Kong, Japan, Malaysia and Singapore, using both linear and QLSTAR non-linear models. The non-linear model is able to capture the behaviour implied by the theoretical models of noise traders and allows for a differing point of regime transition between positive and negative returns. The results show that overall the non-linear model out-performs the linear model on the basis of in-sample fit and out-of-sample forecast measures. These results support the noise trader models where arbitrage is limited due to the attendant noise trader risks such that a band of inactivity around equilibrium develops for which arbitrageurs require the return to exceed before actively trading. Further, the magnitude of returns beyond which they must change before arbitrage, or fundamental, trading takes place is not symmetric for positive and negative returns. Specifically, arbitrage trading takes place sooner for negative deviations than for positive deviations; this suggests that limits to arbitrage are more in force during up markets, this may to due to greater noise trader confidence and trend-chasing in up markets combined with more conservatism and anchoring (maintaining prior beliefs) in down markets. Finally, the gain in in-sample fit and out-of-sample forecasting power is markedly greater for the Asia-Pacific economies than for the European economies, this may arise due to greater limits to arbitrage in these markets as fundamental traders knowledge about the economy and its effects on equity and other financial asset markets is still evolving, but is an area of research that requires further attention.