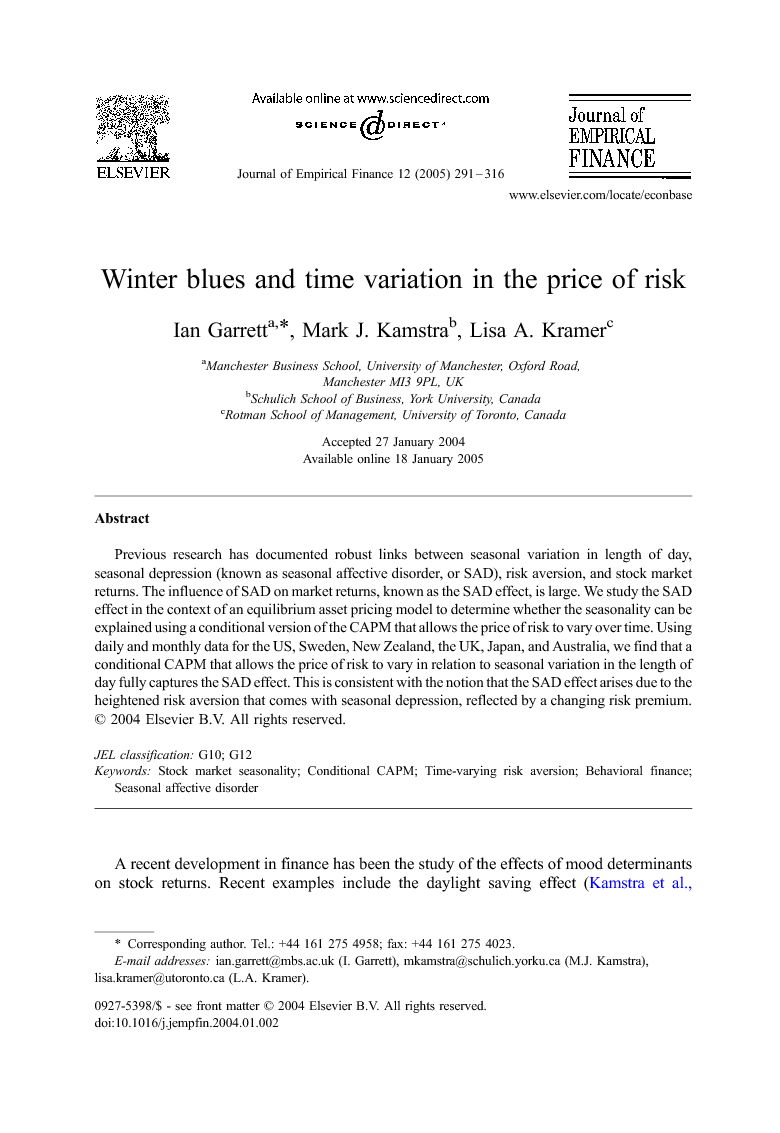 Previous research has documented robust links between seasonal variation in length of day, seasonal depression (known as seasonal affective disorder, or SAD), risk aversion, and stock market returns. The influence of SAD on market returns, known as the SAD effect, is large. We study the SAD effect in the context of an equilibrium asset pricing model to determine whether the seasonality can be explained using a conditional version of the CAPM that allows the price of risk to vary over time. Using daily and monthly data for the US, Sweden, New Zealand, the UK, Japan, and Australia, we find that a conditional CAPM that allows the price of risk to vary in relation to seasonal variation in the length of day fully captures the SAD effect. This is consistent with the notion that the SAD effect arises due to the heightened risk aversion that comes with seasonal depression, reflected by a changing risk premium.

A recent development in finance has been the study of the effects of mood determinants on stock returns. Recent examples include the daylight saving effect (Kamstra et al., 2000), whereby returns following sleep disruptions on daylightsaving weekends are large and negative; the sunshine effect (Saunders, 1993 and Hirshleifer and Shumway, 2003), where sunshine is significantly correlated with daily stock returns; and the seasonal affective disorder (SAD) effect (Kamstra et al., 2003) where seasonal variation in stock returns is linked to depression caused by reduced length of day in the fall and winter. An interesting question is whether such effects can be explained by a conditional asset pricing model which allows the risk premium to vary over time. In this paper, we focus on one case in particular, the SAD effect. There are two good reasons for doing so. First, Kamstra, Kramer, and Levi (2003, henceforth KKL) document that the SAD effect is very robust.1 Even after controlling for environmental effects such as sunshine, temperature and rainfall, and other well-known seasonals such as the tax-loss selling effect, there is still a very strong and significant SAD seasonal in stock returns whereby returns move in concert with length of day in both the Northern and Southern Hemispheres. This suggests the effect is worthy of further investigation. Second, experimental evidence from the psychology literature documents that depression such as that caused by SAD lowers the propensity for risk-taking.2 Seasonal affective disorder and its less severe manifestation, the so-called winter blues, are clinical conditions in which sufferers experience depression during seasons of the year that have shorter daylight hours.3 Given the link between depression and risk-taking, the SAD effect in stock returns may be captured by time variation in the risk premium in the context of an asset pricing model. This is the question we investigate in this paper. Using both daily and monthly data, we confirm that there is a significant SAD effect in the stock markets we consider, including the US, Sweden, New Zealand, the UK, Japan, and Australia. If the SAD effect is related to time-varying risk premia, an asset pricing model that allows for time variation in the price of risk should be able to control for its presence. Following Bekaert and Harvey (1995), we investigate this possibility using a conditional version of the CAPM that allows the price of risk to vary over time. We find that allowing for a time-varying risk premium entirely accounts for the SAD effect in market returns. The rest of the paper is organized as follows. The next section discusses seasonal affective disorder and how we measure its impact. Section 2 describes the data we use and documents the presence of the SAD effect in the markets we consider. In Section 3, we use a version of the conditional CAPM similar to that used by Bekaert and Harvey (1995) to show time variation in the risk premium is capable of explaining the SAD effect. Section 4 offers some concluding remarks.

The association between seasonal variation in daylight and depression is known to medical practitioners as seasonal affective disorder, or SAD. Studies in psychology have shown that depressed individuals, such as those afflicted with SAD, experience heightened risk aversion. We build on past research in finance which documents a link between the depression (and hence increased risk aversion) individuals experience as a consequence of SAD and the seasonalities that are observed in international stock market returns. We explore the link between seasonal depression and market returns, known as the SAD effect, in the context of a conditional CAPM framework. We study stock market returns at daily and monthly frequencies for several countries: the US, Japan, the UK, and Sweden in the Northern Hemisphere, and New Zealand and Australia in the Southern Hemisphere (where the patterns of daylight and hence the timing of seasonal depression are 6 months out of phase relative to the Northern Hemisphere). Results in all six markets suggest that the SAD effect is fully captured by a model which allows for time variation in market risk and a time-varying price of risk. An attractive feature of this result given the model we use is that the price of risk can be interpreted as a weighted average of agents' coefficients of relative risk aversion, the weight being the individual agent's proportion of wealth. That is, the SAD effect may well be a natural consequence of changes in risk aversion over time.