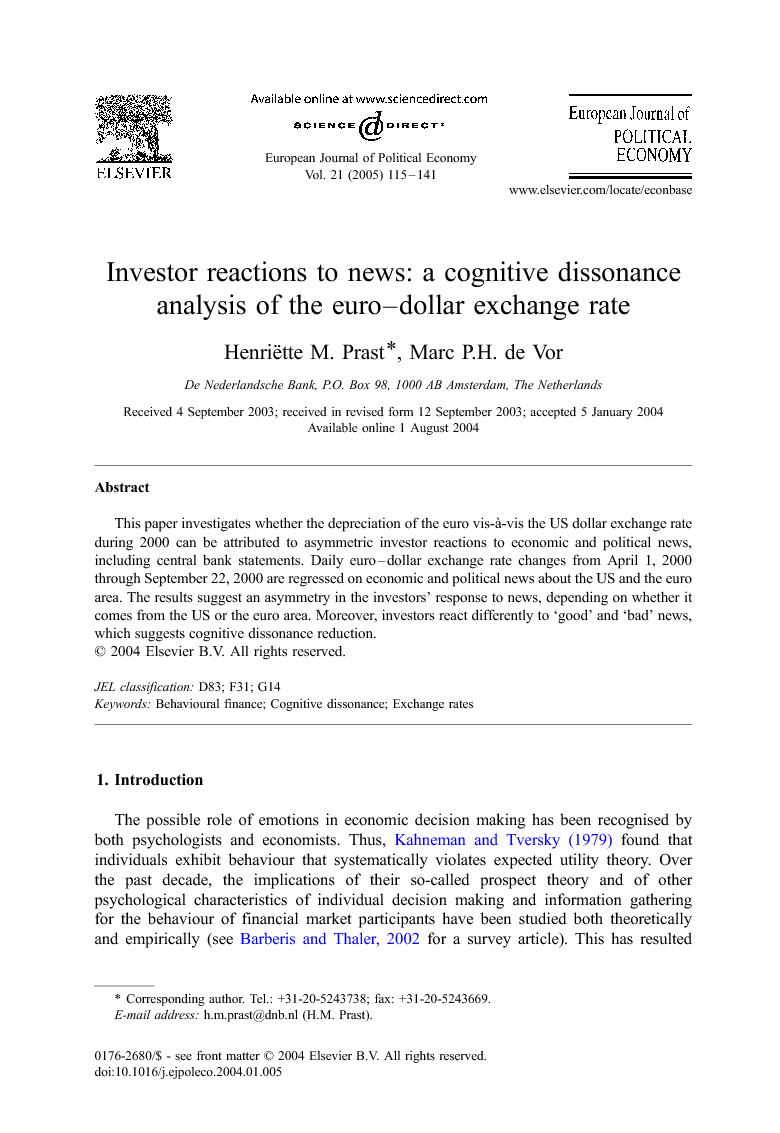 This paper investigates whether the depreciation of the euro vis-à-vis the US dollar exchange rate during 2000 can be attributed to asymmetric investor reactions to economic and political news, including central bank statements. Daily euro–dollar exchange rate changes from April 1, 2000 through September 22, 2000 are regressed on economic and political news about the US and the euro area. The results suggest an asymmetry in the investors' response to news, depending on whether it comes from the US or the euro area. Moreover, investors react differently to ‘good’ and ‘bad’ news, which suggests cognitive dissonance reduction.

The possible role of emotions in economic decision making has been recognised by both psychologists and economists. Thus, Kahneman and Tversky (1979) found that individuals exhibit behaviour that systematically violates expected utility theory. Over the past decade, the implications of their so-called prospect theory and of other psychological characteristics of individual decision making and information gathering for the behaviour of financial market participants have been studied both theoretically and empirically (see Barberis and Thaler, 2002 for a survey article). This has resulted in explanations of anomalies like over-and underreactions of stock prices to news (Daniel et al., 1998), excessive trading by investors Odean, 1998a and Odean, 1998b and the equity premium puzzle (Benartzi and Thaler, 1995). More than two decades prior to the paper by Kahneman and Tversky (1979), Festinger (1957) developed the theory of cognitive dissonance, which states that individuals filter information in order to make it correspond to what they already believe. Over the past decades, his theory has been applied in economic theory. Akerlof and Dickens (1982) have used the concept of cognitive dissonance to explain behaviour in labour markets, whereas Goetzmann and Peles (1997) have used it in studying the behaviour of mutual fund investors. A related psychological phenomenon used in behavioural finance theory to explain underreactions of stock prices to news is conservatism (Edwards, 1968). In this paper, we study empirically whether information filtering due to cognitive dissonance might contribute to explaining the fall in the exchange rate of the euro vis-à-vis the US dollar in the 6 months preceding the first coordinated intervention in the exchange rate markets by the European Central Bank and others in September 2000. It has been argued, both by public authorities and in academic circles, that the depreciation of the euro vis-à-vis the dollar in the course of 2000 was difficult to explain on the basis of economic fundamentals only. Especially when the economic growth differential between the US and the euro area started to narrow in the second quarter of 2000, it was suggested by, for example, Welteke (2000), Wellink (2000) and De Grauwe (2000) that investor sentiments might account at least partly for the weakening of the euro (see Fig. 1 for the euro–dollar exchange rate since January 1, 1999; dollars per euro). The aim of the paper is to assess whether the data support this view. To this end, we study the daily response of the euro–dollar exchange rate to news about the US and news about the euro area, focusing on whether asymmetries can be found in the reaction pattern. Specifically, we concentrate on differences in the reaction to US news and euro area news, and to differences in the response to good and bad economic and political news about these areas. As pointed out, we have analysed the daily euro–dollar exchange rate changes recorded from April 1, 2000, when it had become obvious that the growth differential started to narrow, to the first coordinated exchange rate intervention on September 22, 2000. We have regressed these changes on economic and political news about the US and the euro area. In addition, we have assessed whether the exchange rate reacted differently to good and bad news.Our findings suggest that in the period under consideration investors in foreign exchange markets did indeed react in an asymmetrical manner to news about the US and the euro area. In fact, the exchange rate did not respond to economic news about the euro area, whereas it did to US economic news. This may explain at least partly why, contrary to what exchange rate theory would predict, the recovery of the economy in the euro area in the course of 2000 was not followed by an appreciation of the euro vis-à-vis the dollar. Our findings suggest that as far as political news—statements by central bankers and politicians—is concerned, the reaction to euro area news was stronger than that to US news. This asymmetric reaction pattern may be related to the fact that the ECB did not have an established reputation yet, and to the possibility that investors may have been focusing on the political viability of the Economic and Monetary Union (EMU), and not so much on its economic prospects. The paper is structured as follows. The next section briefly describes a few phenomena in asset markets where asymmetric reactions to news and investor sentiments may have played a role. In Section 3, the method and data of our empirical analysis are outlined. Section 4 presents the results and the conclusions are summarised in Section 5.

In this paper, we studied the reactions of the euro–dollar exchange rate to economic and political news about the euro area and the US. Our aim was to assess whether the changes in the exchange rate can be attributed partly to biased information filtering by market participants. Given the nature of the data set, the results should be interpreted with caution. Nonetheless, it appears that there are asymmetries in the reaction pattern to news. Investors focus on political news and central bank statements as far as the euro area is concerned, whereas they pay less attention to economic news. For news about the US, our analysis suggests that the opposite holds: economic news is important, political news is less so. The asymmetry of this pattern may explain why the narrowing of the economic growth differential between the US and the euro area starting in the first half of 2001 did not cause the euro to appreciate. Investors simply ignored the relatively positive economic news releases about the euro area. We have also found some difference in magnitude in the reaction to good and bad news. However, in the period under consideration investors did not seem to close their eyes to favourable euro news while welcoming good US news. Rather, they seemed to be concerned with the viability of EMU and with the credibility of ECB monetary policy. This may in turn have been related to the historical fact that monetary unions without political union did not survive (Vanthoor, 1996). Obviously, for the markets the proof of the pudding is in the eating, and market participants needed more reassurance that EMU is viable. Meanwhile, the development of the euro in recent times suggests that market participants have become more confident about the viability of monetary union without political union, about the independence of the ECB and about the quality of monetary management in the euro area.