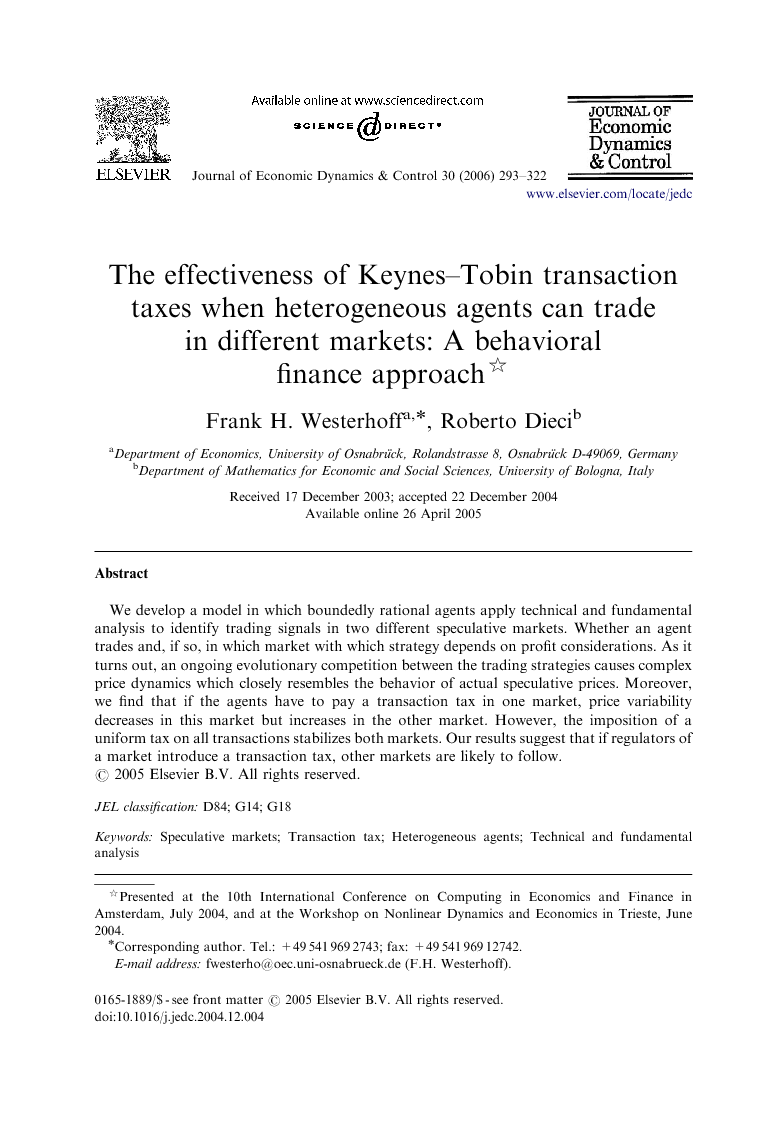 We develop a model in which boundedly rational agents apply technical and fundamental analysis to identify trading signals in two different speculative markets. Whether an agent trades and, if so, in which market with which strategy depends on profit considerations. As it turns out, an ongoing evolutionary competition between the trading strategies causes complex price dynamics which closely resembles the behavior of actual speculative prices. Moreover, we find that if the agents have to pay a transaction tax in one market, price variability decreases in this market but increases in the other market. However, the imposition of a uniform tax on all transactions stabilizes both markets. Our results suggest that if regulators of a market introduce a transaction tax, other markets are likely to follow.

According to classical theory, asset prices properly reflect their fundamentals since arbitrageurs quickly counter mispricings. Keynes (1936) doubted this hypothesis and provided a contrasting view of financial markets. He argued that many persons lack the capability to compute fundamentals correctly. Instead, they are subject to waves of optimistic and pessimistic sentiment. Prices may thus change violently as the result of a sudden shift of opinion. In addition, day-to-day changes in fundamentals may have an excessive impact on prices. Incentives to correct the vagaries of ‘ignorant’ investors are limited. On the contrary, most ‘expert’ investors are concerned with outwitting the crowd. What matters is not what an investment is really worth but what the crowd thinks how the crowd will evaluate it. Keynes concluded that pure laissez-faire capitalism does not fulfill its social purpose. The introduction of a transaction tax might thus prove a serviceable reform, mitigating the predominance of destabilizing short-term speculation over stabilizing long-term investment. Keynes’ suggestion obtained new momentum when Tobin (1978) proposed the imposition of a uniform tax of around 1 percent on all currency transactions in order to placate foreign exchange dynamics. Nowadays, a levy of between 0.05 and 0.5 percent is discussed (Eichengreen et al., 1995, Haq et al., 1996, Frankel, 1996 and Spahn, 2002). Even such small tax rates still have a strong impact on high-frequency trading. For example, if the tax rate is 0.05 percent, then a person who goes in and out of the market once a day accumulates an annual tax burden of about 43 percent. Long-term investors are, of course, less strongly penalized. Although the Keynes–Tobin transaction tax mechanism is vividly debated in the popular media, academic scrutiny has remained scant. One reason was the lack of theoretical models that take into account the action of heterogeneous speculators. But this obstacle has dissolved with the advent of the chartist–fundamentalist approach. Contributions by, e.g. Day and Huang (1990), Kirman (1991), Lux (1995) or Brock and Hommes (1997) show that the behavior of heterogeneous boundedly rational speculators may endogenously create complex price dynamics. These models, which are in harmony with Keynes’ (1936) view of financial markets, have clearly improved our understanding of what is going on in the markets. The goal of this paper is twofold: To develop a simple model in which agents can trade in two speculative markets and to investigate how transaction taxes alter the dynamics. Within our model, agents have five options. They may apply technical or fundamental analysis in market 1 or 2, or they may abstain from trading. The agents tend to pick those rules which did well in the past. Though the (deterministic) evolution of the prices in the two markets is governed by a 10-dimensional (10-D) non-linear map, we are able to derive analytical conditions for the local asymptotic stability of the steady state. In addition, we show that the steady state may lose stability through a Flip or a Neimark–Hopf bifurcation. If we add dynamic noise to the system, then the model's dynamics resembles those of actual markets closely. We observe intricate price motion, bubbles and crashes, high volatility, excess kurtosis, and clustered volatility. The driving force of the complex dynamics is an enduring evolutionary competition between the trading strategies. Transaction taxes affect the competition between trading strategies in a non-trivial way. Suppose a small tax is imposed in market 1. Then market 1 is stabilized but market 2 is destabilized. Although some agents retreat from trading, some destabilizing speculators also migrate from market 1 to market 2. If the agents have to pay a uniform levy in both markets, chartism declines in favor of fundamentalism in both markets and thus both markets display lower price fluctuations and deviations from fundamentals. Hence, there is no reason for regulators of a market not to impose such a tax – at least the own market will benefit. The remainder of this paper is organized as follows. Section 2 briefly reviews the chartist–fundamentalist approach. In Section 3, we present a model in which investors can switch between two markets. Section 4 contains our stability and bifurcation analysis. In Section 5, the model is calibrated to speculative markets. Section 6 studies the impact of transaction taxes and the last section concludes the paper.

We believe that chartist–fundamentalist models can be instrumental in helping regulators of markets determine better policy. We present a model in which agents are free to trade in two different markets applying technical or fundamental analysis. The agents prefer rules which have performed well in the past. As it turns out, the agents judge on average technical and fundamental analysis as equally useful, which is consistent with survey and experimental data. An unending competition between the trading strategies creates, however, complex price dynamics. Simulations reveal that the model is able to mimic the behavior of real speculative markets quite well. In particular, artificial time series are portrayed by intricate price fluctuations, bubbles and crashes, excess volatility, leptokurtic returns and clustered volatility. As ventured by Keynes (1936) and Tobin (1978), small transaction taxes reduce price variability by rendering high-frequency trend chasing unprofitable without affecting long-term fundamental investments. Our model allows this hypothesis to be tested. We find that if a transaction tax is imposed in one market, speculators leave this market. Hence, this market becomes less distorted and less volatile. However, the agents do not simply vanish but reappear on another market, which in turn becomes destabilized. Regulators who impose a levy in their market may force regulators of other markets to follow. If all markets introduce a uniform transaction tax, then economically unjustified speculation is dampened, agents focus more strongly on fundamental data, and all markets are stabilized. Although increasing evidence suggests that transaction taxes may be an effective policy tool, more research is still needed. As stressed by Lyons (2001), transaction taxes are likely to reduce market liquidity. Especially in foreign exchange markets, turnover in the interdealer market may drop sharply. In fact, transaction taxes also decrease market depth within our model since speculators leave the market. As is well known, the less liquid is a market, the larger is the price impact of a given order size. Such a feedback may limit the stabilizing effect of transaction taxes and in the extreme, it may even overcompensate it. This aspects clearly needs more attention. In particular, empirical estimates of the relation between liquidity and price impact would be helpful. Furthermore, it would be interesting to see a model in which the behavior of individual agents is monitored. Wealth effects and demand functions depending on the assets’ cross-correlation may be of relevance. In addition, one may try to test this policy within a laboratory setting with real agents. We hope that our study will attract more academic attention into this important and exciting research direction.