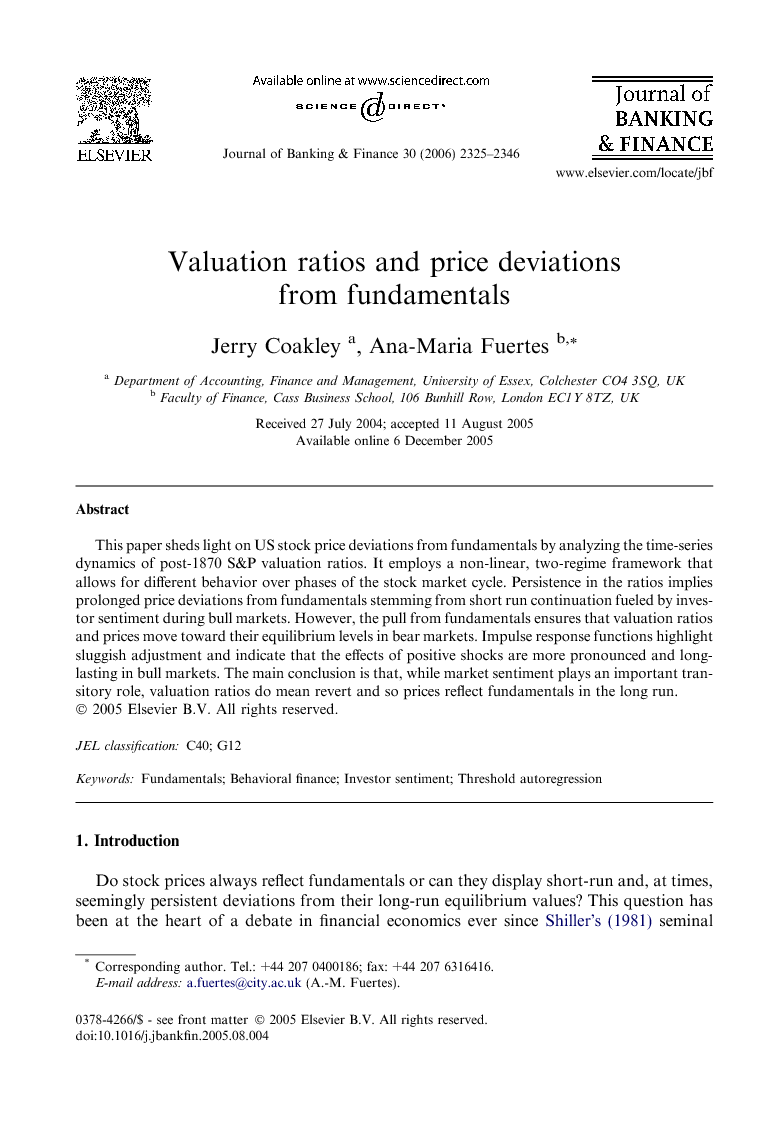 This paper sheds light on US stock price deviations from fundamentals by analyzing the time-series dynamics of post-1870 S&P valuation ratios. It employs a non-linear, two-regime framework that allows for different behavior over phases of the stock market cycle. Persistence in the ratios implies prolonged price deviations from fundamentals stemming from short run continuation fueled by investor sentiment during bull markets. However, the pull from fundamentals ensures that valuation ratios and prices move toward their equilibrium levels in bear markets. Impulse response functions highlight sluggish adjustment and indicate that the effects of positive shocks are more pronounced and long-lasting in bull markets. The main conclusion is that, while market sentiment plays an important transitory role, valuation ratios do mean revert and so prices reflect fundamentals in the long run.

This paper documents asymmetries in the time evolution of valuation ratios employing a non-linear model that allows for distinct bull and bear market phases. Our analysis of a sample of monthly S&P price–dividend and price–earning ratios post-1870 yields some interesting findings. First, the ratios exhibit short-run continuation or underreaction possibly fuelled by irrational exuberance in bull market phases such as the late 1990s episode. Such dynamic behavior, namely, randomly drifting well above their long-run equilibrium level, is difficult to reconcile with risk-based, classical theories. However, it is consistent with recent behavioral contributions in financial economics that underline the role of investor sentiment and noise trading. Second, non-linear impulse response functions that simulate the evolution of the ratios following a one-off innovation indicate sluggish adjustment and that the effects of positive shocks are more pronounced in bull market phases due to the influence of market sentiment. Both of these findings help to explain the counterintuitive lack of mean reversion in the ratios that is typically inferred from standard unit root tests. Finally and reassuringly, we find evidence of reversal or significant adjustment toward equilibrium levels in bear markets. Such mean reversion in valuation ratios implies that stock prices ultimately reflect fundamentals in our framework. What do we learn from these findings? On the one hand, they vindicate Shiller’s (1981) and recent research indicating that prices can exhibit substantial short-run deviations from fundamentals due to the role of market sentiment, noise traders and limits to arbitrage. Our novel time-series framework reveals that the recognition of asymmetric dynamics over the cycle (bull and bear markets) is crucial for reconciling such apparently persistent deviations and the overall mean reversion in valuation ratios. Thus, our results not only underline the importance of noise trading and market sentiment in the short run but also corroborate that prices reflect fundamentals in the long run. Further extensions are desirable. It may be important to acknowledge this regime-sensitive behavior in forecasting models that use valuation ratios as predictors of future stock returns. This is an important issue that we intend to examine in future research. Another development of our non-linear framework would be explicitly to model the duration of bull and bear market phases as stochastic processes in order to forecast turning points in the market.