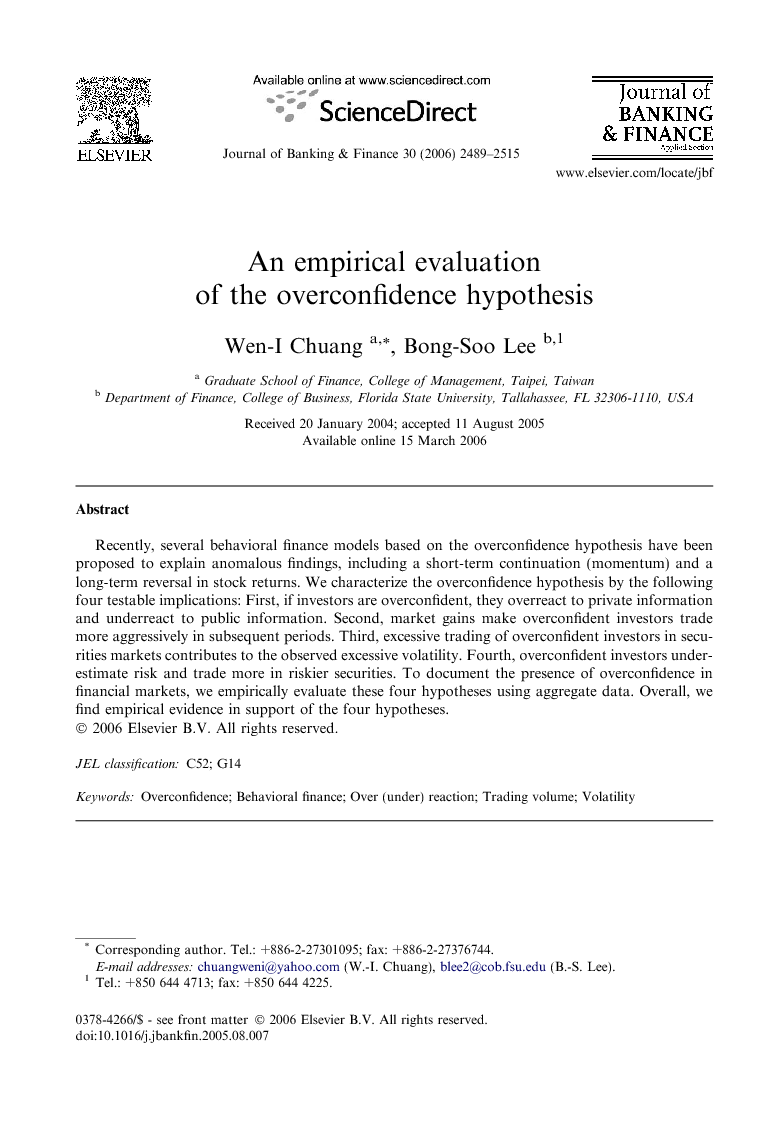 Overconfidence has been proposed as a viable explanation for several observed anomalies in securities markets. In this paper, we devise various empirical frameworks in an attempt to provide a comprehensive evaluation of the empirical validity of the overconfidence hypothesis by focusing on the aggregated behavior of overconfident investors. To study the response of stock prices to private and public information, we employ a just-identified bivariate moving average representation model, the restriction of which is based on theoretical considerations. Our identification of the dynamic effects of private and public information shocks on stock prices shows that, with an initial underreaction, stock prices overreact to private information followed by a correction process, and underreact to public information reaching an equilibrium response without a significant long-run reversal. This price response provides evidence in support of our first hypothesis that overconfident investors overreact to private information and underreact to public information. By performing Granger-causality tests of stock returns and trading volume, we find that high stock returns Granger-cause high trading volume, and that this positive dynamic relation is quite robust for sub-sample periods. We also have investigated the asymmetric trading behavior of investors and find that investors do trade more aggressively in a bull market than in a bear market. This is in accordance with the argument of Daniel et al., 2001 and Gervais and Odean, 2001 that overconfidence is posited to be easily fostered in a bull market. To study investors’ reactions to market gains when they make right and wrong forecasts and to the precision of their forecast errors, we obtain investors’ forecasts of future stock returns and forecast errors by adopting two GARCH-type specifications. We find that investors become overconfident and trade more actively following market gains as they make right forecasts of future stock returns than as they make wrong forecasts. In addition, we find weak evidence that investors trade more actively when their forecast errors are smaller. These are consistent with the theoretical prediction of self-attribution bias in the Daniel et al., 1998 and Gervais and Odean, 2001 models. Overall, these findings provide empirical evidence in support of our second hypothesis that if investors are overconfident, market gains make them trade more aggressively in subsequent time periods. To see whether the relation between excessive trading in securities markets and the observed excessive volatility is due to investor overconfidence, we decompose trading volume into two components: one related to past stock returns and the other unrelated to past stock returns. Then we examine the relation between the volatility of stock returns and these two components of trading volume. We find that conditional volatility is positively accounted for by trading volume caused by past stock returns. This finding provides some empirical evidence to support our third hypothesis that if investors are overconfident, their excessive trading in securities markets contributes to the observed excessive volatility. To examine whether investors underestimate risks in making their investment decisions and trade more in riskier securities as a result of their overconfidence, we construct portfolios with varying risk levels employing two measures of risk: firm-specific risk and return volatility. Overall, we find that investors trade more in riskier stocks regardless of the measure of risk used in constructing the portfolios. Overall, our study provides extensive evidence of the presence of overconfidence in financial markets. There is a growing literature that explores how asset return predictability could arise from rational agents (e.g., Jones and Slezak, 1998, Grundy and Kim, 2002 and Holden and Subrahmanyam, 2002). Typically, these theoretical models rely on some combination of risk aversion and information asymmetry. However, given comprehensive evidence of various implications of the overconfidence hypothesis presented in this paper, we believe the overconfidence hypothesis remains a viable explanation of many stylized anomalous observations in securities markets.