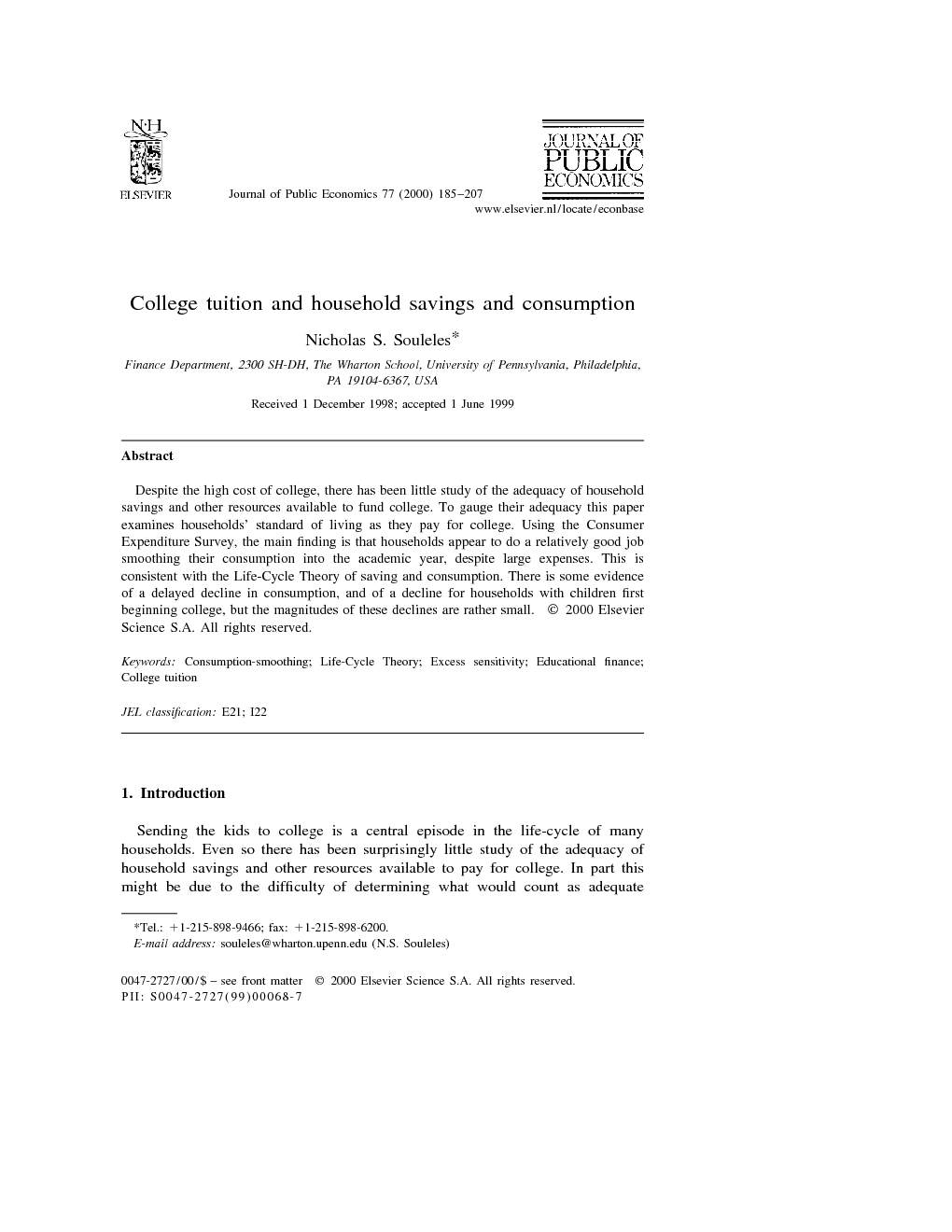 Despite the high cost of college, there has been little study of the adequacy of household savings and other resources available to fund college. To gauge their adequacy this paper examines households’ standard of living as they pay for college. Using the Consumer Expenditure Survey, the main finding is that households appear to do a relatively good job smoothing their consumption into the academic year, despite large expenses. This is consistent with the Life-Cycle Theory of saving and consumption. There is some evidence of a delayed decline in consumption, and of a decline for households with children first beginning college, but the magnitudes of these declines are rather small.

Sending the kids to college is a central episode in the life-cycle of many households. Even so there has been surprisingly little study of the adequacy of household savings and other resources available to pay for college. In part this might be due to the difficulty of determining what would count as adequate resources for a given household. For instance, one cannot simply compare the level of assets on starting college to the cost of college. The optimal level of assets also depends on a host of other factors, such as expected future income and medical expenses, the strength of any bequest motive, etc., that the econometrician does not observe. Further, assets and other resources (especially informal resources like contributions from relatives) are often poorly measured. To gauge the adequacy of college resources this paper instead examines whether households are able to maintain their standard of living — that is, their consumption — as they pay for college. Such an examination does not require measurement of the assets available specifically for college. It also recognizes that, given the cost of college, what matters for household welfare is any distortion in the path of consumption that results from meeting the cost. The data are drawn from the Consumer Expenditure Survey, which has comprehensive coverage of household expenditure, including educational expenditure. Specifically, this paper tests whether households’ noneducational consumption decreases in the fall and following winter and spring in proportion to their college expenditures in the fall. The change in consumption is measured in relation to consumption in the previous summer, spring, and winter, to determine whether saving sharply accelerated just before the start of the academic year, or whether it was already fully underway by then. Of course households use other resources in addition to savings to pay for college, including current income, loans, and contributions from relatives. The test here considers the change in consumption given all the resources available to the household. This is the appropriate consideration as regards household welfare. Although it would be quite interesting to examine the response of consumption over longer horizons as well, the data do not permit this. Nonetheless, the periods examined here are of the greatest interest, since they cover the time when college costs are actually incurred. The response of consumption at this time constitutes a salient test of the Life-Cycle Theory of saving and consumption, and more generally a test of any theory that requires forward-looking households to smooth their consumption.1 In the high-frequency analysis of this paper, paying for college can be thought of as a predictable, predetermined decrease in a household’s net income, that is income net of educational expenditures. Therefore, assuming separability between ‘college services’ and the rest of consumption, the response of noncollege consumption to college expenditures constitutes a test of whether consumption ‘tracks’ income. Forward-looking households should save in advance or borrow to meet the costs of college, in order to smooth their consumption during college. Since they can foresee the potential costs many years in advance, this represents a minimal and so powerful test of consumption-smoothing. This particular test has a number of additional advantages compared to most other life-cycle tests. First, focusing on a specific life-cycle episode — paying for college — controls for much of the variation in marginal utility across the life-cycle, which generically is difficult to control for. Second, since net income is decreasing at the time of payment, the test is free of complications due to liquidity constraints. Finally, the test can be interpreted as an excess sensitivity test. In that context, since college expenditures are predictable there is no need to find a good instrument for them, which should increase the test’s power to detect violations of consumption-smoothing (Shea, 1995). However, unlike declines in income due to unemployment, for instance, college spending is voluntary. Households with fewer resources can choose less expensive colleges, or even delay college. This endogeneity does not vitiate the test of consumption-smoothing, since college expenditures are predetermined by the fall, but it can affect the policy implications of the results. In particular, if households are protecting their consumption by reducing college spending, this could have important consequences for the accumulation of human capital and the distribution of income. In response, some specifications will instrument for a household’s college expenditures with variables like average college costs in the state in which the household resides. The outline of the paper is as follows. Section 2 reviews the literature on college costs and on testing the Life-Cycle Theory. Section 3 describes the data. Section 4 sets out the null and alternative hypotheses that are considered, on the extent to which college costs are paid for out of consumption. Section 5 reports the results. The conclusion, Section 6, is followed by Appendix A further describing the data.

The main finding of this paper is that households sending their children to college appear to do a relatively good job smoothing their consumption well into the academic year, despite large college expenses. Further, households do not sharply cut their consumption in the 6–9 months before the academic year starts. This suggests that whatever saving they do for college has been fully underway at least this many months in advance of their college expenditure. There is, however, some evidence of a delayed decline in consumption in the following winter and spring, and of a decline even in the fall for households with children first beginning college, but the magnitudes of these declines are relatively small. In short the results are broadly consistent with the Life-Cycle Theory, and more generally with any forward-looking theory that requires consumption-smoothing in the face of predictable decreases in income. This consistency is especially noteworthy considering that the test in this paper should be relatively powerful in detecting violations of consumption-smoothing. It is important to stress, however, that these results do not imply that households find it easy to pay the high cost of college, but only that they are rationally meeting this cost. Even if the slopes of their consumption paths are not much distorted, their levels might have been set rather low in order to accumulate sufficient savings. On the other hand, one might expect households to do a relatively good job smoothing consumption in the particular case of paying for college. They should foresee the potential costs of college many years in advance,25 and they usually have some access to guaranteed or subsidized loans and means-tested financial aid. and This paper might usefully be extended in a number of ways. First, it would be interesting to examine the response of consumption over longer periods of time. For instance, given the evidence that households might be saving at least 6–9 months in advance of college, one might try to determine how early they started seriously saving. However, such a longer-run point of view will have to take more explicitly into account the endogeneity of college expenditures. Second, it would be interesting to examine the effect of college expenditures on household portfolios. For example, one might try to better identify the types of assets households draw on to pay for college, especially the role of loans. These extensions will require additional data beyond that available in the CEX. A final extension might investigate more generally the effects on life-cycle savings and consumption of other consumption ‘needs’, such as other aspects of child-rearing or other large expenditures. Do households adequately save in advance of such predictable expenditures, or does their consumption suffer as a result?28 Acknowledgements For helpful comments I thank the editor and two anonymous referees, Orazio Attanasio, Olivier Blanchard, Jerry Hausman, Taejong Kim, Jonathan Parker, Steve Pischke, staff of the Bureau of Labor Statistics, and participants of the MIT and Wharton Macro lunches and the University of Cyprus/Bank of Cyprus Conference on Household Saving and Portfolios. Of course, none of these people are responsible for any errors herein. Financial support from the National Science Foundation is also gratefully acknowledged.