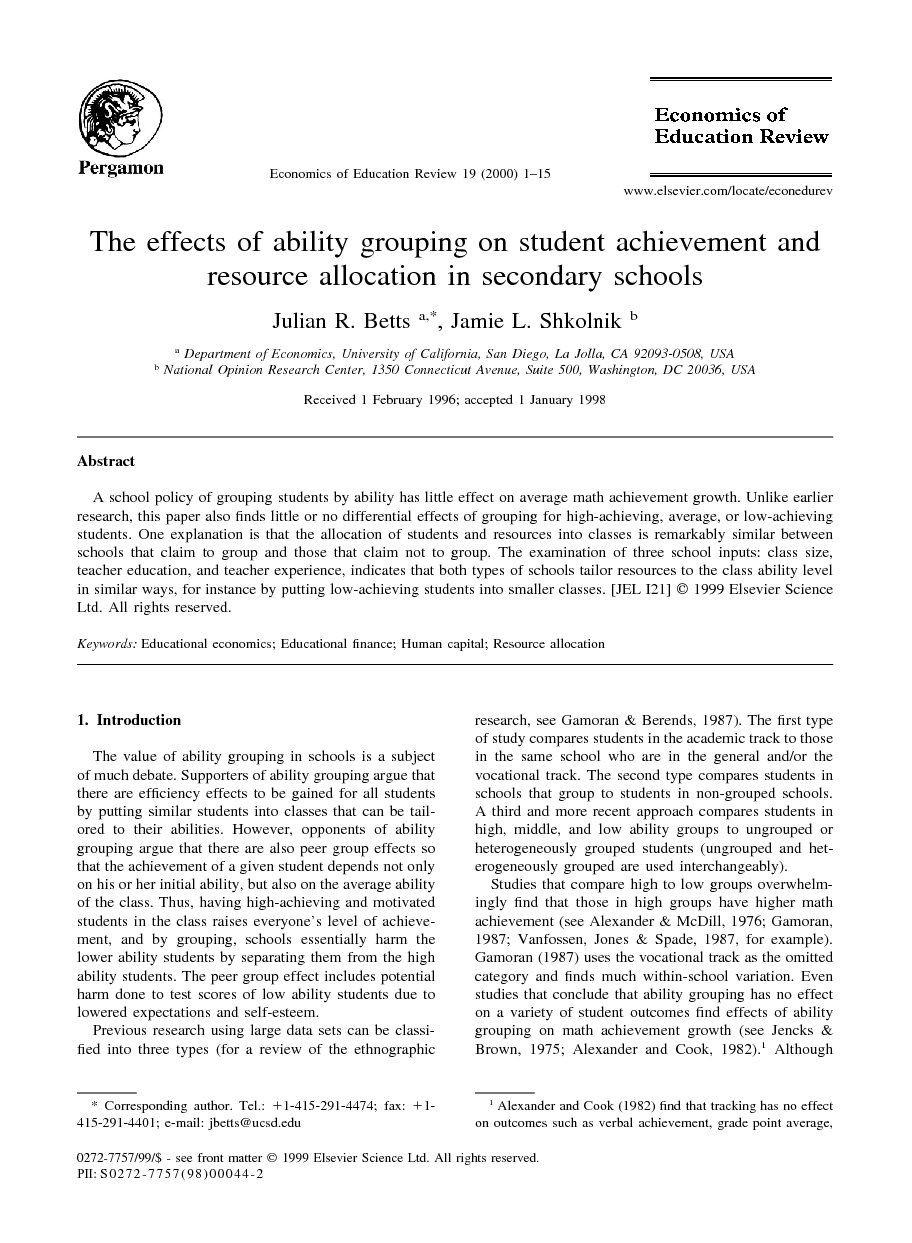 A school policy of grouping students by ability has little effect on average math achievement growth. Unlike earlier research, this paper also finds little or no differential effects of grouping for high-achieving, average, or low-achieving students. One explanation is that the allocation of students and resources into classes is remarkably similar between schools that claim to group and those that claim not to group. The examination of three school inputs: class size, teacher education, and teacher experience, indicates that both types of schools tailor resources to the class ability level in similar ways, for instance by putting low-achieving students into smaller classes.

In this paper we do not find evidence that grouping benefits all groups, but we call into question evidence that grouping has large differential effects in secondary schools. Previous studies which compare high, middle, and low groups at schools with ability grouping to `heterogeneous' groups at schools that do not use grouping find that grouping does have large differential effects. They find that high ability grouped students do better and that the low ability grouped students do worse compared to students at schools without grouping. We argue that to some extent these results may be found due to a comparison of high and low ability students to the average ungrouped students. It appears likely that if the model does not control perfectly for the student's initial achievement, then the coefficients on the class ability proxies will be biased away from zero because they are correlated with the student's own imperfectly measured ability or motivation. We control for average class ability at not only the grouping schools, but the non-grouping schools as well, using two different measures of class ability and find no significant effects of grouping on the bottom class ability groups. However, we do find some evidence that middle students are harmed by grouping and that the top students are helped, but by less than predicted by the former specification. We also calculate propensity scores for group placement of students and group students into quartiles based on these scores. This allows us to compare students of similar backgrounds and likelihoods of being placed in a particular group. When we run OLS regressions on each of the four propensity quartiles, we find the grouping variable to be insignificantly different from zero. An approach that uses instrumental variables for class ability level indicates significant effects of grouping only on the highest level classes. Previous evidence for the differential effects of grouping may in part reflect inadequate controls for class ability level at the non-grouping school. In addition, at least some of the blame for inequality in student achievement and class resources may have been erroneously ascribed to ability grouping. Using panel regressions with fixed effects for schools, we show that both types of schools allocate smaller classes to the lower ability students and that ability grouping does not increase or diminish this effect. The results for teacher education indicate that both types of school are more likely to allocate teachers with master's degrees to higher ability students and classes. Moreover, schools with formal ability grouping policies seem to mitigate the inequality. In the case of teacher experience, higher achieving students in the grouped schools are more likely to be taught by more experienced teachers than their lower achieving counterparts, and vice versa for non-grouped students. This can be viewed as evidence that grouping generates inequality. But if, as some research shows, lower ability students benefit more from less experienced teachers, then it can be interpreted as an increase in efficiency. In summary, this paper uses a nationally representative data set to examine the effects of formal policies of grouping in math classes and makes three contributions to the literature. First, it confirms findings in previous literature that finds no overall effect of formal grouping policies on student achievement. Second, it reproduces the results found in previous studies, that grouping leads to large differential effects, and argues that these results may in part reflect inadequate control groups. Although the paper does find some evidence that grouping has differential effects across students of differing ability levels, after controlling for class ability level in the non-grouping schools, the sizes of the effects are shown to be far smaller than previous estimates. Third, there is little evidence that ability grouping generates inequality in the allocation of school resources among classes. This does not mean that ability grouping is necessarily ineffectual. One possible interpretation of these results is that all schools group students to some extent, even if there is no formal grouping policy.