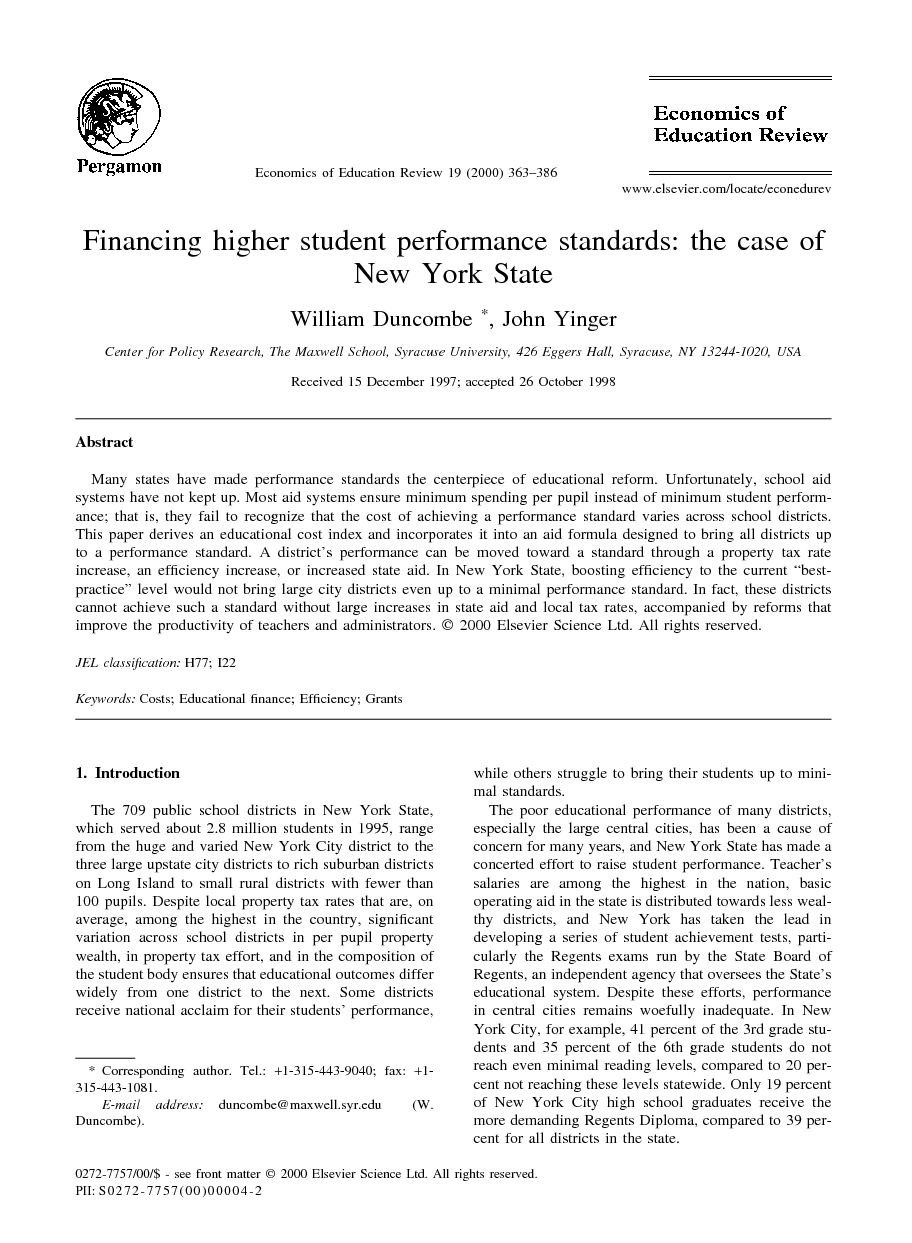 Many states have made performance standards the centerpiece of educational reform. Unfortunately, school aid systems have not kept up. Most aid systems ensure minimum spending per pupil instead of minimum student performance; that is, they fail to recognize that the cost of achieving a performance standard varies across school districts. This paper derives an educational cost index and incorporates it into an aid formula designed to bring all districts up to a performance standard. A district's performance can be moved toward a standard through a property tax rate increase, an efficiency increase, or increased state aid. In New York State, boosting efficiency to the current “best-practice” level would not bring large city districts even up to a minimal performance standard. In fact, these districts cannot achieve such a standard without large increases in state aid and local tax rates, accompanied by reforms that improve the productivity of teachers and administrators.

The 709 public school districts in New York State, which served about 2.8 million students in 1995, range from the huge and varied New York City district to the three large upstate city districts to rich suburban districts on Long Island to small rural districts with fewer than 100 pupils. Despite local property tax rates that are, on average, among the highest in the country, significant variation across school districts in per pupil property wealth, in property tax effort, and in the composition of the student body ensures that educational outcomes differ widely from one district to the next. Some districts receive national acclaim for their students' performance, while others struggle to bring their students up to minimal standards. The poor educational performance of many districts, especially the large central cities, has been a cause of concern for many years, and New York State has made a concerted effort to raise student performance. Teacher's salaries are among the highest in the nation, basic operating aid in the state is distributed towards less wealthy districts, and New York has taken the lead in developing a series of student achievement tests, particularly the Regents exams run by the State Board of Regents, an independent agency that oversees the State's educational system. Despite these efforts, performance in central cities remains woefully inadequate. In New York City, for example, 41 percent of the 3rd grade students and 35 percent of the 6th grade students do not reach even minimal reading levels, compared to 20 percent not reaching these levels statewide. Only 19 percent of New York City high school graduates receive the more demanding Regents Diploma, compared to 39 percent for all districts in the state. In an effort to bridge this performance gap, New York State, by early in the new millennium, will require all students to pass a set of more demanding Regents exams before graduating from high school. New York is not alone in this approach, as many other states are making performance standards for students the centerpiece of their education reforms. Unfortunately, however, state aid programs for local schools have not kept pace with the new emphasis on student performance. Present aid systems focus on fiscal capacity differences by attempting to compensate low-wealth districts. An aid system based on performance standards must take another step by recognizing that the cost of achieving a given performance standard varies across districts. In this paper, we explain one method for developing a comprehensive educational cost index, and show how to incorporate it into a performance-based foundation aid system. While analyzing educational costs has long been a topic of interest in education research (Brazer, 1974, Chambers, 1978 and Kenny, Denslow & Goffman, 1975), costs adjustments made by most states are typically ad hoc “weighted pupil” measures that only partially correct for cost differences across districts. Only recently have scholars shown how to incorporate cost indices in aid formulas designed to achieve outcome equity objectives (Ladd & Yinger, 1994). Expenditure-based aid formulas will not and indeed cannot achieve performance standards in high-cost districts (Duncombe & Yinger, 1998). Large increases in state aid to needy districts not only raise their performance, but also have two undesirable consequences, namely increased school district inefficiency and a reduction of local tax effort. Our simulations for New York state allow us to predict the impact of aid increases on school district efficiency and on the local property tax rate. The interrelationships between aid, tax effort and inefficiency suggest that dramatically improving performance in large central cities will require a combination of approaches: significant increases in state aid, rules to require minimum local tax effort, and implementation of management reforms aimed at improving school district efficiency. This paper is organized into three main sections. We first build the analytic framework for our case study of New York by discussing our measures, models, and simulation methodology. We then present a performance-based foundation aid system that is consistent with the achievement of minimum performance standards, and simulate its impact of performance levels in New York state school districts. Our simulations also allow us to project the impact of different aid systems on school district spending, tax rates, and efficiency. We conclude the paper with several lessons concerning the design of school finance systems to achieve higher student performance.

Performance standards are designed to encourage improved school district performance, especially in the districts that are currently at the bottom of the performance distribution. A school district's performance can be moved toward a standard in one of three ways: improving the district's efficiency, increasing the district's property tax rate, and increasing the district's state aid. However, these changes face severe limits in their ability to help students in low-performing school districts in New York state. Raising efficiency up to the current “best-practice” level would not be sufficient to bring large city districts up to even minimal performance standards. Even if the large central cities could become this efficient, their performance would still fall more than 40 percent below the current median performance in the state. Without increases in aid or efficiency, these districts could not reach performance standards without a dramatic increase in their tax rate. In fact, tax rates would have to increase by more than 50 percent in the large upstate cities and almost quadruple in New York City for these districts to reach the current median performance level. In principle, a performance-based foundation aid system could help low-performing districts reach a standard. However, such a system would involve a significant change in the distribution of aid in the state, and in particular a significant change in the aid to New York City. Because the City has relatively high educational costs and low wealth per pupil, a performance-based aid system would give it far-above-average aid per pupil, not below-average aid as in the current system. Because New York City has so many students, this change would consume a large share of the state aid budget and, at current funding levels, would leave little money for assisting other districts. Indeed, without a significant increase in the state aid budget, shifting to a performance-based foundation aid system would result in a significant decline in aid in all but the neediest districts. The ability of aid increases to boost performance in large cities is limited because it would induce districts to cut their own tax effort and to become less efficient. Increasing aid to New York City by 2.2 times, for example, would result in a 22 percent drop in its tax effort and an almost 10 percent drop in its efficiency, so that its performance would go up by only about 30 percent. Declines in tax effort can be prevented through minimum-tax-rate provisions, but, with the current state aid budget, significant performance improvements in large cities would require large increases in local property tax rates. Even with a performance-based foundation aid program, for example, New York City would have to increase its tax rate by over four times to reach the state's current median performance level. The resulting high school tax rates might compromise the ability of large cities to provide other essential services. Any effort to achieve a minimum performance standard in all districts therefore faces a tradeoff between the equity gains and efficiency losses associated with increased state financing. The burden of financing the states educational system is distributed more equitably across school districts if the state, with its broad tax bases, provides more of the revenue; however, an increase in state revenue is likely to lower the efficiency with which educational performance is delivered. In New York, the current state share is probably too low on fairness grounds, but any increase in state funding should be accompanied by management assistance or monitoring to minimize efficiency losses.