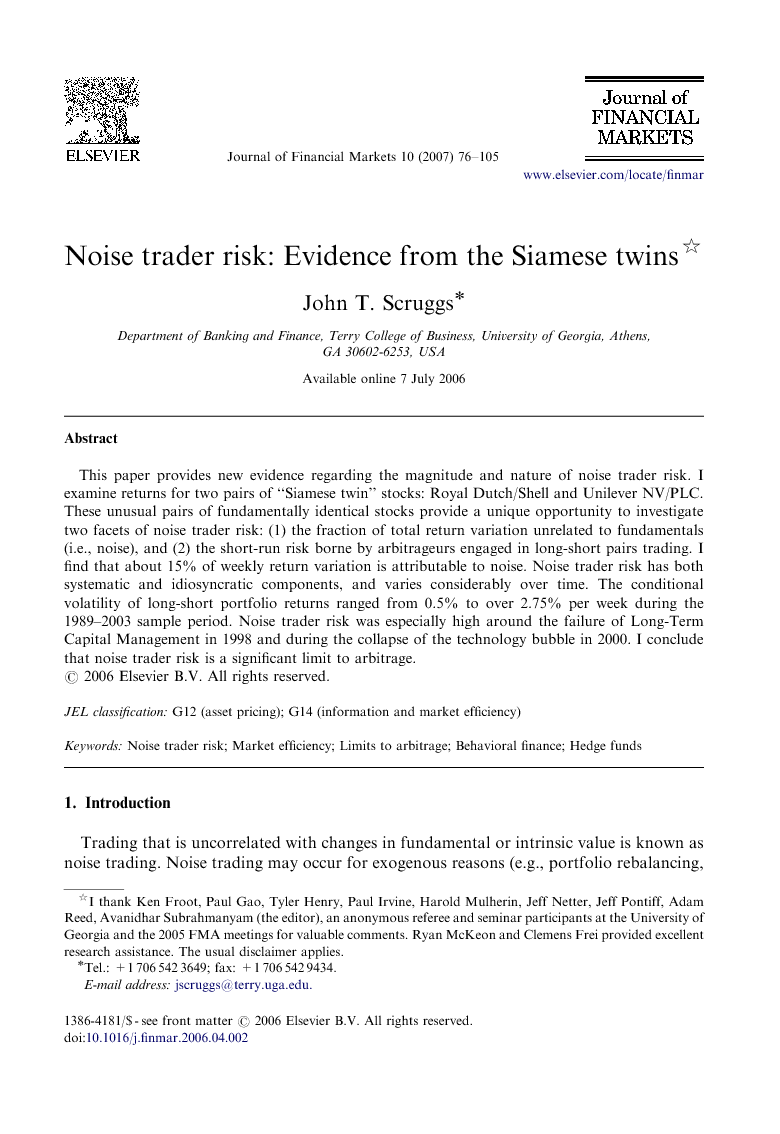 This paper provides new evidence regarding the magnitude and nature of noise trader risk. I examine returns for two pairs of “Siamese twin” stocks: Royal Dutch/Shell and Unilever NV/PLC. These unusual pairs of fundamentally identical stocks provide a unique opportunity to investigate two facets of noise trader risk: (1) the fraction of total return variation unrelated to fundamentals (i.e., noise), and (2) the short-run risk borne by arbitrageurs engaged in long-short pairs trading. I find that about 15% of weekly return variation is attributable to noise. Noise trader risk has both systematic and idiosyncratic components, and varies considerably over time. The conditional volatility of long-short portfolio returns ranged from 0.5% to over 2.75% per week during the 1989–2003 sample period. Noise trader risk was especially high around the failure of Long-Term Capital Management in 1998 and during the collapse of the technology bubble in 2000. I conclude that noise trader risk is a significant limit to arbitrage.

This paper provides new evidence regarding the magnitude and nature of noise trader risk. I study the returns for two pairs of “Siamese twin” stocks: Royal Dutch/Shell and Unilever NV/PLC. These twin stocks are exposed to the same fundamental risk factors and should respond identically to news about intrinsic value. Thus, they present a unique opportunity to learn about noise trader risk. I examine two facets of noise trader risk: (1) the fraction of total return variation unexplained by fundamentals (i.e., noise), and (2) the short-run risk borne by arbitrageurs engaged in long-short pairs trading. In simple regressions of stock returns on the returns of a twin stock, I find that about 85% of weekly return variation is explained by fundamentals. I attribute the remaining 15% to noise. The explained variation climbs to about 90% for monthly returns. The explained variation from this model-free approach greatly surpasses that reported by Cutler et al. (1989), Roll (1988) and Fama (1990). However, I conclude that noise trading contributes substantially to stock return volatility. The relative mispricings between “Siamese twin” stocks are often cited as a puzzling violation of the law of one price and a challenge to the efficient markets hypothesis. I find that the significant and persistent deviations from theoretical parity previously documented by Rosenthal and Young (1990) and Froot and Dabora (1999) persisted and even increased in the 1990s despite the trading activity of well-capitalized hedge funds such as LTCM. Long-short arbitrage positions in these “Siamese twin” stocks are free of bad-model risk and fundamental risk. However, they are exposed to noise trader risk, and analysis of hypothetical long-short portfolio returns yields valuable insights into the nature of noise trader risk. Using a limited arbitrage-noise trader model of stock returns, I show that long-short portfolio returns reflect relative changes in noise trader sentiment across habitats. I find evidence that noise trader risk faced by arbitrageurs is substantial, that it has both systematic and firm-specific components, and that it varies considerably over time. As in Froot and Dabora (1999), I find that long-short portfolio returns covary excessively with the stock market indices and currencies of the markets where the twin stocks are traded most actively. The limited arbitrage-noise trader model attributes these correlations to comovements in noise shocks, not comovements in fundamental shocks. I find that the volatility of noise shocks is substantial and highly persistent. The level of noise trader risk varied from 0.5% to 2.75% per week over the sample period. Noise trader risk was especially high during the failure of LTCM in 1998 and peaked at the height of the internet/technology bubble in 2000. Since transaction and financing costs are relatively low for large, liquid stocks like the twins, it is likely that noise trader risk is a significant limit to arbitrage. This view is consistent with Pontiff (2006), who suggests that idiosyncratic risk is the single largest cost faced by arbitrageurs. These results raise important questions about the broader issue of market efficiency. If noise trader risk can prevent arbitrageurs from eliminating relative mispricing between pairs of nearly identical assets, then what effect does noise trader risk have on absolute mispricings? The EMH relies on arbitrageurs to enforce an equilibrium in which prices, on average, reflect fundamental value. How efficient can financial markets be if, as Shleifer and Vishny (1990) predict, arbitrageurs are unwilling to commit capital to long-term assets?