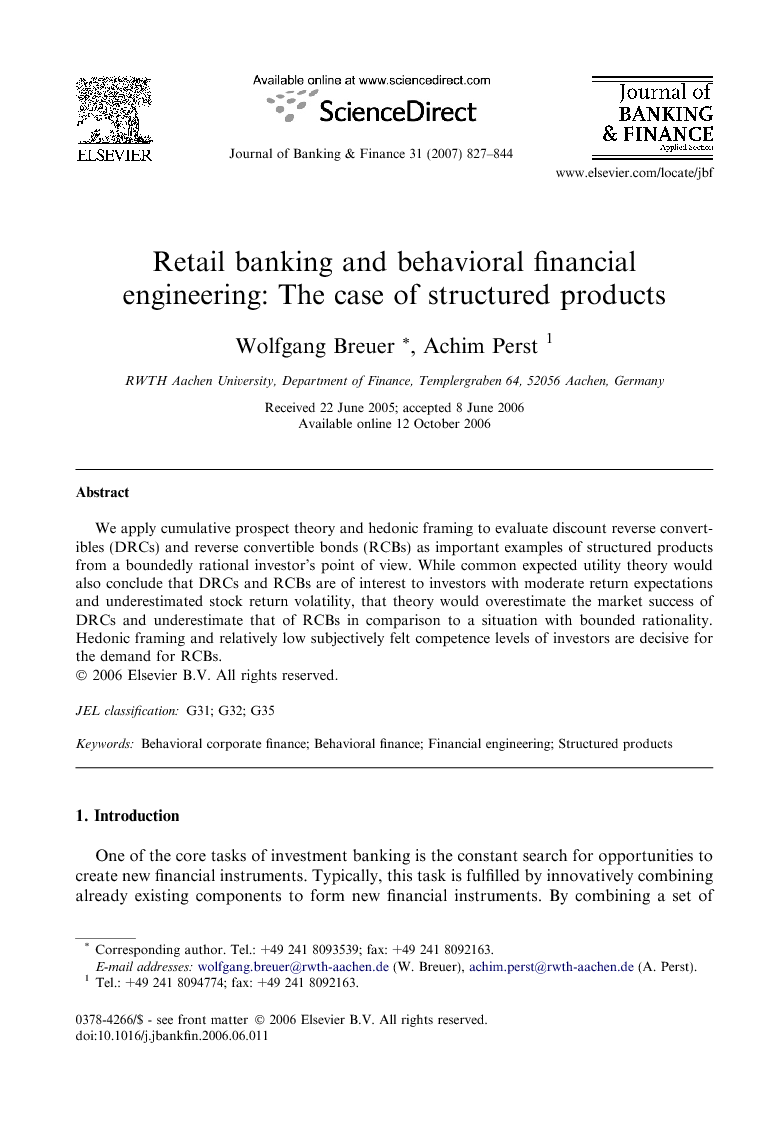 We apply cumulative prospect theory and hedonic framing to evaluate discount reverse convertibles (DRCs) and reverse convertible bonds (RCBs) as important examples of structured products from a boundedly rational investor’s point of view. While common expected utility theory would also conclude that DRCs and RCBs are of interest to investors with moderate return expectations and underestimated stock return volatility, that theory would overestimate the market success of DRCs and underestimate that of RCBs in comparison to a situation with bounded rationality. Hedonic framing and relatively low subjectively felt competence levels of investors are decisive for the demand for RCBs.

Our paper was mainly motivated by our intention to analyze discount reverse convertibles and reverse convertible bonds as typical examples of structured products against the background of the cumulative prospect theory of Tversky and Kahneman, 1992 and Thaler, 1985 hedonic framing rule for mental accounts, with the latter being extended to the case of uncertain prospects. Moreover, we allowed for the consequences of different individuals’ competence levels as expressions of varying attitudes towards ambiguity. We found that DRCs and RCBs are of interest to investors who moderately estimate the expected return of the underlying stock and who underestimate the corresponding return volatility. While this result holds true for both fully rational individuals and boundedly rational ones, the possible demand for DRCs seems to be significantly overestimated, if full rationality is used as an approximation of boundedly rational investors. Moreover, without hedonic framing, the demand for RCBs cannot be understood. Varying competence levels turn out to be more relevant for the evaluation of DRCs and RCBs than are the optimization of redemption values, interest payments and absolute premia under explicit consideration of aspects of bounded rationality. In particular, RCBs become more interesting for, ceteris paribus, reduced competence. This finding might give rise to some practical recommendations, such as that of addressing less experienced investors. Though we have only considered just one specific DRC and a corresponding RCB, our qualitative findings carry over to other DRCs and RCBs on stock indexes, as long as we do not alter our distributional and preference-related assumptions, since then, only parameters of minor importance – like the time to maturity and the riskless interest rate – could be changed, while almost all the more interesting parameters have already been the object of our analyses. Nevertheless, there are several important possibilities of broadening our examination. As a first interesting aim for further research, our approach should be extended to the analysis of more complex portfolio selection problems. This would give rise to the relevance of some kind of systematic risk from the private investor’s point of view. Moreover, we have only analyzed situations with perfect inter-bank competition, i.e., no positive profit at all for all banks, as in the scenarios underlying Fig. 1 and Fig. 2, and with no competition at all among banks as in the situations examined in Table 1 and Fig. 3. However, since financial innovations can be replicated quite easily by competitors, possible innovators’ monopoly gains will erode in the long run. As an extreme example, Bertrand competition among banks without capacity constraints would eventually force absolute margins to reduce to zero and, thus, imply indeed perfect competition. As known from Kreps and Scheinkman (1983), Bertrand competition with endogenous capacity constraints leads to situations which resemble pricing behavior in Cournot oligopolies. Such situations could also be handled by our approach, because this modification would only reduce accessible private investors’ wealth W0,tot from the issuer’s point of view without changing substantially the relevance of our analysis. Furthermore, in any case, competition will also induce banks to steadily create new financial products and to take advantage of temporary monopoly positions, thus giving a further justification for the analysis corresponding to Table 1 and Fig. 3. Finally, we have only considered the most straightforward scenario for the valuation of DRCs and RCBs, as we did not allow for aspects such as stochastic interest rates and stochastic volatility of stock prices as well as issuers’ credit risk. In the first instance, such additional risk problems will influence the arbitrage-free valuation of these financial derivatives. While such variations should not affect our qualitative findings, optimal absolute und relative margins might be influenced. Nevertheless, because of space constraints, such issues shall be postponed to future research as well.