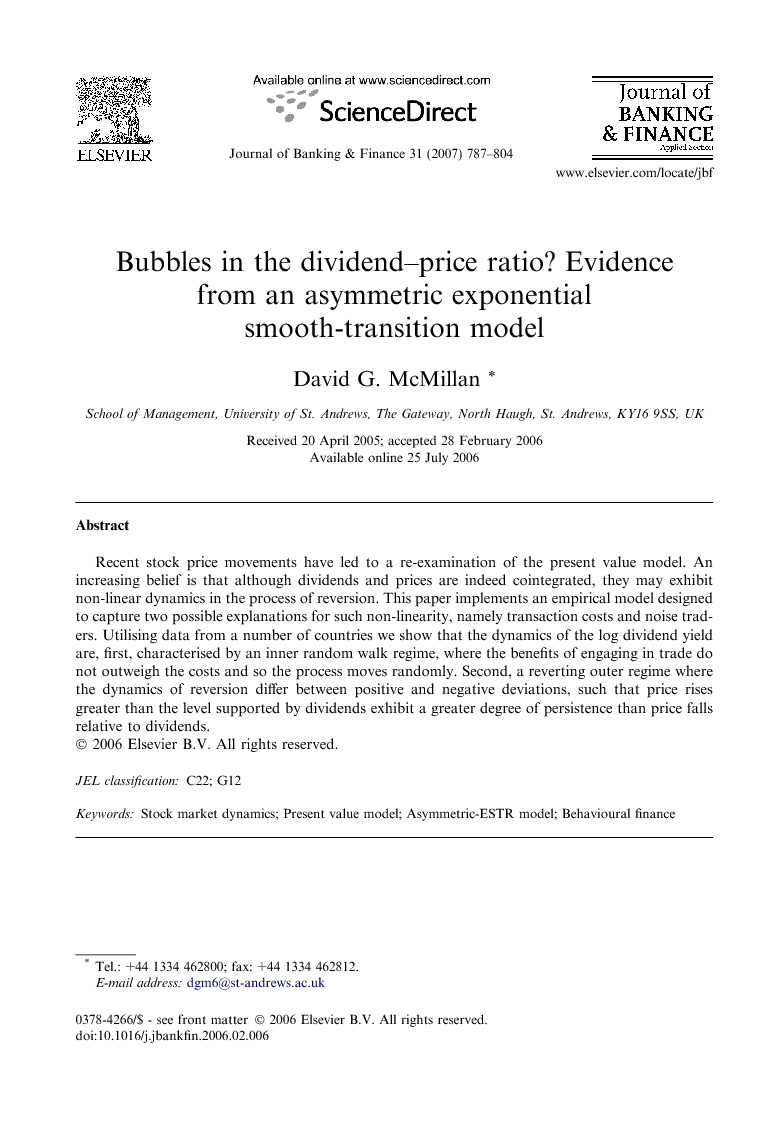 Recent stock price movements have led to a re-examination of the present value model. An increasing belief is that although dividends and prices are indeed cointegrated, they may exhibit non-linear dynamics in the process of reversion. This paper implements an empirical model designed to capture two possible explanations for such non-linearity, namely transaction costs and noise traders. Utilising data from a number of countries we show that the dynamics of the log dividend yield are, first, characterised by an inner random walk regime, where the benefits of engaging in trade do not outweigh the costs and so the process moves randomly. Second, a reverting outer regime where the dynamics of reversion differ between positive and negative deviations, such that price rises greater than the level supported by dividends exhibit a greater degree of persistence than price falls relative to dividends.

The recent behaviour in stock price dynamics has led researchers to re-examine the link between prices and the notion of fundamental value provided by the present value model.1 This model argues that current prices depend upon the present value of discounted future dividends, where the discount rate is equivalent to the required rate of return. Much of the impetus for this renewed interest in the present value model arises from the unprecedented rise in stock prices at the end of the last century followed by the subsequent fall. Two broad schools of thought developed during the rise period. The first school developed, what can be termed, ‘new era’ explanations, for example, that the development of the new technology sector resulted in investors expecting higher future earnings and dividends, or that investors reduced the rate at which they discount future dividends, perhaps as a result of increased ease of trading.2 The second school continued to argue that fundamentals had basically not changed, that they would reassert themselves, and the stock market was seriously over-valued (Campbell and Shiller, 2001, were the most notable proponents of this view). Following the fall in prices, the general consensus view was that prices merely experienced an extended bubble which ultimately burst, and researchers have asked whether previously implemented empirical techniques are sufficiently able to capture these dynamics. This has subsequently led to a reassessment of the time-series properties of prices and dividends, and whether they do indeed exhibit a long-run relationship. The extant empirical evidence on the nature of the dynamics of the price–dividend relationship tends to fall in to two broad lines of enquiry; those reporting unit root behaviour in the price–dividend relationship, which in turn provides implicit support for the ‘rational’ bubbles hypothesis (e.g. see Froot and Obstfeld, 1991, Lamont, 1998, Balke and Wohar, 2002 and Bohl and Siklos, 2004), and those arguing that the price–dividend ratio exhibits fractional integration such that while it is characterised by long memory, the series is ultimately mean reverting (Caporale and Gil-Alana, 2004, Cuñado et al., 2005 and Koustas and Serletis, 2005). Furthermore, the majority of extant studies on the relationship between prices and dividends have focussed upon the US stock market. In this paper we seek to extend that analysis to data from a range of countries. Some notable exceptions that do not exclusively focus upon US data include, Brooks and Katsaris (2003) who argued in favour of the bubble hypothesis in the UK, Kapetanios et al. (2006) who in the course of developing test statistics for non-linear (in particular, exponential smooth-transition, ESTR) cointegration analysed the behaviour between prices and dividends for eleven major international indices, and Kanas (2005) who reports non-linear dynamics in the price–dividend relationship for Germany, Japan, the UK and US. The present paper seeks to extend the current analysis, including that conducted by Brooks and Katsaris, 2003, Kapetanios et al., 2006 and Kanas, 2005, in several ways. First, each of these studies tests for cointegration between real prices and dividends. This implies that the underlying present value model is one in which the discount rate is constant. In common with most of the extant literature reported above for the US, we seek to examine the version of the present value model where the discount rate is time-varying. Second, while we wish to consider the ESTR model (in common with Kapetanios et al), where, of note, it has been shown (Byers and Peel, 2003) that the ESTR (non-linear) model is capable of reproducing the long-memory fractional (linear) model properties reported by several authors cited above, we also wish to extend the model in order to capture bubble-like dynamics should they be present. More specifically, Kapetanios et al. motivate their non-linear study through the presence of transaction costs, such that the size of the deviation from equilibrium is the primary focus and the resulting dynamics differ between a random walk inner regime and a reverting outer regime, but that the speed of reversion is the same regardless of the sign of disequilibrium. We extend this by considering the arguments of recent behavioural finance models that suggest the actions of traders differ between rising and falling markets. That is, noise traders may be more emboldened in rising markets and therefore exhibit a tendency to overreact to good news and subsequently trend-chase price rises, whilst in falling markets noise traders may exhibit more conservative behaviour. Therefore, we consider an adaptation of the ESTR model to allow for asymmetry in the sign of the disequilibrium. This rationale for asymmetric dynamics is to be contrasted with the rational bubble explanations which are not informative as to the dynamic interactions which take place in the run up to a bubble, and indeed, as commented upon by several authors, are rather arbitrary in nature.3 That is, while the rational bubble approach (and indeed the fractional integration approach) can provide a statistical characterisation of the data and model the dynamics of a bubble and crash, it is unable to provide a rationale for the onset of a bubble process. In contrast, the model introduced here is grounded in the behavioural finance arguments regarding noise traders and the behaviour of arbitrageurs. The aim of this paper is, therefore, to consider a model that is capable of capturing the dynamic characteristics of the log dividend yield for a selection of major international economies. By implementing an asymmetric-ESTR model we hope to account for both the transaction cost effect noted by Kapetanios et al. which differentiates between large and small deviations from equilibrium, and the noise trader approach, which differentiates between increasing and decreasing deviations. The remainder of the paper is organised as follows, Section 2 outlines the theoretical motivations for the paper, Section 3 introduces the empirical models, Section 4 presents the data and empirical results, while Section 5 summarises and concludes.

This paper has sought to examine the time-series dynamics of the log dividend–price ratio for thirteen countries. Renewed interest in the movements of this ratio and the present value model that underlies it has been evident following the recent rise and fall of share prices. One approach to resolving the apparent problem caused by the lack of observed stationarity in this ratio, which implies that log dividends and log prices are cointegrated with a parameter vector (1, −1) is that temporary deviations may arise due to transaction costs and heterogeneous traders. However, extant evidence has typically either focused only upon transactions costs, and implemented an ESTR model that differentiates between small and large deviations, or considered the rational bubble model and sought evidence for or against that hypothesis, unfortunately the rational bubble approach is largely uninformative with regard to trader behaviour and arbitrary in nature. The present paper extends the empirical analysis by considering a generalised version of the ESTR model such that it not only captures small/large deviations but also asymmetry between positive and negative changes in the log dividend–price ratio, which are consistent with noise trader dynamics, and hence emphasises the role of market sentiment. The results from this exercise suggest the following conclusions, first, the log dividend–price ratio appears non-stationary, and hence the present value model does not hold, when examined in a linear framework. Second, the log dividend–price ratio still appears non-stationary when using a symmetric ESTR model. Third, an asymmetric-ESTR model does provide evidence of stationarity, such that the dynamics of the log dividend yield are characterised by an inner random walk regime, where the benefits from engaging in trade do not outweigh the costs and so the process moves randomly, and a reverting outer regime whereby the dynamics of reversion differ between positive and negative deviations due to the presence of noise traders such that when prices rises are greater than the level supported by dividends they exhibit a greater degree of persistence than when prices are falling relative to dividends. The results presented here thus extend our current understanding of the dynamic behaviour of the price–dividend relationship. In particular, these results suggest that a full characterisation of the data comes from examining both non-linearity, which arises from transaction costs delaying the process of arbitrage, and asymmetry, which arises from the interaction of noise and fundamental traders, extant research has typically focused upon only one of these characteristics.