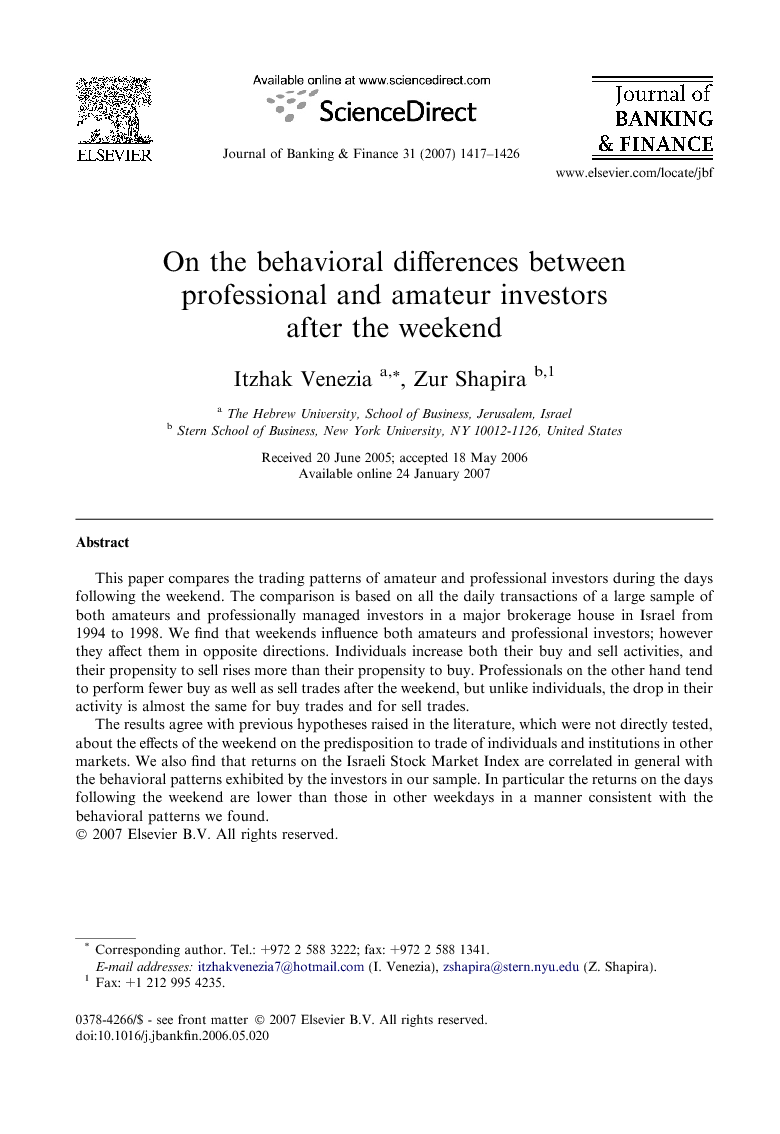 This paper compares the trading patterns of amateur and professional investors during the days following the weekend. The comparison is based on all the daily transactions of a large sample of both amateurs and professionally managed investors in a major brokerage house in Israel from 1994 to 1998. We find that weekends influence both amateurs and professional investors; however they affect them in opposite directions. Individuals increase both their buy and sell activities, and their propensity to sell rises more than their propensity to buy. Professionals on the other hand tend to perform fewer buy as well as sell trades after the weekend, but unlike individuals, the drop in their activity is almost the same for buy trades and for sell trades. The results agree with previous hypotheses raised in the literature, which were not directly tested, about the effects of the weekend on the predisposition to trade of individuals and institutions in other markets. We also find that returns on the Israeli Stock Market Index are correlated in general with the behavioral patterns exhibited by the investors in our sample. In particular the returns on the days following the weekend are lower than those in other weekdays in a manner consistent with the behavioral patterns we found.

Some explanations of the weekend phenomenon (effect) rely on the differential behavior of amateurs vs. professional investors.2 These explanations suggest that individual investors tend to transact more on Mondays and additionally, that they are more likely to sell rather than buy after the weekend.3 According to these theories, the selling pressure by individuals, who are more likely to trade in smaller stocks, may lead to the weekend phenomenon. These authors propose that individual investors are busy at work during the week and consider trading decisions mainly during the weekend and consequently they are more likely to trade (either buy or sell) on Mondays. Professional and institutional investors sometimes use the beginning of the week to plan for the rest of the week and this causes reduced activity. According to these theories amateur investors are more likely to sell rather than buy on Mondays since even when the decision of the individual investor is to buy, because of liquidity considerations the individual may prefer to precede it with a sell.4 In this paper we examine the extent to which buy/sell decisions by amateurs and professionals are affected by the weekend, and whether these effects are the same for these two types of investors. In particular we test if there is an overall tendency of amateur investors to trade more following the weekend, and whether this tendency is stronger for sell than for buy transactions. This may shed some light on the above theories of the weekend phenomenon. We also investigate to what degree returns on the Israeli Stock Market Index are correlated with the behavioral patterns of the investors in our sample, and we focus on the correlation between returns after the weekend and the tendencies of our investors to buy or sell during these days. Our main tool of analysis is a proprietary data set from a large brokerage house in Israel, detailing all the transactions of amateur and professional investors trading through this brokerage house during the period 1994–1998. The differential effects of weekends on individuals and institutions have been examined before by Abraham and Ikenberry, 1994, Brockman and Michayluk, 1998, Chan et al., 2004, Kamara, 1997 and Lakonishok and Maberly, 1990. In these papers however, the behavior of professionals was not observed directly but was inferred from the behavior of large stocks (which presumably are held more often by professionals or large institutions managed by professionals).5Chan et al. (2004), show that during 1981–1998, the mean Monday returns of stock portfolios with a higher percentage of institutional investors were significantly higher than those of stock portfolios with a lower percentage of institutional investors. Based on this and other observations of returns’ trends in the periods they studied, Chan et al. argue that the weekend effect could be due to the trading activities of less sophisticated individual investors. Their results conflict somewhat with Sias and Starks (1995), who found no evidence for a weekend effect during 1977–1991, but found a Monday effect conditional on previous Friday returns and size.6 Our study provides more powerful tests of the above hypotheses since it relies on direct observations of daily trading data by amateurs and professionals instead of proxies for their behavior. In addition, the weekend phenomenon is not the same in all markets. For example, Wang et al. (1997), show that the weekend effect was more severe in the NASDAQ market than in the NYSE during 1962–1993. Our analysis of the differential weekend phenomenon effect on the behavior of amateurs and professionals in markets outside the US adds to the generality of the theories on this phenomenon. It may also help to explain differences in the weekend effect across markets and the vagaries of this anomaly over time within markets since the relative weight of amateurs vs. professionals varies across countries, and it may fluctuate differently within countries over time. The paper is organized as follows: In Section 2 we describe the data. In Section 3, we analyze the effect of the weekend on the behavior of investors and investigate the correlation between returns, weekends and several behavioral variables. Section 4 concludes.

In this paper we have shown for a large sample of amateur and professional investors in Israel that both groups change their investment behavior after weekends. Amateurs increase their trading activities (buy and sell decisions) whereas professionals decrease their number of trades after weekends. In line with previous conjectures weekends affect amateurs stronger on sell decisions while professionals reduce both their buy and sell activities similarly. The paper thus supports by direct tests some previously hypothesized theories of the different buying and selling tendencies of individuals and professionals on the day following the weekend. We have demonstrated that stock market returns are significantly correlated with the trading inclinations of the traders in our sample, and that returns after the weekends are lower than on other days of the week in a manner consistent with the above behavioral patterns. The support the paper provides for a weekend effect and to a conditional weekend effect in returns in Israel during the period studied, together with the correlation found between returns and the behavioral trading patterns of the investors, point to the important effects of differential behavior of traders on prices.