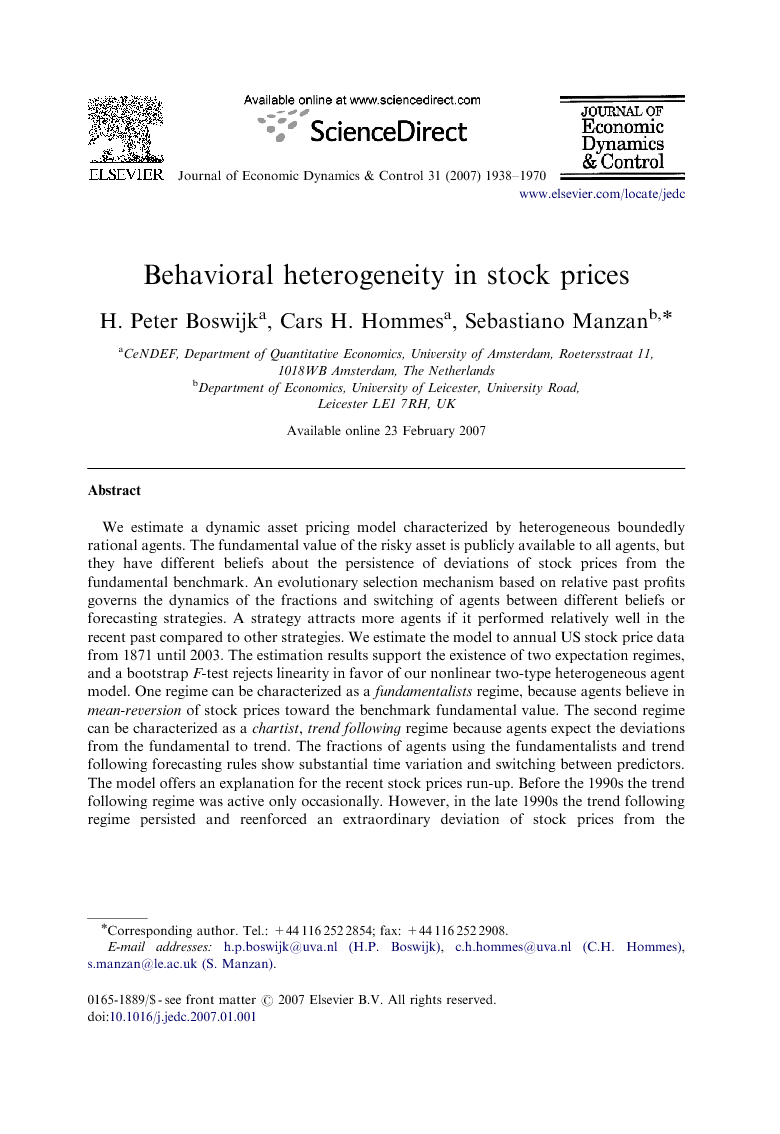 We estimate a dynamic asset pricing model characterized by heterogeneous boundedly rational agents. The fundamental value of the risky asset is publicly available to all agents, but they have different beliefs about the persistence of deviations of stock prices from the fundamental benchmark. An evolutionary selection mechanism based on relative past profits governs the dynamics of the fractions and switching of agents between different beliefs or forecasting strategies. A strategy attracts more agents if it performed relatively well in the recent past compared to other strategies. We estimate the model to annual US stock price data from 1871 until 2003. The estimation results support the existence of two expectation regimes, and a bootstrap F-test rejects linearity in favor of our nonlinear two-type heterogeneous agent model. One regime can be characterized as a fundamentalists regime, because agents believe in mean-reversion of stock prices toward the benchmark fundamental value. The second regime can be characterized as a chartist, trend following regime because agents expect the deviations from the fundamental to trend. The fractions of agents using the fundamentalists and trend following forecasting rules show substantial time variation and switching between predictors. The model offers an explanation for the recent stock prices run-up. Before the 1990s the trend following regime was active only occasionally. However, in the late 1990s the trend following regime persisted and reenforced an extraordinary deviation of stock prices from the fundamentals. Recently, the activation of the mean-reversion regime has contributed to drive stock prices back closer to their fundamental valuation.

We have proposed a behavioral asset pricing model with endogenous evolutionary switching of investors between different forecasting strategies according to their relative past performances and estimate the model on yearly S&P500 data from 1871–2003. Our estimation results show statistically significant behavioral heterogeneity and substantial time variation in the average sentiment of investors. Investors believe that fundamentals are driving the long term dynamics of stock prices, but they interpret the persistence of the deviation of stock prices from their benchmark fundamentals in a different way. If a recent increase in stock prices is observed, agents tend to extrapolate that the mispricing will increase even further and allocate more capital to the trend following belief. However, in periods of gradual price changes they believe that the deviation is transitory and will revert back to its historical mean. This type of time variability of agents average sentiment is also supported by the survey evidence in Shiller (2000). In particular, our model suggests an evolutionary explanation of the ‘irrational exuberance’ of stock prices in the late nineties. Starting in 1996 the behavior of stock prices was at odds with the evidence that when deviations are large they tend to revert back to their long run mean. From 1996 until 1999 the PD-ratio indicated that the stock market was overvalued and it was likely to correct back to the fundamentals. The PE-ratio gave the same indication, although less clearly and somewhat later in time. Despite the common feeling among investors that stocks were overvalued, the market continued to grow by approximately 30% a year. The estimation of our model shows that a large majority of investors had explosive, trend following beliefs about the persistence of the deviations from the fundamentals. Apparently, investors neglected the role of fundamental news and continued to buy stocks for purely speculative reasons. The extraordinary performance of the trend following strategy convinced most investors to adopt this type of beliefs. The outcome of our model is consistent with the view that fundamentalists with mean-reverting expectations had limited capital to arbitrage the mispricing away and force stock prices back to the fundamental values. Our behavioral model suggests that in the mid-nineties optimistic, boundedly rational investors, motivated by short run profitability, reinforced the rise in stock prices triggered by higher expected cash flows of the internet sector. An important topic for future research is to investigate the robustness of behavioral heterogeneity in financial market data. In particular, we have chosen a very simple fundamental process, the static Gordon growth model with constant growth rate of dividends or earnings and constant discount rate, allowing only for one jump in the estimated risk premium based on dividends in 1950, as in Fama and French (2002). For deviations of this simple benchmark our estimation results show significant behavioral heterogeneity of fundamentalists and trend following trading strategies, both for fundamental valuation based on dividends and earnings. As a first step, we show in the Appendix that our estimation results are fairly robust, by considering deviations from a benchmark fundamental with time variation in the cash flow growth rate. With more time variation in the benchmark fundamental, the estimation results are similar and behavioral heterogeneity is significant. An important topic for future work is to investigate whether similar results can be found at higher frequencies, e.g. for quarterly, monthly weekly or daily stock market data. Let us finally discuss some other recent related work linking nonlinear econometric models to a speculative model of asset prices.3van Norden and Schaller (1999) study a time series switching model with two regimes, an explosive bubble regime and a collapsing bubble regime. The probability of being in the explosive regime depends negatively on the relative absolute deviation of the bubble from the fundamental. Stated differently, the larger the absolute relative deviation from the fundamental, the larger the probability that the (positive or negative) bubble collapses. Brooks and Katsaris (2005) extend this model to three regimes, adding a third dormant bubble regime where the bubble grows at the required rate of return without explosive expectations. Another novel feature of their extension is the observation that an abnormal trading volume is a signal of changing market expectations about the future of a speculative bubble. In their model the probability that the bubble collapses increases when trading volume becomes abnormally high. This could be related to the empirical evidence provided by Kandel and Pearson (1995) who find a significant relation between heterogeneity of analysts expectations and abnormal trading volume. These speculative models are somewhat different in spirit and do not start off, at least not explicitly, from micro foundations with heterogeneous agents and evolutionary selection of behavioral rules according to past recent performance. But these nonlinear switching models can be reconciled with our heterogeneous agent model and the framework of Brock and Hommes, 1997 and Brock and Hommes, 1998, by modifying the evolutionary fitness measure and include absolute relative deviations from the fundamental price and trading volume in the fitness measure for strategy selection. A large absolute deviation from the fundamental would then act as a far from equilibrium stabilizing force, while abnormally high trading volume would act as a trigger event for bubble collapse. A distinctive feature of our approach is that investors’ behavior is driven by short run profits. This may be particularly important for getting bubbles started. After a few positive random shocks to fundamentals, motivated by short run profits trend followers may reinforce the price rise and contribute to the start of a bubble. Another important difference concerns the probability of extreme, long lasting bubbles as in the late nineties. When investors’ expectations are mainly based upon relative deviations from fundamentals a long lasting bubble becomes more and more likely to burst. In contrast, as long as investment strategies are to a large extent driven by short run profit opportunities such bubbles may continue for a long time and cause extreme deviations from fundamentals. Further empirical work on estimating various heterogeneous agent models and determining the main driving forces of large deviations from fundamentals is an important topic for future work.