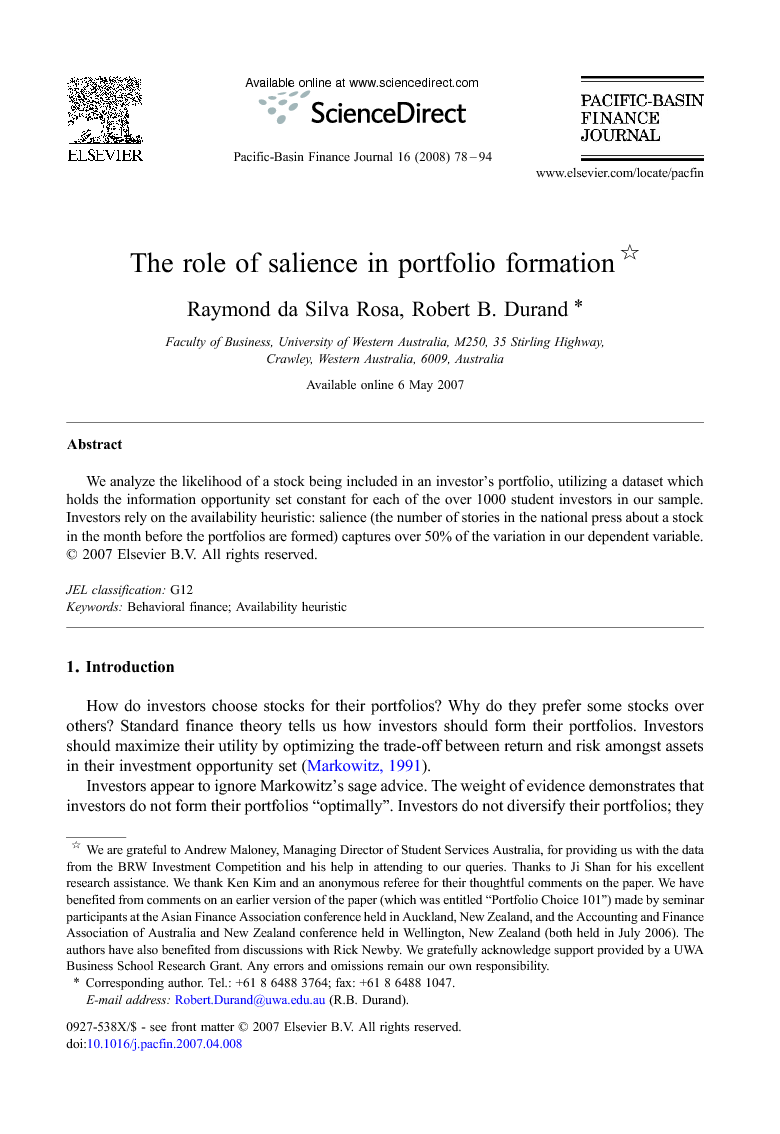 We analyze the likelihood of a stock being included in an investor's portfolio, utilizing a dataset which holds the information opportunity set constant for each of the over 1000 student investors in our sample. Investors rely on the availability heuristic: salience (the number of stories in the national press about a stock in the month before the portfolios are formed) captures over 50% of the variation in our dependent variable.

Our dataset of students entering the BRW National Student Share Portfolio Award 2003 provides a unique opportunity to study the investment decisions of a large number of investors. Given the majors of the students we observe, we expect them to be relatively well-informed about markets and investment strategies. Our study holds the information opportunity set constant for each investor and, as such, provides a strong control for the analysis of the use of information in forming portfolios. We believe that we have found strong evidence consistent with investors relying on the availability heuristic in forming their portfolios. We find that the more news items there are about the stock, the more likely it is to be included in an investor's portfolio. Indeed, over 50% of the variation in the likelihood of a stock being included in an investors portfolio is explained by our proxy for the availability of information, salience. As investors become “savvier”, their propensity to utilize the availability heuristic in the cognitive process of forming portfolios diminishes. The explanatory power of salience in capturing the likelihood of being included in an investor's portfolio is lower, as measured by the value of the adjusted R2, for our sample of streetwise investors when compared to the ingénues in our sample. We also considered a measure of abnormal salience and found that was insignificant in our analyses; we therefore concluded that it is the level of attention that determines investors' reliance on the availability heuristic, rather than the change in coverage, that grabs investors' attention.