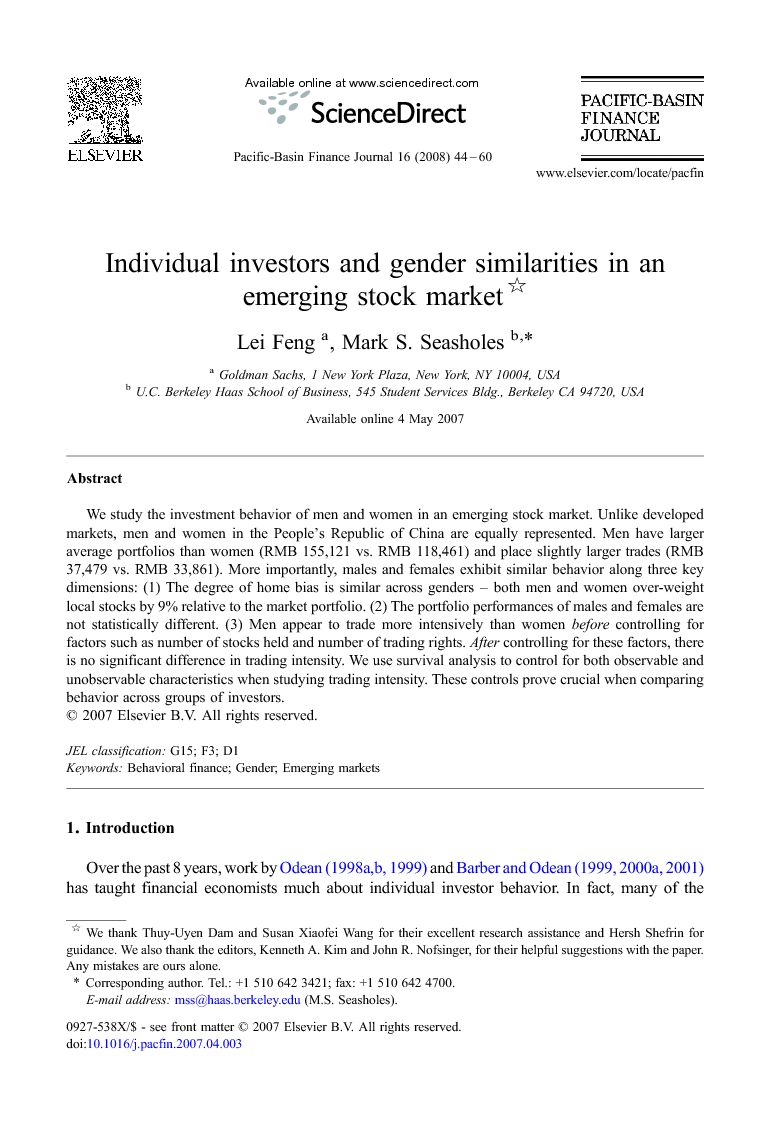 We study the investment behavior of men and women in an emerging stock market. Unlike developed markets, men and women in the People's Republic of China are equally represented. Men have larger average portfolios than women (RMB 155,121 vs. RMB 118,461) and place slightly larger trades (RMB 37,479 vs. RMB 33,861). More importantly, males and females exhibit similar behavior along three key dimensions: (1) The degree of home bias is similar across genders – both men and women over-weight local stocks by 9% relative to the market portfolio. (2) The portfolio performances of males and females are not statistically different. (3) Men appear to trade more intensively than women before controlling for factors such as number of stocks held and number of trading rights. After controlling for these factors, there is no significant difference in trading intensity. We use survival analysis to control for both observable and unobservable characteristics when studying trading intensity. These controls prove crucial when comparing behavior across groups of investors.

Over the past 8 years, work by Odean, 1998a, Odean, 1998b and Odean, 1999 and Barber and Odean, 1999, Barber and Odean, 2000a and Barber and Odean, 2001 has taught financial economists much about individual investor behavior. In fact, many of the stylized facts we know about investors stem from these papers and papers that use the same data. For example, investors tend to trade too much, trading greatly decreases an investor's net profits, and investors are reluctant to realize their losses. The papers also highlight gender differences. In the United States, men represent approximately 80% of investors while women represent only 20%. Barber and Odean (2001) show “that men trade 45 percent more than women. Trading reduces men's net returns by 2.65 percentage points a year as opposed to 1.72 percentage points for women.” The goal of this paper is to better understand gender similarities and/or differences in an emerging stock market. Do we see different levels of participation by males and females? Do we see different investment behavior? And, do we see differences in performance based on gender? The aforementioned finding that men trade 45% more than women is arguably the best known result regarding gender and financial economics and is now a common belief in the field. Our data and methodology provide an out-of-sample test of gender differences and are a direct test of the Barber and Odean (2001) findings. The main contribution of this paper comes from answering questions about the role of gender in financial markets. Our results differ markedly from existing studies. We show that male and female investors are equally represented in the People's Republic of China (“PRC”). Males have larger portfolios, on average, and make slightly larger trades. At the same time, men and women exhibit similar investment behavior along three key dimensions: First, both genders suffer equally from home bias. Second, we form calendar–time portfolios to investigate the profitability of trades by men and women. Men invest in stocks with slightly higher betas (1.0374 vs. 1.0255). Stocks men buy slightly under-perform stocks women buy. However, stocks men sell go down by more than stocks women sell. Overall, the performance (buys minus sells) of male and female investors is not statistically different. The third, and the most interesting, set of results concerns gender similarity when measuring trading intensity. Men appear to trade more than women before controlling for factors such as number of stocks held and number of trading rights.1After controlling for these factors, men and women trade with similar levels of intensity (i.e., similar turnover). Our results suggest that gender differences are related to factors such as availability of phone trading and computer trading. Such an interpretation is consistent with the Barber and Odean (2002) study of young men who are active traders. In other words, a select sub-sample of men trades very frequently. Cross-sectional statistics may very well be affected by active male traders even if they represent a small fraction of all investors. The methodology used in our paper avoids the problem of small sub-samples overly influencing population averages. We use survival analysis to control for observed and unobserved differences between investors. This paper provides an in-depth study of trading in the PRC. We examine trades and holdings from over 50,000 different individuals. Our data consist of approximately USD 1 billion in common stock holdings and over 3 million transactions. The data come from 15 branch offices of a national brokerage firm. We show the median individual in the PRC holds two stocks in his portfolio which is similar to holdings in the United States. We show a high degree of home bias. Individuals in the PRC over-weight local stocks by 9.10% more than a CAPM investor – a result which is again similar to the 14% to 18% over-weighting found in the United States. Finally, the average amount traded is USD 4500 and the average amount held by individuals in USD 17,000. Average trade sizes and holdings in the United States are less than three times larger than the corresponding amounts in the PRC even though GDP per capita in the United States is approximately ten times higher than in the PRC. The next section of the paper, Section 2, briefly reviews existing literature in the field of investor behavior. Section 3 discusses the structure of brokerage accounts in the PRC and our data. Section 4 presents results regarding gender and five areas of investment behavior: (1) holdings; (2) transaction amounts; (3) home bias; (4) portfolio performance; and (5) trading intensity. Section 5 concludes and discusses possible future research.

We study the investment decisions of over 50,000 individuals from the PRC. Our data are provided by 15 branch offices of a national brokerage firm and contain over 3 million account-stock-day transactions. The data are representative of investing in the PRC. We report cross-sectional statistics of holdings on a single day and find our investors own almost USD 1 billion of common stock. The average portfolio value by province has a 0.81 correlation with the average monthly income by province. The correlation is 0.33 with GDP per capita. In the course of our analysis, we document a number of facts pertaining to emerging market investors. Individuals hold a median of two stocks. Local stocks receive 9.1% more weight in investors' portfolios than the CAPM indicates. The average amount traded is USD 4500 and the average amount held is USD 17,000. Sells are slightly larger than buys. All of these findings match behavior found in the United States. Our most important results concern gender. Men and women are equally represented in the PRC. Men hold larger portfolios and make slightly larger trades. Importantly, men and women exhibit similar behavior along three key dimensions. First, both genders exhibit similar degrees of home bias. Second, there is no discernable difference in performance. We test and show that calendar–time portfolio returns (buys minus sells) are not statistically different by gender. Third, men initially appear to trade more intensively than women. We use survival analysis and find men have a 20.73% higher hazard of selling than women. After controlling for number of trading rights and initial portfolio diversification, the difference in hazard ratios disappears. As mentioned in the previous section, studying gender differences in the United States is clearly an area with considerable potential. We conclude by suggesting that additional research of PRC investors might focus on intranational differences. Our paper highlights two outstanding questions. How similar or different is behavior across provinces within the PRC? Can wealth or language group explain observed patterns in trading behavior?