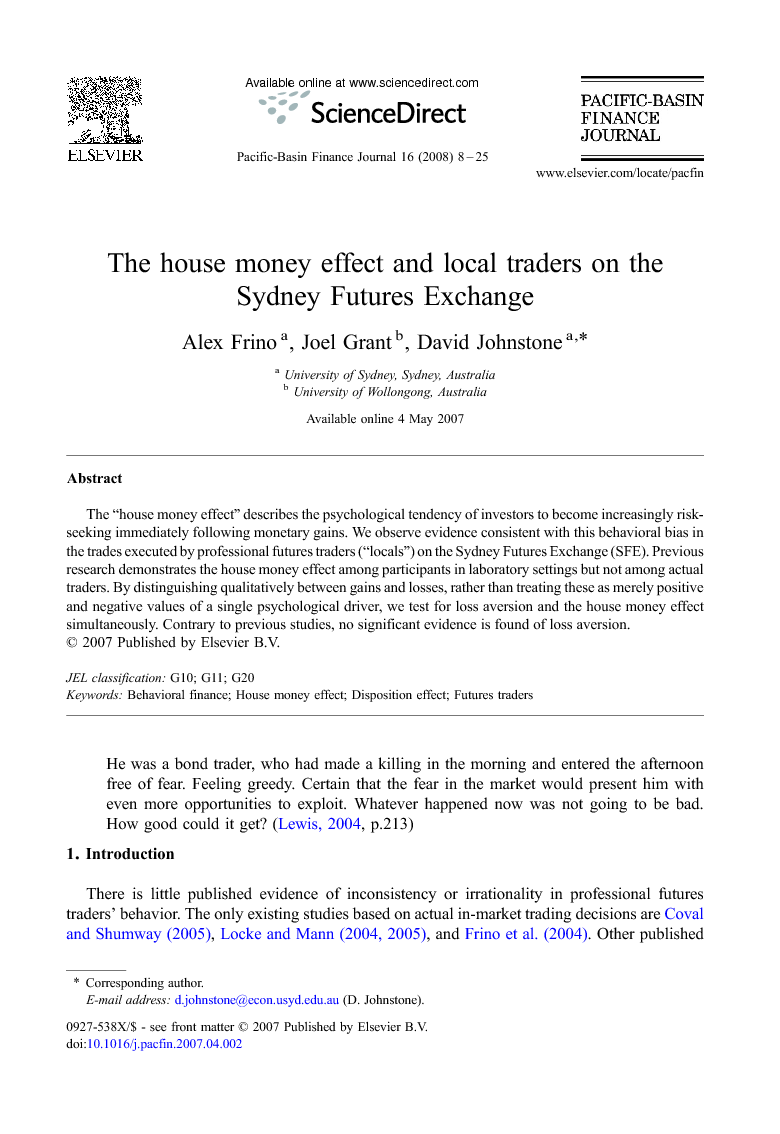 The “house money effect” describes the psychological tendency of investors to become increasingly risk-seeking immediately following monetary gains. We observe evidence consistent with this behavioral bias in the trades executed by professional futures traders (“locals”) on the Sydney Futures Exchange (SFE). Previous research demonstrates the house money effect among participants in laboratory settings but not among actual traders. By distinguishing qualitatively between gains and losses, rather than treating these as merely positive and negative values of a single psychological driver, we test for loss aversion and the house money effect simultaneously. Contrary to previous studies, no significant evidence is found of loss aversion.

There is little published evidence of inconsistency or irrationality in professional futures traders' behavior. The only existing studies based on actual in-market trading decisions are Coval and Shumway (2005), Locke and Mann, 2004 and Locke and Mann, 2005, and Frino et al. (2004). Other published studies concerning futures traders are experimental. Most recently, a laboratory study by Haigh and List (2003) found that professional CBOT futures traders show apparently greater irrationality than less experienced decision makers (students). The in-markets rather than in-laboratory trading behavior of professional futures traders is yet to be extensively documented. Thaler and Johnson (1990) note that unlike studies of other behavioral biases, there has been very little real-world empirical study demonstrating the house money effect. Laboratory studies by Thaler and Johnson (1990), Battalio et al. (1990), and Keasey and Moon (1996) document that prior gains lead to increased risk-taking in subsequent periods — the house money effect.1 This paper contributes to the literature by employing actual trading data to test for the house money effect and related behavioral inconsistencies, particularly loss aversion, among “locals” 2 on the Sydney Futures Exchange (SFE).3 Brown et al. (2005) find evidence of the house money effect among a broad population of stock market traders. We add to this study by examining the behavior of professional futures traders. Futures markets offer idealized conditions for the study of biases in one period's trading based on the trader's results in the preceding period. Whereas most market settings provide ambiguous trading horizons, futures trades by locals are most often conducted in short cycles and almost always closed out by the end of trading each day (Duffy et al., 1999, Kuserk and Locke, 1993, Kuserk and Locke, 1994 and Manaster and Mann, 1996). Other characteristics that make professional futures traders ideal for study are that they trade predominately on their own account, and are therefore not subject to agency biases in their behavior, and can trade in either direction (long or short) at any moment (Locke and Mann, 2004, p.3). It is plausible in this context of closed daily trading cycles that a trader's risk-taking may be influenced by results recorded earlier in a given day, and less likely to be influenced by profits or losses incurred on previous days (Coval and Shumway, 2005, p.7). In contrast to the Chicago Board of Trade (CBOT) and the Chicago Mercantile Exchange (CME), the SFE closed for lunch during the data period examined. The lunch break in trading provides a natural dividing point in the middle of each trading day (see Frino and Winn, 2001). Its effect is important to this study, not merely because it creates an unambiguous divide within the daily trading cycle, but because it provides traders with time to reflect upon their morning trades. In principle, this “time out” should provide a “cooling off” period and hence relieve any tendency to irrational behavior in the afternoon. Drawing on the risk-measurement methods developed by Coval and Shumway, 2001 and Coval and Shumway, 2005, we compare the levels of risk-taking by locals trading in afternoons following morning gains, and morning losses, respectively. Our results suggest that locals on the SFE exhibit a strong behavioral bias consistent with the house money effect. That is, morning profits seem to encourage locals to become risk-seeking in afternoon trading sessions. Whether this bias causes traders to make afternoon losses or reduced profits is less obvious. Our results suggest that up to a point the bravado or feeling of confidence produced by morning profits assists traders to make additional afternoon profits, but that those trades driven most strongly by the house money effect tend to result in significant losses.

This paper uses trading data from the Sydney Futures Exchange to test for behavioral biases in the trading decisions of professional traders (“locals”) in the pit. It extends the previous findings from related contexts of Frino et al. (2004), Locke and Mann, 2004 and Locke and Mann, 2005 and Coval and Shumway (2005). In contrast to the findings of Coval and Shumway (2005) and Locke and Mann, 2004 and Locke and Mann, 2005, who report strong evidence of loss aversion among professional traders at the CBOT and CME, respectively, our study finds no evidence of loss aversion among locals. There are several possible explanations of the differences in our results from those of previous studies. In particular, our analysis differs from other studies by treating gains and losses as separate and distinct psychological drivers, either of which may affect trader behavior whatever the effect of the other. If profit is not bisected this way, its influence on subsequent trading risk may be self-cancelling. That is, a profit of x or −x may have the much same large positive effect on subsequent trading risk (as shown in Fig. 1), giving the impression overall that previous trader profit (gain or loss) does not materially influence subsequent risk taking. Alternatively, suppose that profits of x and −x both lead to an increase in trading risk, but the effect of −x is stronger than the effect of x. In this case, an experimental design that treats negative and positive profits as merely different amounts of the same psychological influence will find evidence of loss aversion but not of the house money effect. Conversely, if the house money effect is the stronger of the two forces, it will be revealed, in less than its full effect, but loss aversion will not. To avoid this experimental design deficiency, we redefine profit as either a “gain” or a “loss” and include measures of gains and losses as separate explanatory variables in our model of afternoon risk taking (negative profits are treated as zero gains, and positive profits as zero losses). This design offers a more powerful test of both the house-money effect and the effect of loss aversion, which may coexist in a single market or within the possibly multiple and competing psychological biases of an individual trader. Using this experimental design, we find that locals on the Sydney Futures Exchange trade in a way consistent with the “house money effect” — that is, with a tendency to take greater risk when trading with profits rather than with initial capital. Consistent with Odean, 1998a and Odean, 1998b, but contrary to Locke and Mann (2005), our evidence suggests that there are costs to such irrational trading. Specifically, the class of trades or trader-days most affected apparently by a trader's tendency to gamble with the “house money”, namely those exhibiting the greatest morning profits and largest afternoon risks, result in the lowest afternoon trading profits. The house money effect would appear, therefore, at least in its most severe manifestation, to prompt a potentially costly departure from rational decision making, rather than a harmless eccentricity (cf. Coval and Shumway, 2005).